Erdogan Rallies Islamists Over Converting the Hagia Sophia to a Mosque 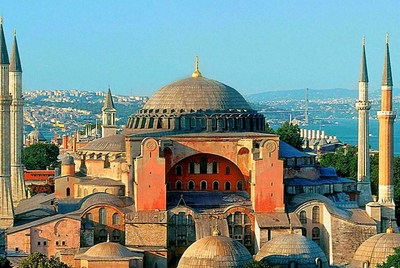 Dogged by a wide range of domestic issues and international feuds, Turkish President Recep Tayyip Erdogan is seeking to divert attention and rally support by again re-designating the status of the famous Hagia Sophia as a mosque. Turkey's highest administrative court is expected to decide within the next two weeks about the final status of the Hagia Sophia after it was delayed on Thursday.

Built in 547 A.D as a cathedral during the reign of Byzantine Emperor Justinian the Great, the Hagia Sophia was a symbol of the Byzantine Empire before it fell into the hands of the Ottoman Caliphate in 1453. That's when Mehmet the Conqueror occupied the city and converted it to a mosque. But the mosque was changed into a museum in 1935 by the founder Turkish republic Mustafa Kamal Attaturk. Since then, the magnificent structure remained a major tourist attraction.

But reverting the historic church into a mosque fits with the Erdogan regime's intensive Islamization policies that cover everything from higher taxes on alcoholic drinks and cigarettes to compulsory religious education in schools.

These policies may appeal to Islamists and conservatives, aiding Erdogan's self-proclaimed image as a global Muslim leader.

Islamists lauded the proposed transformation of the museum into a mosque. "Prayers were performed for more than 400 years, and Mehmet the Conqueror had bought its land (Hagia Sophia) and its surroundings," Egyptian Muslim Brotherhood leader and former MP Mohamed Al Sagheer wrote last Thursday. "Will Erdogan revive The Conqueror's methods and we hear Allahu Akbar in the mosque again?"

Qatari Islamist writer Faisal Al Thani detached the Hagia Sophia from its Christian roots completely, writing "Hagia Sophia ended its ties with the Church and since four centuries ago it was only a mosque... The decision to do so is a matter of sovereignty for the Turkish people. It will be joyful news that reinforces pride and identity It will be considered a historic day and the beginning of a new phase. Its title is Turkey's independence and a bright future."

But U.S. Secretary of State Mike Pompeo urged Turkey to keep the Hagia Sophia as is.

"This extraordinary site is a testament to religious expression and to artistic and technical genius, reflected in its rich and complex 1,500-year history," Pompeo said in an official statement. "Moreover, the site's status as a museum has allowed people from all over the world to access and reflect upon this magnificent achievement.

The United States views a change in the status of the Hagia Sophia as diminishing the legacy of this remarkable building and its unsurpassed ability—so rare in the modern world—to serve humanity as a much-needed bridge between those of differing faith traditions and cultures."

Mauritanian Muslim Brotherhood writer Mohamed Al Shinqiti scoffed at the American position. "Did the US Secretary of State ever demand that Muslims to be permitted to pray at the Cordoba Mosque (which is now a Catholic Church) which was a request by the Spanish Islamic Council for decades?! Or does it remember religious tolerance and human coexistence only in the case of Hagia Sophia?"

The Cordoba Mosque became a church in the 13th century, hundreds of years before there was a United States or a secretary of state.

Not all Muslims support the Turkish plans. The Egyptian based Global Fatwa Index, which aims to counter terrorist fatwas, issued a statement June 7 that mentioned Hagia Sophia served as a church for 916 years before the Ottomans took over Istanbul in 1453 and made it a mosque. "The Turkish regime is exploiting the issue of converting the Hagia Sophia to a mosque became an electoral weapon" for Erdogan.

"The potential conversion of Hagia Sophia into a mosque will turn millions of Christians around the world against Islam," said Greek Orthodox Church Ecumenical Patriarch Bartholomew. "We hope that wisdom and reason ultimately prevail."

The United Nations Educational, Scientific, and Cultural Organization UNESCO designated Hagia Sophia as a world heritage site in 1985, and the agency expressed its alarm about the likely changes. UNESCO wrote to Turkish authorities stressing that it must approve any status changes for a cultural heritage site.

Meanwhile, the Greek government warned Turkey that it risks opening a "huge emotional chasm with Christian governments" if it makes the change. "What the Turkish government and President Erdogan are attempting to do today revives and reignites fanatical nationalist and religious sentiment," Greek Minister of Culture Lina Mendoni wrote in a letter to UNESCO. "It is an attempt to reduce the monument's value and international radiance."

Erdogan has rejected such criticism. "Greece is not the one administering this land, so it should avoid making such remarks," he told Turkey's state-owned news network TRT. "If Greece doesn't know its place, Turkey knows how to answer."

Converting the Hagia Sophia serves Erdogan's purpose to rally his Islamists supporters, and could win support from some Muslims worldwide who oppose Turkey's military interventions in Iraq, Syria and Libya. Still, there is likely to be a political price internationally as Erdogan slowly eradicates what's left of secular Turkey.