Hamas officials work openly with Malaysian Islamist charities to route money and supplies to government ministries and charities in Gaza, new findings by the Investigative Project on Terrorism (IPT) show. The charities also use their humanitarian veil to promote the violent rhetoric of Hamas and other Palestinian terrorist groups.

The findings are concerning given Malaysia's increasingly significant role in Hamas operations that was spotlighted once again after authorities uncovered a plot Feb. 15 to target Israelis in the Philippines.

A Hamas "Filipino source" made several trips to Malaysia during 2016-2018 to receive bomb-making training and to discuss attacks against Israelis in the Philippines with a member of the terrorist group's foreign operations, the Philippine National Police said in a statement.

The Hamas member, identified as "Bashir" by the source, is Fares Al Shikli, the alleged head of Hamas's Foreign Liaison Section. The "source" and Shikli discussed enlisting Filipinos with connections to local militant groups "to kill Jews present in the country, conduct rallies at selected embassies and spread video propaganda in exchange of financial support."

An Interpol red notice has been issued against Shikli, who has been charged with "terrorism logistic support."

The rising power and influence of hardline Islamist parties and organizations in Malaysia has created a conducive environment for Hamas to operate there with impunity.

A Hamas rocket expert was assassinated in Kuala Lumpur in 2018. A terrorist confessed in 2014 to receiving training in Malaysia to paraglide from Gaza into Israel to carry out terror attacks. Another operative with a doctorate in computer science served as a courier for encrypted messages for Hamas's military wing, the Izz al-Din al-Qassam Brigades.

In December, the World Squash Championship in Malaysia was canceled after the country declined to issue visas to "Zionist athletes." Hamas praised the Malaysian action.

"Malaysia's refusal reflects the genuine stance against all forms of normalizing ties with the Israeli occupation and supports the Palestinian people and strengthens their steadfastness in the face of the occupation," said Hamas spokesman Abdul Latif Al-Qanoua.

It now appears Hamas operations in Malaysia are not just restricted to terrorist recruitment and training.

The misuse of Islamist charitable organizations to support terror is not new. Islamist charities, including Hamas charities, have been known to use humanitarian assistance as a cover to solicit funds for terrorist groups and promote extremist propaganda.

"While some terrorist supporters create sham charities as a cover to raise and move funds, other terrorist groups and their supporters use charities to provide funds or otherwise dispense critical social or humanitarian services to vulnerable populations in an effort to radicalize communities and build local support," says the Treasury Department's 2015 National Terrorist Financing Risk Assessment.

Al-Najjar spoke at a February 2020 demonstration in front of the U.S. embassy in Kuala Lumpur to protest the Trump administration's "Deal of the Century" that sought to solve the Israeli-Palestinian conflict. "We are very grateful for your government for having zero normalization with the Zionist entity," Al-Najjar told the crowd. "We wish that such stance and position would continue inshallah (God willing) forever in the liberation of Palestine."

The foundation lists among its objectives the need to "accurately introduce and inform the issue of Al-Quds [Jerusalem] and Masjid Al-Aqsa [Temple Mount]" to the Malaysian people and "[r]eveal the brutal practices of the Israeli occupation against Al-Quds and its Islamic and Christian sanctities."

"The biggest Malaysian support for Hamas is to keep the Palestinian issue part of the country's official discourse and encourage its charitable organizations to play a humanitarian role in Gaza to alleviate its harsh living conditions, as well as continuing to allow Palestinians to enter it without a visa. Palestinians constitute the largest Arab community in Malaysia," Shammalah told Al-Monitor in December 2019.

"The official and popular support and appreciation of Hamas in Malaysia serves as an outlet for the movement in Southeast Asia and contributes to strengthening its relations with countries neighboring Malaysia," he added.

The Al-Quds Foundation has influence at the highest levels of Malaysian society. Malaysian politician Datuk Mukhriz bin Tun Dr Mahathir, the son of Malaysia's former anti-Semitic prime minister Mahatir Mohamed, is chairman of the Al-Quds board of trustees. At the December 2019 Kuala Lumpur Islamic Summit, Mukhriz Mahathir participated in a roundtable session, "The Role of Politics in Development" along with Hamas leader Khaled Mashaal.

Fadi Al-Batsh, the Hamas rocket and drone expert killed in 2018, worked for the charity Humanitarian Care Malaysia Berhad ("MyCARE"). Al-Batsh was shot dead while walking from his Kuala Lumpur home to a mosque for prayers.

Citizen's International published an open letter Shammalah addressed to al-Batsh's daughter Duaa, recounting his experiences with al-Batsh as students at the Islamic University of Gaza. "Do not be surprised, my daughter... The occupation that killed him cannot handle seeing a successful Palestinian alive and thriving, but rather wants to see all Palestinians dead, even if after seventy years of Nakkba," the letter said.

Intelligence officials suspected al-Batsh used Malaysia as a base to negotiate arms deals with North Korea. In fact, around the time of al-Batsh's killing, Egypt reportedly seized a shipment of North Korean communications equipment for guided munitions bound for Gaza. Al Batsh is believed to have helped negotiate the deal. Israel has denied allegations that its Mossad spy agency was behind the killing. In January, Hamas announced it had captured a Gaza Palestinian who it claimed had collaborated with Mossad in al-Batsh's killing.

In May 2020, MAPIM (Malaysian Consultative Council for Islamic Organization) published an obituary for Hamas politbureau member Ahmed Alkurd. "To say he is a person full of smiles that welcomes all NGOs to this land of blessing, in the capacity of former Ministers of Labour and Welfare...and heads of local humanitarian works in Gaza," the obituary said.

BDS seeks to isolate Israel economically and culturally, and is considered anti-Semitic in part because it singles out the world's only Jewish state and ignores countries with far worse human rights records.

VPM co-hosted "Galeria de Palestina," in August 2019 along with BDS Malaysia and MyCARE to "learn how to free Palestine from the Israeli Zionist regime," a translation of the event announcement on Facebook said.

Another Malaysian Islamist charity, Aman Palestin, has a Facebook page replete with pro-Hamas propaganda. "Thousands of #Gazans in the city of Rafah in the southern Gaza Strip rally to commemorate the 34th anniversary of Ha.m.a.s (sic)," reads a Dec. 14 post. The post was accompanied by several photos from the celebrations. The group has celebrated the Hamas anniversary before. 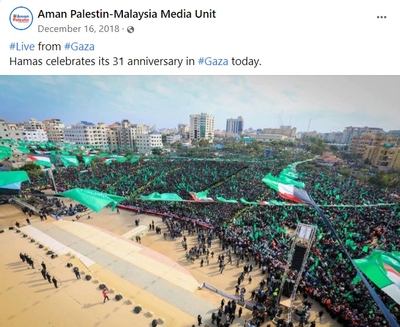 An earlier post about Ahmed Yassin described him as "one of the most important symbols of the Palestinian national work throughout the last century."

Hamas Prime Minister Issam al-Da'alis was a guest speaker at the dedication of a new mental health and rehabilitation center in Gaza funded by Malaysian Islamist charity Aman Palestin.

"All respect, appreciation and thanks to this prestigious institution Aman Palestin, for the generous efforts to the people of Palestine," said al-Da'alis. "This is not strange for the people of Malaysia and the Malaysian government and parties as they are generous brothers who care about the Palestinian cause as they care about their country."

Another charity, Viva Palestina Malaysia (VPM), is a regional offshoot of an Islamist charity formerly registered in the UK that has sought to support and legitimize Hamas, rather than provide aid to the needy.

Viva Palestina delivered cash and supplies to Hamas officials in Gaza. During a March 2009 address in Gaza, Galloway said he personally handed "three cars and £25,000 in cash" to the Hamas leadership. "This is not charity," Galloway said as he held up a bag full of cash. "This is politics." He boasted that he was about to "break the sanctions on the elected government of Palestine" and "give all our vehicles, our keys, our aid, our money to Ismail Haniyeh, the elected prime minister of Palestine."

VPM's website brags about its participation "in the last two convoys organised by Viva Palestina UK, both with resounding success. In the latest convoy, VPM was represented by six cars and 12 drivers with a combined aid worth over RM300,000 [US$71,667]."

Malaysian charities participated in the "humanitarian convoys" as part of the "Lifeline4Gaza," including in the 2010 Mavi Marmara flotilla that violently tried to break Israel's blockade on Gaza. The voyage ended with nine people dead after passengers attacked Israeli commandos with knives, metal bars and other weapons as they tried to take control of ship.

An inquiry opened by the UK Charity Commission into Viva Palestina's fundraising activities in connection with the Gaza convoy concluded the organization did not provide money to Hamas. It found that Viva Palestina exaggerated the amount of money it raised. Even as Viva Palestina claimed more than £1 million in aid was delivered during the first convoy, its books showed the group raised less than a fifth of that amount. Galloway told investigators that the bag of cash he gave a Hamas official in 2009 contained his own money, not Viva Palestina's.

Malaysia provided the staging ground for the recently foiled plot to launch terror attacks against Israelis in the Philippines. The plot was planned in Malaysia and the "Filipino source" recruited to perpetrate the attacks received bomb-making training in the country. This leaves no doubt that Hamas's extensive fundraising and propaganda network in Malaysia provides an enabling environment for jihadists to plot similar future attacks targeting Jews.