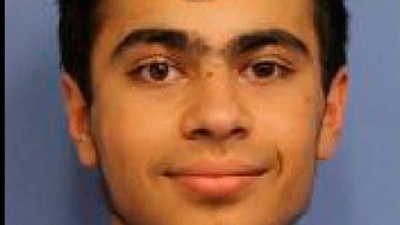 Alsahli opened fire at the air station's North Gate May 21. A guard was shot, but survived with minor injuries thanks to the bulletproof vest she was wearing. Guards returned fire, killing Alsahli.

He moved to the United States from Syria in 2014, according to Todd Bensman, a former manager with the Texas Department of Public Safety and Counterterrorism who currently serves as a national security senior fellow with the Center for Immigration Studies. Alsahli obtained U.S. citizenship while living abroad because his father was a naturalized American.

His Linkedin profile shows he attended Umm al-Qura University in Mecca, Saudi Arabia, a Salafist Islamic school with a long history of inspiring al-Qaida leaders. Muhammad Qutb, brother of Muslim Brotherhood ideologue Sayyid Qutb, taught at the school for years, inspiring his students with his brother's jihadist ideology. Muhammad Qutb instructed his students that Muslims should hate infidels and have enmity toward them.

Muhammad Qutb inspired bin Laden, Ayman al-Zawahiri and Safar al-Hawali, who also taught at Umm al-Qura University. Al-Hawali, a student of Muhammad Qutb's, became an early bin Laden supporter. He accused the West of trying to undermine Islamic society from within after American troops were deployed in Saudi Arabia after the Iraqi invasion of Kuwait. This same event triggered bin Laden's animosity against the United States.

Al-Hawali published a book in 2018 called "Muslims and Western Civilization" that renewed the call for jihad against the West, including suicide attacks. The book's publication led Saudi authorities to arrest him that year.

"It is part of jihad to revive martyrdom operations that spite the enemy greatly. They are kind of infiltrating the enemy and they display the courage of Muslims and their love of martyrdom, and they terrorize the hearts of their enemies," Al-Hawali's book said. 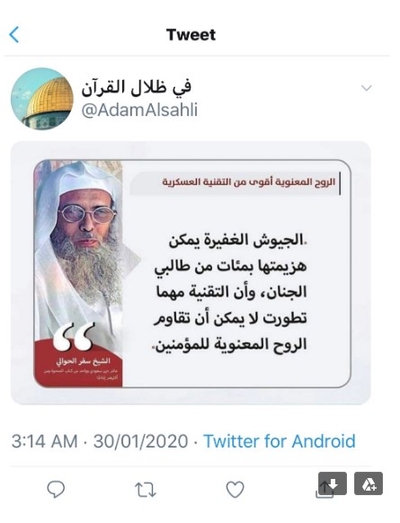 "The moral spirit is stronger than military technology," it says. "The huge armies can defeat it with hundreds of those seeking Heaven. Technology no matter how developed cannot resist the moral spirit of the believers."

Alsahli also complained about Saudi Arabia's detention of Salman al-Odah, a close associate of al-Hawali's in the Muslim Brotherhood-inspired Saudi Awakening Movement of the early 1990s. Al-Odah spread anti-Western and anti-Semitic ideas as a leader of that movement. He also was a mentor of bin Laden's.

"May Allah Bless him and grant him peace and his membership in the International Union of Muslim Scholars and the European Council for Fatwa. Do the scholars silence this crude audacity?" Alsahli wrote about Al-Odah.

Al-Odah was arrested in 2018 on 37 charges, including incitement against the Saudi monarchy and involvement in the creation of Syria's former al-Qaida affiliate Jabhat al-Nusra.

Brotherhood-linked groups including the Council for American Islamic Relations (CAIR) also have called for al-Odah's release.

Al-Odah and Al-Hawali signed a 2004 letter calling for jihad against U.S.-led forces in Iraq.

"Fighting the occupiers is a duty for all those who are able. It is a jihad (holy war) to push back the assailants," the letter said. "Resistance is a legitimate right. A Muslim must not inflict harm on any resistance man or inform about them. Instead, they should be supported and protected." 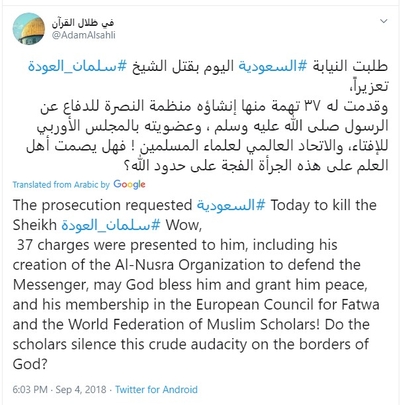 Alsahli also posted several videos of IUMS founder Sheikh Yusuf Qaradawi on his Facebook and Twitter pages, including a video that called for Muslims to rise up in defense of Jerusalem.

"Where is [the] Islamic world in what is intended for Jerusalem? ... Our nation cannot stand in silence on this injustice," Alsahli wrote.

Al-Qaida and the Muslim Brotherhood share many of the same ultimate objectives and dreams of spreading Islamic law across the globe. Al-Qaida founders, including bin Laden, al-Zawahiri and Abdullah Azzam, all originally belonged to the Brotherhood. But many grew impatient with the Brotherhood's multi-generational approach, rooted in first educating the masses, and split off to form jihadist groups ready to act immediately.

Both aim for the creation of a global Caliphate but disagree on how to build one.

Jeffrey Bale, a professor at the Middlebury Institute of International Studies at Monterey, who focuses on violence-prone political and religious extremists, finds the terrorist's sympathies for Brotherhood-linked figures like al-Odah, Qaradawi and others unsurprising.

"Even though the two organizations disagree bitterly about the best methods or tactics to use to achieve those goals, the bottom line is that they share the same Islamic supremacist goals," Bale told the Investigative Project on Terrorism (IPT). "This shooter was clearly too impatient to embrace the MB's gradualist strategy for Islamizing societies and coming to power. So instead he opted to wage armed jihad."