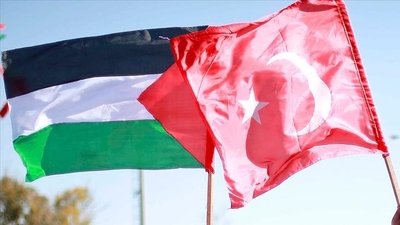 As fighting rages between Israel and Palestinian terrorist groups in Gaza, Turkey's President Recep Tayyip Erdogan is trying to balance ties to the West with his desire to be a regional hegemonic power and appear as a champion of the Palestinian cause.

Turkey's foreign policy toward Israel over the past decade is based on a pattern of sudden ruptures followed by periods of relative balance and attempts at rapprochement. When Turkey resorts to its neo-Ottoman aspirations, relations with Israel are complicated. Once again, Turkey attempts to project influence by steadfastly supporting Hamas in its latest confrontation with Israel, as Israel has become the target of Hamas missiles.

The continuing threat that Hamas poses for Israel is supported not only by non-state Islamist circles, but also by Turkey, a state that pretends to be a part of the Western security nexus. As the new terrorist attacks against Israel continue, Turkey repeats its coordination of anti-Israel sentiments. As tensions escalated this month, Erdogan:

Turkey once again incites anti-Israel aggression and hostility calling on all Muslims to united against Israel, and attempts to take advantage of anti-Israel mentality in the Islamic world. "Apart from our President," wrote AKP spokesman Ömer Çelik, "no one is seen trying to mobilize the world. The efforts of our President are the strongest will of our Palestinian brothers and sisters for human conscience and justice."

Turkey's communications director Fahrettin Altun further elaborated that Erdogan "continues to defend the independent Palestine and our Palestinian brothers against Israel, which is increasing its terrorist acts and occupation attempts."

Turkey tapped pro-government and state-controlled media outlets, such as Daily Sabah, Anadolu Agency and TRT to promote a one-sided narrative of the conflict. In this narrative, Turkey is portrayed not only as the defender of the Palestinians, but also the defender of the holy Islamic sites in Jerusalem. By using the Palestinian issue and attacking Israel, Turkey attempts to gain credibility among Islamic populations worldwide after its ongoing diplomatic isolation and failures in its foreign policy. It is clear that, despite recent attempts to project a moderate view of itself vis-a-vis the United States and Arab states of the region, Turkey resorts to its usual pattern of interference and employment of neo-Ottomanism, an ideological current focusing on revival of a "greater Turkey" that aspires to lead the Islamic world.

We should remember that Erdoğan's Justice and Development Party (AKP) and Hamas have roots in Muslim Brotherhood networks. They share a similar anti-Western, anti-Israel ideology. Turkey's ties to Hamas – and specific members who are Specially Designated Global Terrorists – have been extensively documented. Hamas officials and Egyptian Islamists have found shelter and have been free to pursue their financing and planning their operations there. For example, Hamas finance chief Zaher Jabarin developed a financial network in Turkey that enabled Hamas "to raise, invest, and launder money prior to transferring it to Gaza and the West Bank," a 2019 U.S. Treasury Department statement said.

Turkish presence in the Palestinian territories, and especially the Hamas-controlled Gaza Strip, is cemented by official agreements and its actions are conducted under the guise of technical and humanitarian assistance. Turkey is already implicated in upgrading Palestinian military structures and forces against Israel.

The Turkish Cooperation and Coordination Agency (TIKA), a relief agency, has permanent offices in the Gaza Strip and in Ramallah. TIKA funds are channeled to various field organizations controlled by Hamas, thus indirectly supporting Hamas operations. İHH (Humanitarian Relief Foundation) is a radical anti-Western and anti-Israeli Turkish NGO, also present in Gaza. İHH has been designated as a terrorist organization by Israeli authorities since 2008 due to its funding of Hamas' military wing. IHH was also implicated in the notorious 2010 Mavi Marmara incident, when a flotilla trying to break a blockade on Gaza was boarded by Israeli commandos. Passengers attacked the Israeli troops, causing the soldiers to fight back, killing 10 people.

Erdogan broke off diplomatic relations with Israel and accused it of lying about the incident.

In addition to supporting Hamas, İHH has cooperated with radical Islamist groups in Algeria and Iran by helping with counterfeited passports, weapons trafficking, and assisting mujahideen to reach various war zones, such as Bosnia and Chechnya.

As Turkey provides financial assistance to Gaza through TIKA and IHH, it consciously assists Hamas, which can focus solely on preparing its aggression against Israeli civilians. Once again, Turkey proves to be an invaluable diplomatic ally of Hamas.

By appealing to the Muslim world and using the Palestinian issue as a pretext, Turkey repeats its attempt to head the Islamist International. Turkey has since long decided to part ways with the Western world and its values by affiliating itself with radical Islamists. It is time for the United States and for NATO to realize that Turkey is a state acting in contrast to the shared values and the geostrategic interests of the West.