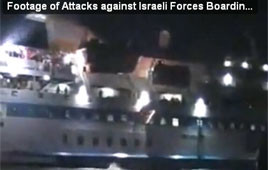 Condemnations of Israel's commando raid on the flotilla trying to break a blockade on Gaza are pouring in after 10 people were reported killed in the violence at sea early Monday.

Egypt announced Tuesday that it would open its border with Gaza, which Reuters describes as "a major boost for Hamas and a blow to efforts by Israel and its Western allies to cripple the Islamists." Turkey is threatening to send more ships, escorted by its own navy, while there are fears Hizballah will use the incident to justify a new wave of rocket attacks toward Israel.

Was it, as some suggest, the plan of flotilla organizers all along?

It's worth remembering why the aid was being transported by sea in the first place. A convoy led by then-British MP George Galloway ended in violence at the Egyptian-Gaza border in early January after authorities delayed their entry into Gaza.

An Egyptian police officer was shot and killed by Hamas gunmen. Egypt deported Galloway, made it clear he was unwelcome there again, and told the convoy it could no longer enter through its crossing. Galloway's partner in that convoy was the Turkish-based International Humanitarian Relief Foundation (IHH), which helped lead the flotilla.

IHH was a key player in the Free Gaza Movement flotilla. Israeli officials say IHH is tied to Hamas, and even to al Qaeda, and it was banned in Israel in 2008 for being "part of Hamas's fundraising network." Court papers in the U.S. prosecution of Abdurahman Alamoudi also tie it to terrorist activity, citing French intelligence expert Jean Louis-Bruguiere's assessment that IHH played "[a]n important role" in the Millennium bomb plot.

IHH also is part of the Union of Good, a collection of charities run by Muslim Brotherhood spiritual leader Yusuf al-Qaradawi. The union was designated by the U.S. Treasury Department in 2008 as a terrorist entity due to its fund-raising activities on behalf of Hamas and Hamas-controlled organizations in the West Bank and Gaza.

During the past year, the Investigative Project on Terrorism has chronicled the Hamas-ties of relief convoy participants, led by Galloway. In March 2009, he defiantly handed a bag of cash directly to a Hamas minister and announced that:

"By Allah, we carried a lot of cash here. You thought we were all fat. We are not fat. This is money that we have around our waists ... We are giving you now 100 vehicles and all of the contents. And we make no apology for what I am about to say: We are giving them to the elected government of Palestine; to the Prime Minister Ismail Haniyeh."

After the January convoy, a Palestinian media outlet reported that Hamas political and militant leaders were fighting for control of $1 million delivered in the Viva Palestina/IHH convoy. And last week, before the confrontation on the Mediterranean, Palestinian political scientist Talal Okal told the Christian Science Monitor that Hamas controls anything that comes in from the relief efforts. Hamas activists were even seen driving ambulances the convoy left behind:

"They want to show that they dominate everything, and that everything in Gaza passes under their eyes. So, if these boats arrive, Hamas will receive it [the aid] and distribute it how they want, to their supporters and according to their policies."

With that in mind, Israel's concern that the flotilla might carry goods Hamas could use in weapons and explosives isn't so far-fetched.

In Monday's violence, the videos speak for themselves. Israeli commandos were beaten as they landed on the ship's deck by men wielding pipes, knives and other weapons. One commando said he thought the crowd was trying to lynch him. Israeli officials say the initial plan was to use paintball guns to gain control of the ship and that the navy team had handguns for use only if their lives were threatened.

Flotilla members grabbed at least one gun from a soldier, contributing to the decision to fire back, Israeli military officials said.

The Israelis, it seems, weren't prepared for what met them. But any notion that the ship carried peaceful activists is ludicrous. They wanted a confrontation.

According to London's Times, a flotilla passenger told a reporter during a stop in Cyprus:

"We are now waiting for one of two good things — either to reach Gaza or achieve martyrdom."

She was not alone.

"Yesterday, the commander of the fleet said: 'We will not allow the Zionists to come near us, and we will wage resistance against them.' With what will they wage resistance? With their fingernails. These are people who wish to be martyred for the sake of Allah. As much as they want to reach Gaza, the other option is more desirable to them."

As it turns out, they had much more than their fingernails. Clubs, knives and slingshots are among the weapons found on the ship and seen on the video in attacks on the commandos.

It's clear, though, that the commandos were not the ones looking to hurt people. The Times report indicates passengers on five other ships in the flotilla were trained in non-violent resistance. Israeli forces took control of those ships without reports of any injuries. They were taken to the Israeli port at Ashdod where officials pledged genuine humanitarian supplies will go to Gaza's civilians.

That's what officials said would happen when they urged the flotilla to give up peacefully:

"Delivery of the supplies, in accordance with the authority's regulations will be through the formal land crossings and under your observation, after which, you can return to your home ports aboard the vessels on which you arrived."

Contrast that with the message flotilla participants conveyed from the beginning. Passengers chanted "Khaibar, Khaibar ya Yahud Jaysh Muhammed Safayood" (Khaibar, Khaibar, oh Jews! The army of Muhammad will return!")

That's a taunt invoking a massacre of Jews.

Der Spiegel writer Christoph Schult thought the Israelis over-reacted, but recognized the passengers were spoiling for a fight:

"But as the Israeli army stormed the largest ship, the Mavi Marmara, the activists they encountered were in no way exclusively docile peaceniks. Some of the 'peace activists' received the Israelis with crow bars and sling shots. Some of the self-professed "human rights activists" reportedly even tore the weapons from soldiers and began to shoot.

Even Israelis and their supporters are openly wondering whether the country fell into a trap – designed to provoke Israel into action that cost it more in international pressure than in upholding its blockade of Hamas in Gaza.

Lost in all of this is the reason there is a blockade on Gaza at all. When Israel ended the occupation of Gaza by unilaterally withdrawing – even removing its own citizens by force – Hamas responded with increased terror attacks and launching thousands of crude rockets at Israeli civilians. It also kidnapped an Israeli soldier, Gilad Shalit, and has refused to hand him back after four years.

Newsweek's Joe Klein, a frequent critic of Israeli policy, noted the underlying causes in a column about the flotilla attack:

"And the blockade is not total--food and humanitarian supplies are allowed through by the Israelis, which renders the humanitarian aspects of the flotilla redundant. The real purpose of the flotilla is to dramatize the inhuman conditions in Gaza. But those conditions are as attributable to Hamas's behavior, especially its refusal to release Shalit and to negotiate, as they are to Israel's intransigence. If I were an Israeli--even an Israel opponent of the Netanyahu coalition--I would be utterly opposed to making concessions to an organization as historically intransigent and violent as Hamas, unless there were signs that Hamas was willing to behave more reasonably."

What flotilla organizers call the legitimate government in Gaza is a murderous band of religious fanatics who seek no compromise, no peace that recognizes the state of Israel and calls for its destruction. Monday's violence will only entrench their hard line.

its so sad that the ones who bear the brunt of violence are often those who have no power...children need food and medical supplies no matter what Hamas or the Israeli hard liners believe; I don't understand why the United Nations is not allowed to deliver needed aid to the poverty stricken people of Gaza. Allowing women and children to suffer is a poor policy and its too bad that the US govt is unable to help. Surprising that the world looks away while this death by neglect policy is in place.

Although I'm a consumate liberal, I absolutely agree with most of McCarthy's points. I joined the Navy after our hostages were in Iran for over a year while Jimmy Carter meandered aimlessly through diplomatic channels trying to appease Islamic radicals. It was embarrassing and pathetic...

Granted, we should have never propped up the Shah in the first place but to see Muslims burn our flag and efigies of Carter shouting "Death to America!!" was a bit over the top.

That was over 30 years ago and, time after time, it's painfully obvious that force and strength NOT diplomacy are what jihadists respond to. So whenever people argue in favor of peaceful alternatives all I do is briefly point out the results Carter achieved in 444 days vs. what Reagan accomplished his first hour in office. The silence afterwards is deafening...

That's why I think we should have finished the job back then. Because if McCarthy is as right as he appears, then it's entirely possible that there are thousands of militant store clerks at over half the gas stations (and many critical infrastructure computer terminals in the U.S.) who are simply standing their posts. Mark my words...

So, regardless of whether you're liberal or conservative, we must all be vigilant and constantly aware. Ignorance and apathy are not options at this point.

Reason for the blockade?

If there ever was a reason for the blockade, I guess the Israeli strategists are starting to realize how stupid this move was by them. They managed to extinguish secular palestinian movements, and are left with a Hamas that they can not beat, neither on the negotiation table, with fosfor bombs, or a naval blockade. Tough luck.

I condemn the Islamists and strongly suggest a reform of Islam. I comdemn all UN nations that condemn the actions of the Israel Defense Force. I condemn all terrorists, insurgents, martyrs and wannabe caliphs.

And as far as the flotilla, frankly, I do not trust the leaders and disruptors in Gaza, West Bank, basically most of the Middle East Muslim leaders. And the organizers of this flotilla and activists delivering the goods are questionable, as well.

Am I a bit harsh?

I linked the report to the following weblog comment