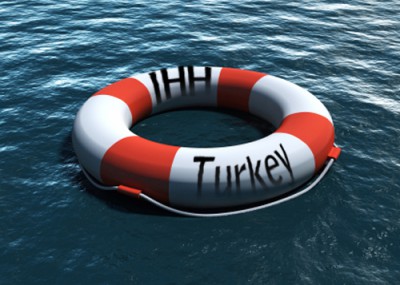 Turkey's prime minister has called for United Nations sanctions on Israel at the same time that Turkish prosecutors are threatening to indict Israel's prime minister and others in connection with the 2010 Mavi Marmara flotilla raid. Coupled with other aggressive moves, including threats to break Israel's Gaza blockade with military force, Turkey is waging a diplomatic war on its former ally.

Leading the charge is Turkey's Islamist Prime Minister Recep Tayyip Erdoğan, who has become one of Israel's most outspoken critics on the international stage. Erdoğan has repeatedly attempted to humiliate and isolate Israel internationally, while forging military and intelligence ties with nations sponsoring terrorism against the Jewish state.

On Monday, Erdoğan told Time Magazine that "Israel's cruelty … cannot be continued any longer," before calling for U.N. sanctions. Without an Israeli apology over the May 2010 flotilla raid, "the relations between the two countries will never become normalized," he said.

Turkish prosecutors also compiled a list of 174 Israelis, topped by Prime Minister Benjamin Netanyahu, Defense Minister Ehud Barak, and Israeli military officials for possible indictment over the flotilla incident. Although the Turkish government claims that the list was drawn up by the Turkish-based group IHH, which led the flotilla, the Turkish newspaper Sabah claims that Turkey's intelligence agencies were involved. Another Turkish newspaper, Zaman, even claimed that Turkish intelligence agents had operated inside of Israel to discover the identities of those listed.

Israeli officials challenged the list's validity, saying the names "were rather recycled from previous lists that were published on anti-Israeli websites following Operation Cast Lead" in reference to the December 2008 incursion into Gaza to take out Hamas missile capabilities. Military officials added the report is part of a psychological warfare conducted by Turkey.

Erdoğan's most recent comments and the planned indictment follow a month of Turkish diplomatic attacks on Israel.

On Monday, Erdoğan also accused Israel of manipulating the Holocaust to inspire international guilt, while carrying out attacks that killed "hundreds of thousands" of Palestinians. "Israeli people are only resorting back to the issue of genocide in history. And using that genocide [the Holocaust] they are always acting as if they are the victims all the time," he said.

"So Germany has and is still paying its dues to Israel. But neither Turkey nor the Muslims in the region have such a problem [of genocide]; they have never exerted such cruelty on Israel. But Israel is very cruel in that regard. It shows no mercy," he added.

Turkey is accused of waging genocide against Armenians starting in 1915, with 1.5 million people killed. Government officials refuse to acknowledge this history and withdrew its ambassador to the United States last year after a House committee passed a resolution calling on the president to label the event a genocide.

Erdoğan has also been called out for hypocrisy over the Palestinian issue, when Turkey's Kurdish community has endured years of repression.

Still, Erdoğan pledged earlier this month that Turkish warships would protect future vessels trying to break Israel's blockade of the Hamas-run Gaza Strip, a move sure to raise tensions between the two nations. "The main mission of Turkish military ships is to protect Turkish vessels. This is their duty. We will send humanitarian aid to [Gaza], and this aid will not be subject to any attack like the one on the Mavi Marmara. If they are attacked, the attackers will meet an appropriate response," Erdoğan said in an interview with Al-Jazeera television.

The interview followed the release of a United Nations report on the 2010 flotilla clash, which upholds Israel's maritime blockade of the Gaza Strip. Furious that Israel would not apologize for the death of the nine Turks killed on the Mavi Marmara, Erdoğan also expelled Israeli diplomats and suspended military and defense ties with Israel.

Erdoğan supports IHH, the Turkish group which deliberately orchestrated the violent flotilla clash. IHH is under investigation for possible designation as a terrorist group by the U.S. State Department and has ties to Hamas.

"While there may not be any evidence of a direct link here, there can be no mistake that the Erdoğan government is morally and politically behind this group – the İHH," columnist Semih Idiz wrote in Turkey's English daily Hurriyet after the flotilla clash.

A report published by the Meir Amit Intelligence Center in January cited IHH statements that the flotilla received direct support from Erdoğan and several ministers. That included money, logistical support, satellite communications, the use of harbors and political propaganda support. IHH leader Bulent Yildirim maintains a relationship with senior government leaders including Erdoğan.

IHH "has helped Prime Minister Recep Tayyip Erdoğan shore up support from conservative Muslims ahead of critical elections next year and improve Turkey's standing and influence in the Arab world," the New York Times reported in July, 2010.

Despite Erdoğan's emphasis on the flotilla clash, he was accusing the Jewish state of murder years earlier. "You shall not kill," he said in Hebrew during Israel's 2009 war to stop Hamas terrorists from firing rockets into Israeli towns. Israel's counterterrorism effort, he said, was "defying the world and mocking the world," before asking how the Jewish state dared "to enter the doors of the UN."

He stormed out of a Davos forum meeting in January 2009 after telling Israel's president, "When it comes to killing – you know killing very well."

Erdoğan declared his support for Hamas during a May interview, saying it was a sign of "disrespect" to Palestinians to call the group a terrorist organization.

The struggle against Israel is one facet of the Muslim nation's new Islamist foreign policy under the leadership of Erdoğan and his AKP party. Turkey has distanced itself from membership in the European Union, a former goal of the nation, in order to pursue better ties with terror-supporting nations like Syria and Iran. Turkey's efforts with Syria backfired after a massive crackdown on pro-democracy demonstrators, leading Erdoğan to condemn Syrian President Bashar al-Assad and predict his downfall.

Turkey's relations with Iran have also been on display, with Erdoğan openly repeating his intelligence cooperation with Iran in counterterrorism affairs. In a CNN interview, he brushed off Western concerns over Iran's nuclear weapons program, choosing to take Iran at its word.

"And Iran says that its only purpose is to generate affordable energy through nuclear power," Erdoğan said. "We don't want to act on presumptions. And no sanctions based on presumptions are acceptable by Turkey."

Such behavior and more indicates that "Turkey may be, along with Iran, the most dangerous state of the region," Middle East Forum president Daniel Pipes wrote Tuesday. In addition to Turkey's troubling foreign policy, Pipes also notes its internal problems, including political challenges posed by the pro-Kurdish Peace and Democracy Party (BDP), more aggressive terrorist attacks by the Kurdistan Workers' Party (PKK) and a possible economic collapse.

future, by Turkey threats. The Mutual agreeents of Israel, Cypress, & Greece will result

from the recent finds. Any terror attacks or subotage by Turkey would put Trkey's

Turkey has become a state sponsor of terrorism.

Turkish threats to escort vessels running the Israeli Gaza blockade constitute a war threat little different from the threats issued by Abdel Gamel Nasser in 1967, which would now, as then, justify a preemptive strike! If, as Turkey asserts, the Palmer Commission Report is wrong on naval blockades, nothing would then prevent Israel or any other nation from sending seaborne military support to the Kurdish BDP and PKK. The pro-Hamas Turkish "IHH" terrorist organization armed itself with metal staves and knives in anticipation of violence, yet Erdogan did nothing to screen passengers or weapons from the Mavi Marmara. Before demanding an apology from Israel for the deaths of nine terrorists, wouldn't it be appropriate for Turkey to apologize for allowing them and their weapons on board the vessel? It would seem that Turkey also owes apologies for the 1915 Armenian Genocide, the massacre of Kurdish separatists seeking self-determination, and the invasion and occupation of northern Cyprus, before demanding an apology from Israel, which acted according to international maritime law! Turkish hypocrisy does not pass the "stench test" and Erdogan must cleanse himself of it before he fouls the entire atmosphere of the Middle-East!