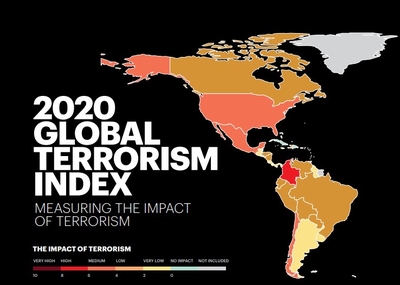 Islamist extremism remains the most threatening form of terrorism worldwide by far, according to the latest Global Terrorism Index (GTI) 2020 report. Among the top 20 states most vulnerable to terrorism, 19 of them are mainly targeted by armed Islamist actors.

The four deadliest terrorist organizations identified in the study are the Taliban, Boko Haram, the Islamic State, and the al-Qaida affiliated al-Shabaab group based in Somalia. These Islamist organizations were behind over half of the total deaths recorded in 2019.

Some media outlets, however, chose to report on the GTI study by highlighting a concerning trend of rising far-right terrorist activity in the West instead. But a closer look at the GTI data itself offers a more accurate story.

Though far-right terrorist incidents are increasing, Islamist terrorist attacks in the West on average are considerably more lethal. Since 2002, right-wing extremist attacks have inflicted 0.86 deaths per incident, whereas Islamist groups kill 4.49 people per attack. The study's findings led the authors to state that "the deadliest form of terrorism in the West over the past two decades has been religious terrorism, which has almost exclusively taken the form of radical Islamist terrorism."

The Sydney, Australia-based Institute for Economics & Peace compiles the annual GTI report based on data from the Global Terrorism Database (GTD) and other sources. The GTD includes more than 170,000 terrorist incidents from 1970-2019.

The GTI report finds that among the 13,826 terrorism-related fatalities last year, far-right groups – including white supremacists and neo-Nazis –killed 89 people. A lone gunman attack on two mosques in New Zealand caused 51 of those deaths.

In addition, unaffiliated people are the primary perpetrators of right-wing extremist attacks – not terrorist groups which tend to be deadlier and more organized. Almost 60 percent of right-wing terrorist attacks since 1970 were perpetrated by people unaffiliated with any organization or network, whereas more than 90 percent of Islamist attacks involve assailants who are affiliated or part of formal terrorist organizations. This discrepancy poses important implications for assessing lethality and the overall threat from terrorist actors driven by diverse ideologies.

Terrorist attacks in the West are also a tiny fraction (0.51 percent) of total attacks recorded worldwide. The GTI report finds that 96 percent of terrorist-related fatalities last year took place in states experiencing armed conflicts, which primarily take place outside of the West.

Islamist-led violent campaigns are the primary driver of global terrorist attacks, which threaten predominately Muslim societies across the world from Asia – in countries such as Afghanistan, Philippines, and India – to Africa – in places like Nigeria, Somalia, Egypt, and Mozambique.

These findings reinforce conclusions from another recent study which show that religious terrorist organizations, primarily Islamist groups, are far more likely than other ideologically-motivated groups to launch and fight a sustained insurgency.

While religious groups are unlikely to achieve their ultimate objectives, like defeating states in armed conflicts or establishing a global caliphate, a large body of scholarly research shows that Islamist organizations are behind far more terrorist attacks and casualties worldwide than other types of armed groups.

On a positive note, total deaths from terrorism have declined in recent years in most regions. This welcome news can be largely attributed to successful counterterrorism efforts against the Islamic State's core organization.

But jihadist activity is spreading beyond its traditional center of gravity and remains the greatest terrorist threat globally. Since 2013, the Islamic State's affiliates have carried more than 3,000 attacks in 48 countries outside its central base in Syria and Iraq.

Fatalities from terrorism in South Asia and sub-Saharan Africa now surpass terrorist-related deaths in the Middle East and North Africa.

Seven of the 10 states with the highest increase in attacks over the past year were in sub-Saharan Africa – countries facing rising instability mainly at the hands of jihadist organizations.

Burkina Faso, for example, experienced a 590 percent increase in terrorism-related fatalities over the past year as various al-Qaida and Islamic State affiliates expand their presence across West Africa's Sahel region.

It is important to note that by exploring terrorist incidents, the GTI report overlooks many foiled plots. Examining foiled or disrupted plots, however, improves our understanding of terrorist threats.

For example, previous Europol reports show that European separatists conduct more attacks than jihadists on the continent. But these assessments misrepresent the fact that the jihadist threat is transnational, not inherently localized like separatist movements, and are more likely to cause more fatalities.

Providing broader context is critical when comparing terrorist threats, both in the West and globally.

Despite the prevalence of terrorism from various sources, Islamist terrorism continues to be the gravest form of terrorism overall.