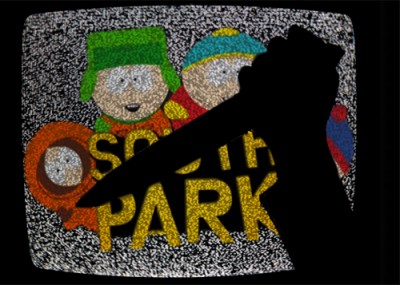 A convert to Islam who helped promote death threats against the producers of the animated television show "South Park" after it featured a character representing the prophet Mohammad will serve 11½ years in prison, a federal judge ordered Friday.

Jesse Morton pleaded guilty in February to conspiracy and two counts related to issuing threats in connection with actions after an April 2010 episode of the comedy. He asked the court for a sentence less than half of what he received, arguing he never tried to carry out the threats and since had moderated some of his extreme views to the degree that he hopes "one day help build bridges between the West and the Muslim World."

He apologized in court, the Associated Press reports, saying he "justified atrocities by Muslims simply because they were carried out by the weak against the powerful."

Regardless of Morton's current attitude, his actions in this case and through a radical website he helped launch inspired a host of others to plot terror attacks, prosecutors said. They will haunt the victims for the rest of their lives and stand to let threats silence public discourse.

U.S. District Judge Liam O'Grady seemed to agree with the prosecution argument that the threats will live on indefinitely for those targeted, and that a strong sentence is needed to stand against such brutal assaults on free speech.

"You were rubbing elbows with some of the most dangerous revolutionaries of the past few years," O'Grady said Friday, adding "there has to be religious tolerance in the world. There has to be freedom of speech."

Morton, 33, was a founder of the radical website Revolution Muslim, created in 2007 for posting material "supportive of violent jihad," court papers show. That's where the "South Park" threats were published, along with excerpts on bomb-making from al-Qaida's English-language Inspire magazine. The posting included a picture of slain Dutch filmmaker Theo van Gogh, who was killed after producing a short film considered offensive to Islam. Producers Matt Stone and Trey Parker faced a similar fate, the posting said, suggesting Revolution Muslim supporters "pay a visit" to them. It also included audio files of American-born al-Qaida cleric Anwar al-Awlaki justifying the killing of anyone who defamed the prophet.

The Council on American-Islamic Relations (CAIR) minimized the significance of the threats when they first were issued, dismissing Revolution Muslim as "an extreme fringe group that has absolutely no credibility within the Muslim community." National spokesman Ibrahim Hooper even speculated the group was "set up only to make Muslims look bad."

But Morton's plea makes it clear that the group enjoyed a vast reach.

Revolution Muslim posts inspired others to plot and wage violence. In a statement of facts, he acknowledges interacting with at least a half-dozen other radical Islamists, including those who plotted to attack sites in the United States, Britain and Denmark.

"Morton may sincerely regret his actions today, and we hope he does," Kromberg wrote. "Nevertheless, the solicitations for murder that Morton posted on an internet site patronized by terrorists and their sympathizers likely will never disappear."

Morton admitted to investigators that he never saw the "South Park" episode that prompted the threats. It featured a character – fully hidden in a bear suit – that was supposed to be the prophet Mohammad. Even the irreverent comedy team was reluctant to actually show an image of the prophet out of fear of a resulting violent backlash.

"Mohammad is the only person in the world that can't get ripped on," the character Cartman says in the episode.

When Seattle cartoonist Molly Norris responded with a proposed "Everybody Draw Mohammad Day," she too, faced threats. The three "will always be marked as enemies of Islam and targets for those who seek to gain entrance to heaven by killing one - - and this is true regardless of Morton's regrets," Kromberg wrote.

Morton's ironic response – issuing threats to those who suggested Islam might be intolerant or "that some Muslims are too quick to resort to violence" – required a strong statement from the court to protect those threatened and those who might express opinions in the future.

"Morton did not call for 'An eye for an eye.' He did not incite Muslims to retaliate against a television show he found insulting by making another television show, nor did he incite Muslims to retaliate against a cartoon he found insulting by making another cartoon. Instead, he incited them to slit throats for a television show and for a cartoon - a throat for every drawing, book, speech, or movie that he deemed to be 'insulting.' Offend us, Morton said to his fellow Americans, and you will end up in hiding like Salman Rushdie, Hirsi Ali and Geert Wilders, attacked like Kurt Westergaard, or dead like Theo Van Gogh. The law must resist this violent intimidation at all costs."

The entire case represents a threat on free speech, the government argued:

"The natural consequence of Morton's actions is for people throughout the country to fear speaking out – even in jest – lest they also be labeled as enemies who deserve to be killed. The role of Muslims in the United States, the relationship between the United States and the Muslim world, and the existence of links between Islam and terrorism are issues of major public importance. Yet, anyone choosing to address them publicly must carefully weigh the risk of being marked for death by the likes of Morton for saying or writing something perceived as insulting while doing so. Left unchecked, that risk will hamper public policy decision making by dampening public discourse over some of the most consequential issues of our age.

While the drafters of the Sentencing Guidelines may have contemplated the kinds of harm that Morton caused to MS, TP, and MN, we doubt that they ever contemplated a harm of the magnitude that Morton caused our society as a whole by making people shrink from expressing their opinions - - or even telling a joke - - lest they be accused of being an enemy of Islam for whom beheading is the only appropriate punishment. Regardless of the need to punish him for his other offenses, his sentence must deter others from engaging in similar conduct that would chill free expression in our society.