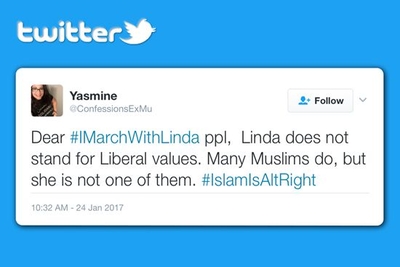 By all accounts, last Saturday's Women's March protests generated huge crowds in Washington, D.C. and in similar rallies throughout the country.

It also has triggered a heated debate, playing out largely on social media, about one of the march's principal organizers, radical Islamist activist Linda Sarsour. But Sarsour and her defenders are casting this solely as an attack from right-wing elements, ignoring inconvenient criticism from liberal, secular voices who say she is misrepresenting the American Muslim community and pushing a conservative religious message.

An article in the Huffington Post dismissed any criticism out of hand, choosing not to look at Sarsour's own illiberal statements over the years. As we have reported, she has said, "Nothing is creepier than Zionism." She refused to stand with the victims of the 2015 Charlie Hebdo attack – and even condemned them as bigots and racists – because she claimed they vilified Islam by publishing cartoons. And she heatedly rejected any cooperation or dialogue with anyone, Muslim or non-Muslim alike, who supports Israel's existence. 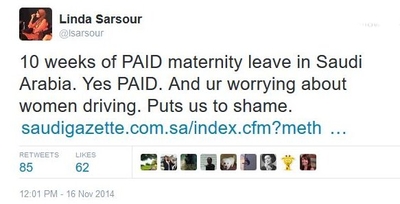 Other critical reports this week focused on her comments minimizing Saudi Arabia's treatment of women and alleged family ties to Hamas.

She has been less outspoken about Saudi human rights abuses, including against Raif Badawi, an Amnesty International prisoner of conscience sentenced to 10-years in prison and 1,000 lashes. His crime? "Insulting Islam through electronic channels" by creating a website called "Free Saudi Liberals" and writing critically about religion and Saudi institutions.

In October, Sarsour acknowledged that "Saudi has bigger problems, yes; I'm not naïve." She just hasn't chosen to call attention to them.

The Huffington Post story never challenged the accuracy of those reports or asked Sarsour to address them. Instead, the story quoted Sarsour blaming "the alt-right" for "putting out falsehood[s] and discrediting a proven effective activist and leader."

"In the days since the Washington protest ― where Sarsour delivered a powerful five-minute speech to a crowd of half a million people ― The Daily Caller, FrontPageMag, The American Thinker and The Gateway Pundit, plus a slew of anti-Muslim hate sites, published disparaging articles about Sarsour," the story said.

Likewise, Elle magazine glossed over Sarsour's history. A MoveOn petition claims that, "Alt-right fanatics and Trump supporters are using lies and anti-Muslim conspiracy theories" to tarnish the weekend march. It does not specify any claim against Sarsour which it believes is false, but it has secured more than 20,000 signatures.

In response, people are voicing their solidarity on Twitter with the hashtag, "#IMarchWithLinda." 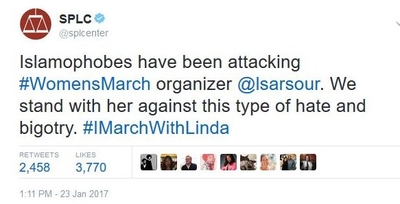 The Southern Poverty Law Center (SPLC), which recently labeled a Muslim reformist and an ex-Muslim as "anti-Muslim Extremists," used the hashtag to rise to Sarsour's defense on Twitter. It, too, omitted any reference to liberal criticism.

Sarsour has drawn fire from liberals throughout the march's planning and aftermath. A British blogger on Wednesday described her as "an apologist for oppressive Islamist fundamentalism and an identity politics poser."

Many march supporters were angered by a decision by Sarsour – a prominent Bernie Sanders supporter during the primaries – and other march organizers, to omit any reference to Democratic presidential nominee Hillary Clinton in a list of women to be honored.

"Why let her be the story and erase millions of women who will be impacted?" Sarsour said. "This is about optics." 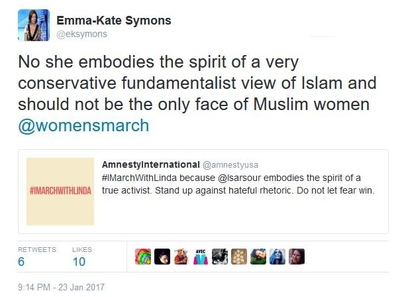 In a scathing op-ed posted Friday by the New York Times, journalist Emma-Kate Symons blasted Sarsour for barring pro-life women for being anti-choice while at the same time advocating "an illiberal ideology that many Muslim women say is all about men controlling their bodies..."

"And why is a woman seen wearing a heavy veil pulled up tight to cover her neck — not even a headscarf — emerging as the symbol of the rally?" Symons asked. "Yes, Trump is singling out Muslims but must we play his reductionist game? Muslim women are a diverse group. Such a vision purposefully excludes non-veiled Muslim women, who make up the majority of American Muslims, and all feminists who champion a woman's right to be free from the degrading virgin-whore dichotomy that has afflicted them since most of the world's great religions blamed women for tempting men."

One of the people who voiced support for Sarsour has done just that. Yasir Qadhi is an ultra-conservative cleric who believes Muslim women should not work, except as school teachers or as physicians serving other Muslim women. In 2012, Yasir Qadhi explained that Muslim women need protection from "the wolves that are men."

Sarsour retweeted Qadhi's support. He is the dean of academic affairs for the AlMaghrib Institute, which touts itself as the "premier Islamic education in the West with the largest on-site student body."

It is much easier for Sarsour and her defenders to lash out at "a slew of anti-Muslim hate sites," but how many "#IMarchWithLinda" supporters agree with Qadhi's Saudi-like view that women should shun careers and fulfill their roles as wives and mothers?

"This is what you are most capable of doing," Qadhi said. "...Stay at your house. Your food and drink will come to you. What more do you want? Your husband will provide for you all that you need ... you take care of the small, little things of the house. You please your husband. And in return your husband will give you the far more difficult things to do of earning money and doing this and that."

In another sermon, Qadhi lamented society's regression and reminisced about the time condemning homosexuals was acceptable. "Today, he said in the video uploaded to YouTube in 2009, "it is impossible, forget a Muslim, even a Christian or a Jew can not stand up in public in front of a non-Muslim audience and speak against homosexuality, he is a homophobe, he is an evil person, how dare he preach his hatred against this group of people?"

These changing norms pose a threat to Muslims, he said. "How are you gonna defend, how are you gonna say hijab is good or bad when they themselves don't have a steady command of what is good and bad? When good and evil evolves within their own society and culture. You can't. You simply can not play the rule according to their games. You can not do it." 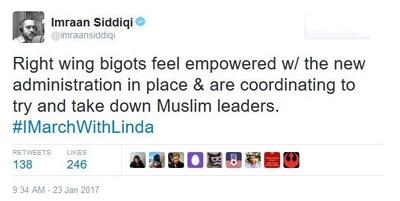 Another supporter, Imraan Siddiqi, runs the Arizona office for the Council on American-Islamic Relations (CAIR), an organization rooted in a Muslim Brotherhood-created Hamas support network in America. Siddiqi recently advocated commuting prison sentences for five men convicted of illegally routing millions of dollars to Hamas. Their case was "a political lynching of charity workers," he claimed.

"Right wing bigots" are after Sarsour in an attempt to "take down Muslim leaders," he wrote.

Sarsour solicited much of the support.

"I need extra prayers sisters and brothers. The opposition cannot fathom to see a Palestinian Muslim American woman that resonates with the masses," she wrote Monday on Facebook. "Someone whose track record is clear and has always stood up for the most marginalized.

Yasmine Mohammed, an ex-Muslim blogger, said it was a mistake for liberals to choose a conservative as "your mascot." 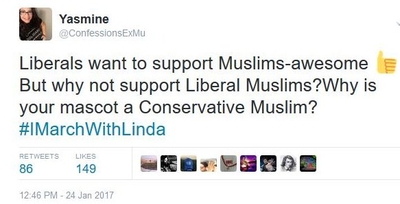 In an email, Mohammed said Sarsour's conservative Islamist ideas are incompatible with someone leading a liberal protest movement.

"They are supporting her because of her 'identity' as a Muslim, yet they are not paying attention to the fact that her 'ideas' are highly illiberal. How it never occurred to them that judging a person by their identity is the epitome of racism and bigotry is beyond me. They are literally valuing color of skin over content of character."

As a result, liberals in the Muslim world feel isolated or abandoned by their Western counterparts. If more liberal Muslims were elevated to Sarsour's stature, it might empower them to take on Islamist groups which subjugate women and minorities.

But that's a challenge, Mohammed said, because "In order for a Muslim to 'look' authentic, [the] media goes looking for a Muslim with quaint and exotic garb...they invite a woman in a hijab or a man with a long beard. The problem with that is - those people are very likely conservative Muslims. A Liberal Muslim looks like you or me; that's not fun. Again, it's 'identity' over 'ideas'.

Sarsour's liberal defenders are adopting a strategy Islamists rely upon: cast any disagreement or criticism as "Islamophobic," to deflect any genuine debate or examination of her record. Here, anyone who disagrees with Sarsour must be "alt-right." As the few examples of liberal criticism shows, this simply does not fit with reality. If the voices of Muslim reformers, ex-Muslims and western feminists aren't enough, it's not clear anything will make liberals recognize the illiberal nature of some allies.