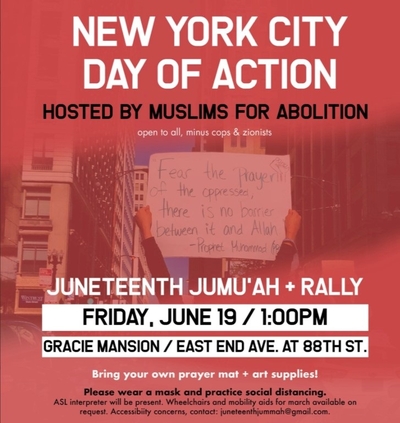 It was an event to celebrate freedom and protest ongoing bigotry and discrimination.

But the group Muslims4Abolition, which wants "... to be part of the movement to abolish bail, abolish jails, abolish the police, abolish prisons," openly engaged in bigotry and discrimination in promoting its Juneteenth rally last Friday in New York. The event, an advertisement made clear, was "open to all, minus cops & Zionists."

Juneteenth marks a day in American history that celebrates the freedom of the last slaves, more than two years after Abraham Lincoln signed the Emancipation Proclamation.

It should surprise no one that an event which specifically excludes Zionists – those who believe in a homeland for the Jewish people – would draw support from Linda Sarsour and her organization MPower Change. 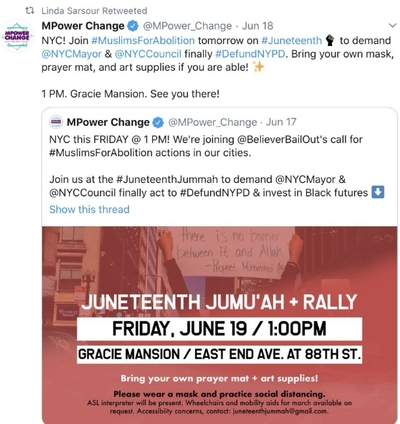 Sarsour has a history of espousing her own bigotry and excluding Zionists from progressive platforms. In a 2017 interview with The Nation, she claimed people could not be both feminist and Zionist.

"It just doesn't make any sense for someone to say, 'Is there room for people who support the state of Israel and do not criticize it in the movement?' Sarsour asked. "There can't be in feminism. You either stand up for the rights of all women, including Palestinians, or none. There's just no way around it."

She has repeatedly spread a blood libel linking U.S. law enforcement personnel training in Israel to the shooting of unarmed black people in America.

"If you believe in the idea of ending police brutality and the misconduct of law enforcement officers across the country," she told the Islamic Society of North America's 2018 convention, "then you do not support an organization that takes police officers from America, funds their trips, takes them to Israel so they can be trained by the Israeli police and military, and then they come back here and do what? Stop and frisk, killing unarmed black people across the country."

Sarsour has questioned Zionists who stand against white supremacy because Sarsour believes that Israel was also built on supremacy—Jewish supremacy.

In 2016, she told an American Muslims for Palestine (AMP) event that she only wants friendships and camaraderie with those who unequivocally support the boycott, divestment, and sanctions (BDS) movement. The BDS movement singles out Israel for political and economic isolation while ignoring other countries with far worse human rights records. The founder of the BDS movement has said no Palestinian would ever accept Israel's existence as a Jewish state.

Many have taken to social media to condemn Sarsour for promoting an event that, polls show, excludes nearly all Jews. More than 90 percent of the world's Jews consider themselves Zionists to varying degrees in that they believe Israel has a right to and should exist as a Jewish state.

"*Open to all* (minus ~90% of Jewish people who are Zionists)," tweeted Israeli activist Hen Mazzig. "We won't make this about us if you won't. Stop it. This fight is too important for antisemites to abuse this way."

"@lsarsour can't even hold a rally against racism without expressing her own bigotry," the group Democratic Majority for Israel wrote. "Her organization banned 95% of American Jews from an event they hosted."

It is historically tone deaf and somewhat ironic to mark an event celebrating emancipation and protesting discrimination by engaging in it. But that's what the group Muslims4Abolition did by excluding Jews who support Israel and cops.

"No Zionists" – essentially banning Jews – invokes other dark periods in American history in which other minorities endured discrimination.

The Southwest experienced segregation for Mexican Americans who went to school. Mexicans and Mexican Americans could only sit in the balcony at movie theaters and were only allowed to enter swimming pools on certain days when the water was considered dirty.

The Irish and Italians also faced discrimination in the United States.

Linda Sarsour is an anti-Semite who cannot help but attach herself to anti-Semitic bigotry. "What her organization did this week by specifically excluding those who support Israel's right to exist needs to be called out by everyone, especially by those who refuse to support it," wrote Wendy Kalman in The Times of Israel. "Because this is wrong. Just wrong."

It's not realistic to expect her to change. But she still enjoys a profile prominent enough to win a book contract from a major publisher. Her organization's embrace of a discriminatory demonstration is just more evidence that she takes advantage of her platform to spread hatred.