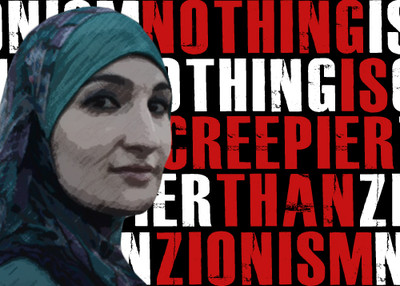 But on Tuesday, Sarsour was uncharacteristically apologetic.

"Over the weekend, I made comments about Israel that require context to understand. I was specifically referring to the racist argument at the heart of the nation-state law recently passed by the Israeli government – not the Jewish people," she wrote. "I apologize for the confusion."

In a series of Twitter posts, Sarsour said criticism of her comments Friday during a session before the virulently anti-Israel group American Muslims for Palestine's (AMP) annual convention "is a further attempt to paint the left in USA & UK as antisemitic."

No, Linda. It wasn't an attempt to cast the Left as anti-Semitic. Just you.

In fact, she did not mention Israel's nation-state law in her remarks. But she did speak in a session titled, "Palestine, Islamophobia, Racism and Zionism: What is the Connection?" It is Zionism she found illegitimate, not a controversial new law. And she repeated her previous argument that liberal Zionists and their supporters can never be allies.

"You tell me, 'Oh, I'm with you. You can't push me out of the movement because I'm also against white supremacy,'" Sarsour said. "Ask them this: How can you be against white supremacy in the United States of America, and the idea of living in a supremacist state based on race and class, but then support a state like Israel that is built on supremacy? That is built on the idea that Jews are supreme to everybody else. How do you, then, not support the caging of children on the U.S.-Mexican border, but then you support the detainment and detention of Palestinian children in Palestine? How does that work, sisters and brothers?"

That's consistent with what she told the AMP convention in 2016, well before the nation-state law was proposed.

"We have limits to the type of friendships that we're looking for right now," Sarsour said, "and I want to be friends with those whom I know have been steadfast, courageous, have been standing up and protecting their own communities, those who have taken the risk to stand up and say – we are with the Palestinian people, we unequivocally support BDS [boycott, divestment and sanctioning Israel] when it comes to Palestinian human rights and have been attacked viciously by the very people who are telling you that they're about to stand on the front line of the Muslim registry program. No thank you, sisters and brothers."

Still, Sarsour claimed Tuesday that she is "a consistent advocate for human rights for ALL oppressed people all over the world. My track record is CLEAR." [Emphasis original]

She is right about that, just not in the way she thinks.

For as long as she has been in the public eye, Sarsour has opposed Zionism – the idea of a country for Jews in their ancestral homeland that can serve as both a free society based on law, and as a refuge from oppression that Jews have faced throughout history.

There's no confusion in Sarsour's 2012 statement, "There's nothing creepier than Zionism." The statement, for all the controversy it generated, remains on her Twitter feed today.

Her record is clear when refers to Israel as an oppressor and tells Muslims to stop "actually trying to humanize the oppressor."

There's no context required to understand her anti-Semitic beliefs, including her claim that Jews contribute to police shootings of unarmed black people because of an Anti-Defamation League program that takes police officials for a week of seminars in Israel, "so they can be trained by the Israeli police and military, and then they come back here and do what? Stop and frisk, killing unarmed black people across the country."

She made similar comments in a 2015 speech at the 20th anniversary of avowed anti-Semite and Nation of Islam leader Louis Farrakhan's "Million Man March."

"Making mendacious, dehumanizing, demonizing, or stereotypical allegations about Jews," is among the examples of anti-Semitism detailed by the International Holocaust Remembrance Alliance. So is "Denying the Jewish people their right to self-determination, e.g., by claiming that the existence of a State of Israel is a racist endeavor."

Sarsour checks both boxes. She served until recently on the governing board for the national Women's March, which was dogged by repeated anti-Semitic incidents, including a stubborn refusal by Sarsour and her colleagues to renounce Farrakhan.

She reportedly has used Nation of Islam officials for security, both personally and for the March.

Despite this record, Sarsour is an official surrogate in U.S. Sen. Bernie Sanders' presidential campaign. And somehow, her hateful rhetoric did not stop Simon & Schuster from publishing Sarsour's book, which is due out in March and ironically described as "a memoir of love and resistance."

It's not clear what prompted Sarsour to walk back her hateful comments from the AMP conference. But both the Sanders campaign and Simon & Schuster might be glad to see it.