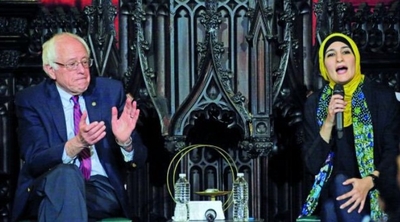 U.S. Sen. Bernie Sanders' hypocrisy when it comes to anti-Semitism on the Left, and his presidential campaign's support of anti-Semites, could haunt Democrats in 2020, former New York State Assemblyman Dov Hikind told the Investigative Project on Terrorism (IPT).

Sanders relies on supporters of the anti-Semitic Boycott Divestment and Sanctions (BDS) movement to run his campaign and to speak on his behalf. He has suggested diverting military aid from Israel to support Palestinians in Gaza.

Sanders hides behind his Judaism to deflect criticism, Hikind said, but he legitimizes anti-Semitism by embracing people who support hatred of Jews. These include campaign surrogate Linda Sarsour and endorsers like U.S. Reps. Rashida Tlaib and Ilhan Omar.

"The tragedy of Bernie Sanders is that he focuses on anti-Semitism by those on the alt-Right and he ignores that of people on the Left just because they are fellow Democrats," Hikind said. "How in God's name does Sanders have the likes of Linda Sarsour not just as someone who supports him, but as a surrogate?"

Sarsour recently equated Zionism with white supremacism, saying that Israel "is built on the idea that Jews are supreme to everybody else."

She has refused to disavow her support for Louis Farrakhan and has defended Hamas against critics.

Hikind is not the only Democrat to denounce Sanders' alliance with Sarsour.

"As Democrats committed to progressive values, we wish we could be praising Senator Bernie Sanders today for standing up to antisemitism," Democratic Majority for Israel President Mark Mellman said in a statement earlier this month. "Instead, we are deeply saddened and completely appalled to see Senator Sanders standing with antisemitism by remaining silent and retaining Linda Sarsour as an 'official surrogate' of his campaign after she made yet another antisemitic statement."

Sanders doesn't utter anti-Semitic language, but his policies would benefit people sworn to Israel's destruction. He advocated providing aid to Gaza in October without concern that money could end up with Hamas.

"My solution is to say to Israel: You get $3.8 billion [in U.S. aid] every year. If you want military aid, you're going to have to fundamentally change your relationship to the people of Gaza. In fact, I think it is fair to say that some of that should go right now into humanitarian aid," Sanders said.

Poverty in Gaza is rampant, he said in a video shown during an American Jewish Committee (AJC) forum, with 53 percent unemployment. But he assigned no responsibility to Hamas for the situation and claims that ending Israel's "occupation" of the Palestinian territories will be a fix. Israel withdrew its troops and settlements from Gaza in 2005, but instead of furthering peace, Israel got terror rockets and threats from Hamas, Palestinian Islamic Jihad (PIJ) and other Palestinian terror factions.

Sanders also calls for a two-state solution to the conflict, but blames only Prime Minister Benjamin Netanyahu for not making it happen. He has little to say about the fact that Hamas remains committed to Israel's destruction, and even Fatah officials, who are considered more moderate, vow not to "relinquish a grain of soil from the land of historical Palestine from the [Mediterranean] Sea to the [Jordan] River."

If he truly is committed to a peaceful, two-state solution, Sanders might want to chat with Sarsour, his campaign surrogate. She supports a "one-state solution" that would end Israel's existence. Hamas has chosen to use the money it has received from donors and foreign aid to buy arms and build tunnels to fight Israel instead of working to improve life in Gaza.

While his campaign is home to BDS supporters, Sanders claims he disagrees with them. "I personally do not support [BDS] there are a lot of other countries around the world you might want to boycott including Saudi Arabia, a brutal dictatorship," Sanders told an Iowa TV station. "But I think if you choose to engage in a boycott personally, you have that right. Well, I don't. I don't wanna punish you.

"My view is that the United States government shouldn't be telling you what boycotts you can or cannot participate in."

"The hypocrisy of Bernie Sanders. He is the candidate running for president of the United States. He says he's against BDS, but all these key players that he has welcomed the support from [Alexandria Ocasio-Cortez] to [Rashida] Tlaib, [Ilhan] Omar, Linda Sarsour. All of them are leaders in this anti-Semitic movement," Hikind said.

Sanders' campaign employs several people who were involved in anti-Semitic scandals at the Center for American Progress (CAP) and Media Matters.

These include Sanders campaign foreign policy adviser Matt Duss, who gained notoriety due to a 2011 anti-Semitism incident at CAP. Duss compared Israel's defensive blockade of Gaza to segregation in the American south, calling it "a moral abomination."

"It's sad that it should require the deaths of non-Palestinians to finally shake the international community from apathy and inaction," Duss wrote.

CAP blogger Zaid Jilani implied that supporters of Israel have a divided loyalty and put the interests of the Jewish state before America's.

"Israel Firsters fighting each other over whose position on the Middle East conflict is more unreasonable," and, "... Obama is still beloved by Israel-firsters and getting lots of their $$," CAP blogger Zaid Jilani wrote in 2011.

"Israel-firsters" is an anti-Semitic smear casting Jews as disloyal to America.

Sanders Campaign Manager Faiz Shakir, who served as a CAP vice president, conceded in a leaked 2011 e-mail that his subordinates used "terrible, anti-Semitic language," but he did not offer a forceful public condemnation.

Shakir defended then-U.S. Rep. Keith Ellison in late 2016, when Ellison, then a Minnesota congressman, sought to become chairman of the Democratic National Committee. The IPT obtained a 2010 recording in which Ellison said that Israel had too much power of American foreign policy.

"No, the Keith Ellison Tape Isn't Anti-Israel — and Shouldn't Torpedo His Run [for DNC Chairman] http://jd.fo/ocFa ," Shakir wrote on Twitter. Ellison lost his bid to run the DNC.

Duss and Shakir aren't the only Sanders staffers tainted by anti-Semitism accusations.

Deputy Campaign Manager Ari Rabin-Havt, who previously worked as executive vice president of the liberal group Media Matters, refused to condemn staff writer M.J. Rosenberg for using the term "Israel Firster" in 2011. "I'm not going to get in a debate about tweets," Rabin-Havt told The Washington Free Beacon.

"Welcome aboard @RashidaTlaib we are honored to have you fighting along side @BernieSanders and our crew! #notmeus," Rocha wrote in October.

In sum, the Sanders campaign has surrogates who would like to see Israel eliminated, and staffers who accuse supporters of the state of having dual loyalties.

"Bernie Sanders is a pure hypocrite, unadulterated hypocrite, that talks about values, that talks about how he supports Israel and so on, and the people around him are the most malicious vile anti-Semites," Hikind said. "I don't know how he's getting away with it. I'm a Democrat, and as a fellow Democrat I tend to ask tough questions. How ... is he getting away with it?

"He's a leading candidate; he's not a fringe candidate."

Hikind warns many Democrats are angry with what they see as indifference to anti-Semitism from the Left and intend to punish their party for supporting anti-Semites.

Some analysts saw last week's electoral wipeout of the U.K. Labour Party as a warning.

"[Labour Leader Jeremy] Corbyn rendered his party toxic. His penchant for standing in solidarity with terrorists and anti-Semites opened a seal out of which a cascade of anti-Jewish sentiments poured, engulfing his party in scandal," Noah Rothman wrote in Commentary magazine. "His brand of radical socialism was insufferably hidebound. His expressions of sympathy for history's greatest criminals were thoughtlessly dogmatic."

Labour candidates suffered their worst defeat in almost 100 years as a result, and the Conservative Party won a 78-seat majority.

The same sort of defeat could happen in the United States if Sanders emerges as the nominee, Hikind said.