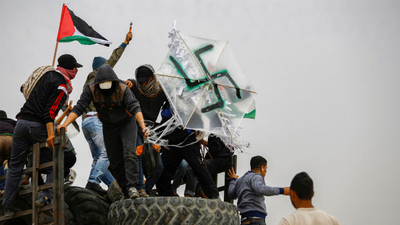 Since March 2018, Hamas has held near-weekly violent protests on Israel's border with the Gaza Strip. It sent busloads of Palestinian men to the Israeli border, dispatched operatives to launch incendiary devices, and encouraged rioters to infiltrate Israel and carry out attacks. But for the past three Fridays, the Israel-Gaza border has been unusually calm.

Reports indicate those protests will resume this week. But the question remains, why did Hamas decide to halt violent demonstrations this past month?

Before exploring some potential explanations, it's worth noting that it is now an open fact that Hamas plans these violent protests, controls their tempo, and decides when they stop. When weekly demonstrations first broke out, outside observers were duped into believing the protests were peaceful, spontaneous expressions of popular Palestinian discontent. More than a year later, we can fully put that narrative to rest. A Hamas-run committee, the High National Commission for the March of Return and Breaking the Siege, recently met to discuss whether protests should be toned down in light of the latest escalation of violence between Israel and mainly Palestinian Islamic Jihad terrorists.

Deliberations included potentially "rolling back the marches to once a month or during national occasions," a Hamas committee member told the Hizballah-affiliated al-Akhbar daily on Nov. 22, the Times of Israel reported. No decision has been reached.

Similar deliberations about the Gaza border protests took place earlier this year. After a temporary lull in protests, a Hamas source, cited in al-Akhbar, threatened to re-start the terrorist group's arson terrorism campaign, sending incendiary kites and balloons toward Israeli communities. Another senior Hamas official said the "return marches" would start increasing in severity and that "non-violent" means, including arson terror campaigns, would be reignited if Israel failed to comply with Hamas demands.

These riots were never spontaneous outbursts of grievances by ordinary people. Mass violence on the border is a largely top-down, organized terrorist initiative to provoke Israel.

The evidence is clear from looking at Palestinian fatality ratios resulting from border confrontations. The vast majority of Palestinians killed in the weekly violent protests on the Israel-Gaza border are people affiliated with Hamas and other terrorist groups.

From March 2018 through mid-2019, approximately 187 Palestinians were killed at the Israel-Gaza border – including 150 (80 percent) members or affiliates of terrorist organizations. About half of those killed are either associated with Hamas or are full-blown members. Hamas military wing operatives represent almost a quarter of the total fatalities.

The border violence is intended to coerce Israel into adhering to Hamas' demands, including open border crossings and financial transfers. The latest cessation of protests may signal that Hamas is willing to give Egyptian and Qatari-mediated negotiations with Israel a chance. On Monday, a senior-level Hamas delegation reportedly arrived in Cairo to discuss reducing hostilities with Israel, among other concerns. These Hamas overtures suggest that more pragmatic elements within the organization are looking to reach a longer-term truce with its arch-enemy Israel, so that the organization can focus on re-building its terrorist infrastructure and imposing control over Gaza. Hamas, at its core, remains committed to the long-run destruction of the Jewish state.

Beyond negotiating tactics, there is another reason Hamas may seek to reduce protests on the border: mitigating large gatherings of demonstrators that could backfire. Hamas largely sat on the sidelines during the latest escalation of violence between Israel and PIJ to avoid a confrontation with Israel. This decision likely eroded its image as the main challenge to Israel and exposed Hamas' difficulty in reigning in on rival Palestinian terrorist activities in the Hamas-run enclave. Beyond challenges from within the Palestinian national movement, Hamas faces growing dissatisfaction of its rule among Gaza's residents. The terror group is likely focusing on ways to deter or prevent internal protests that Hamas feels compelled to repress using brutal means.

Last March, Hamas operatives reportedly beat protesters with clubs and used other violence – including live fire – to disrupt the protests, along with conducting arbitrary arrests of dissidents, human rights activists, and journalists.

Demonstrations erupted in multiple areas throughout Gaza to protest the standard of living and poor economic conditions under Hamas rule. Since taking control of Gaza in 2007, Hamas has consistently diverted international aid and financial transfers to bolster its terrorist capabilities, at the expense of societal concerns. That has contributed greatly to the electricity and water shortages Palestinians there face.

A two-year investigation by Human Rights Watch (HRW) released last year found that Hamas and the Palestinian Authority (PA) use systematic torture and repression to stifle any dissent against their rule. Hamas chooses when to fuel or restrain violent riot against Israel, and never fails to ruthlessly quell any protest against itself.

Originally, weekly border protests were meant as a diversion, as Hamas' leadership admitted, to distract Gaza's constituents from internal economic and societal woes. But Hamas' latest call for calm at the border is not its way of extending an olive branch to Israel. The group has calculated that it is best to focus on crushing internal dissent, reigning in rival groups, and trying to get more concessions from Israel.