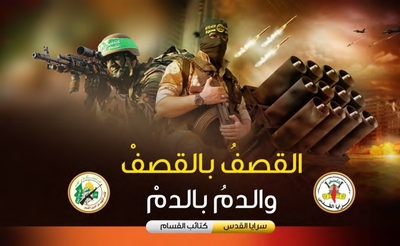 Hamas is attempting to create "new rules of engagement" in its war against Israel, as the terrorist organization recognizes that Israel's military will likely avoid direct responses against terrorist cells launching incendiary kites and balloons into Israel territory. This tactical and strategic shift is outlined in a new Meir Amit Intelligence and Terrorism Information Center report.

This Hamas-provoked tit-for-tat resembles similar sequences of events that took place two weeks ago in a violent escalation between the Palestinian Islamic Jihad (PIJ) and Israel.

Israel has increasingly relied on drones in an attempt to take down incendiary kites and balloons. Yet many of these devices continue to land on Israeli territory, sparking destructive fires that burn thousands of acres of crops and natural forest area. Containing the fires is a major strain on Israel's resources and significantly disrupts civilians' lives. So far, Israel relies on firing warning shots at Palestinians launching incendiary devices.

Hamas and PIJ spokesmen have referred to the terrorist rocket fire as a "new equation" with Israel and "an attack in return for an attack." The terror groups' military wings released joint messages - in Arabic and Hebrew - stressing this approach. The main Palestinian terrorist groups present themselves as a "resistance" to Israeli "aggression," but are the ones provoking these latest rounds of fighting by flying incendiary devices into Israel in the first place.

Hamas began encouraging and planning this new method of arson terrorism since the onset of violent border riots on the Gaza border at the end of March.

The vast majority of Palestinian fatalities during violent demonstrations on the Israel-Gaza border were members or affiliates of terrorist organizations – primarily Hamas.

Of the 112 reported deaths from March 30 to May 14, 93 people (83 percent) belonged to or were associated with terrorist groups.

The findings, supported by official statements from Hamas leaders, prove that Hamas was the driving force behind the deadly protests.Hamas also orchestrated several attacks at the border and encouraged Palestinians to infiltrate into Israel.

Any attempts to portray the riots as "peaceful protests" defies the evidence and Hamas's own leadership.