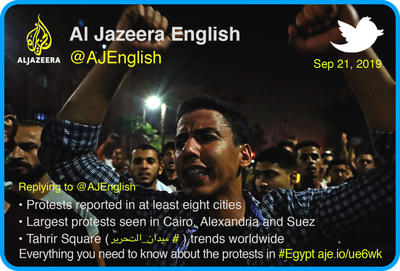 When some relatively minor protests against Egyptian President Abdel Fattah Al-Sisi broke out last month, many Islamists hoped it was the start of another revolution.

Massive street demonstrations in 2011 forced longtime President Hosni Mubarak to resign. He was replaced by a government dominated by the Muslim Brotherhood, which, in less than a year, managed to alienate millions of Egyptians who again took to the streets demanding change. The Egyptian army, then led by Al-Sisi, forced the Brotherhood out. He was elected president shortly thereafter.

Qatar-based Al Jazeera television was among the biggest cheerleaders hoping the latest protests were the start of the next big thing in Egypt. The network got caught using videos that looked like a massive street demonstration to bolster the claim that Sisi's government was vulnerable.

Al Jazeera admitted broadcasting the incorrect and misleading videos a day later. Some "turned out to be for football fans who gathered in Tahrir to celebrate a victory over Zimbabwe in CAF 2019 last June," an Al Jazeera anchor reported.

Before all of this, Muslim Brotherhood networks such as Mekameleen and El Sharq had called for a revolt against Sisi. A Sept. 20 program called "The last hours for Sisi" was hosted by prominent Muslim Brotherhood leader Hazem Zobaa.

Al Jazeera anchors and reporters hyped the Brotherhood campaign on their personal Twitter accounts. "The Egyptian people broke the barrier of fear, Al Sisi will not arrest millions if they are out and he will comply. Leave Sisi, the people want the Regime down," Palestinian-born Jordanian senior anchor Jammal Rayyan wrote on Twitter.

"Al Sisi will deliver a speech from Al Masa Hotel owned by the army," he wrote Sept. 25. "Will it be his farewell speech?"

No. Sisi was at the United Nations General Assembly meeting that day and there are no indications the government is about to fall. But other pro-Islamist voices offered similarly erroneous predictions.

"The ousted Al Sisi will not return home [from the UN meeting] for sure, that is a certainty," wrote Yemeni Nobel Laureate Tawakkol Kerman.

In the weeks leading up to this, the number of registered anonymous Twitter accounts surged, Saudi journalist Tarrad al-Asmari reported. Muslim Brotherhood committees orchestrated a campaign with the hashtag "#TahrirSquare," he wrote.

Al-Asmari uploaded 54,000 tweets, more than half of which had similar profiles and messages. This helped hashtags such as "Leave Sisi" and "You are finished Sisi" trend.

These made-up hashtags were celebrated by Al Jazeera Mubasher, a sister network that serves Islamist agendas. The channel continuously broadcasts videos critical of the Egyptian government.

Al-Asmari also uploaded a file containing Al Jazeera anchors inciting tweets against Sisi. Rayyan, for example, tweeted, "Bye Bye Sisi, it looks like Egyptians are on their way to oust Sisi in a week."

"Sisi is a tool for Zionists the enemies of Egypt," wrote Al Jazeera anchor Ahmed Mansour. "He destroyed Egypt, left Egyptians in poverty and debts. People of Egypt this is your chance to retake your country back from those who robbed it and left it impoverished."

Al Jazeera has long battled criticism it is biased toward the Muslim Brotherhood. Nearly two dozen staffers quit the network in 2013 after the Brotherhood's ouster from power, citing that very reason.

Despite Al Jazeera's apology, it continued broadcasting fabricated videos about the alleged revolution in Egypt through last Friday. One video showed a protester dressed in yellow appearing live on air in two different cities at the same time.

The Muslim Brotherhood's hopes of instigating a revolution started with a video call by a fugitive contractor named Mohamed Ali. He made unsubstantiated claims that the army didn't pay him what he was owed. Ali, who live in Spain, called for a revolution against Al Sisi. Al Jazeera and Brotherhood networks publicized his statements and cast him as a folk hero.

Ali's reputation has been questioned, however, with his partner telling an interviewer that Ali failed to complete work on the army projects and that the company has had to lay off 750 workers.)

While the Brotherhood protests fizzled, a pro-state rally in Cairo's Nasr City neighborhood attracted thousands of people, including some of Egypt's most famous celebrities and singers.

On Friday, a few limited protests organized by the Brotherhood were reported. Still, more than 2,000 people reportedly have been arrested in the past two weeks.

Sisi's rule appears to be secure despite an orchestrated campaign of hype by the Brotherhood and its sympathizers. He was greeted by thousands of Egyptians Friday when he returned from New York.

"Egyptians beware, they will never leave you alone," he said about the Brotherhood campaign. "They will never let you enjoy any achievement or succeed. It is a war between us and them."