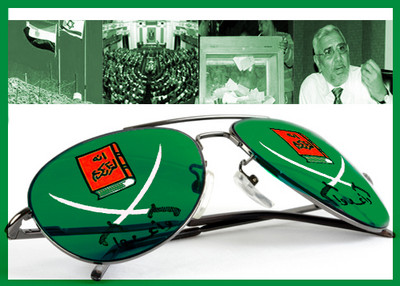 Much of the idealism and the promise of unity that emerged from the massive populist uprising that captivated Egypt and swept longtime President Hosni Mubarak from power in February seems to have been lost.

In the three months since, the Muslim Brotherhood—an Islamist movement that was banned under the previous regime—has grown more confident and has shed layers of its past façade, as it prepares for Egypt's important parliamentary elections in September.

The group has grown increasingly bold—announcing that it would raise its target for the number of seats it would contest in elections to 45-50% and forming a coalition with Egypt's hardcore Islamists. Both of these changes appear to be in direct contravention with earlier promises made by the Brotherhood in the immediate aftermath of the January 25th revolution.

But, while troubling to many, these changes are hardly surprising. "I was expecting [the Brotherhood] to be stupid enough to raise the percentage they promised to compete on because that's how they deal. They're very much opportunists," Shadi Al Ghazali Harb, a member of Egypt's Revolutionary Youth Coalition, told the Wall Street Journal. "Whenever they get a better opportunity, they seize it whether or not this will cost the whole country."

In the initial days following Mubarak's resignation, the Brotherhood took to the airwaves and the global press to tout its role in helping to bring about change in Egypt. Always cautious of how it is perceived in the public eye, senior Brotherhood leaders made sure to frame the revolution as a success for all Egyptians, and to downplay the group's Islamist aspirations.

Brotherhood Shura Council member, and former deputy leader, Mohammed Habib, explained how the Brotherhood saw its role in the post-Mubarak era. "The Brotherhood want to reassure the Egyptian people and the Arab and Islamic world that they do not seek power, or want to compete for power," he said. "[W]hat matters to them is that there is freedom and democracy."

Guidance Bureau member Essam El-Erian wrote an op-ed column for the New York Times calling for "reform and rights for all: not just for the Muslim Brotherhood, not just for Muslims, but for all Egyptians."

While the Brotherhood sought the "establishment of a democratic, civil state that draws on universal measures of freedom and justice," El-Erian wrote, it did "not intend to take a dominant role in the forthcoming political transition," and would "not [be] putting forward a candidate for" president.

However, the group's ambitions for electoral power have swelled dramatically since pledging not to contest more than a third of seats in Egypt's first free parliamentary election in over 30 years, with some officials setting a target of half the seats in Parliament or more. And a recent report in the London Telegraph indicates that the Brotherhood has formed a political alliance with Egypt's hard-line Salafi groups. This move runs counter to what the Brotherhood had previously been trying to do by posing as a centrist group, welcoming to all facets of Egyptian society.

The situation in Egypt "is still fluid," said Paul Marshall, senior fellow at the Hudson Institute's Center for Religious Freedom. "A few months ago, analysts were giddy about what was happening." But today, in the wake of mounting crime and violence targeting Copts, the situation there is "depressing," he said.

Now, just more than a month since that interview, the group's stated plans have changed again—albeit ever-so-slightly. On April 30, the Brotherhood Shura Council acknowledged its plan to contest half of Egypt's parliamentary seats through its "independent" political party, the Freedom and Justice Party (FJP), in September. In a public display of confidence, the Brotherhood's Supreme Guide, Mohamed Badie, has stated that if his group was to contest all available seats, it would be able to win in 75% of cases.

The Brotherhood appears to have remained more consistent about running a candidate for president, by standing by its decision not to officially run a candidate under either the Muslim Brotherhood name or the name of its affiliated political party, FJP.

Nonetheless, a Muslim Brother could become Egypt's next president.

A senior leader from the group's reformist wing, Abdel Moneim Abouel Fotouh, has stated his intention to run for president as an independent.

"I will run as an independent candidate in the coming presidential elections. I am not a member of any party now," Abouel Fotouh told Reuters.

The Brotherhood's official line remains that it is not fielding a presidential candidate, and it has vociferously refuted claims to the contrary, including the candidacy of Abouel Fotouh. It has launched an investigation into the senior leader and his campaign team, and has reminded all involved parties "of the principle of absolute obedience to the [MB] group's decision" not to run.

Other senior Brotherhood members have affirmed that Abouel Fotouh will "have to withdraw his MB membership" should he run for office. But with this public assertion, other Egyptian news outlets have cited sources within the group as saying that "other group leaders secretly support Abouel Fotouh."

One such leader is former Brotherhood Supreme Guide, Mohammed Mahdi Akef, who told Iran's Fars News Agency Monday that many in the group do not "stand against Abolfotouh," using an alternate spelling of his name. "Rather we wish him success" even if he "would not [be] represent[ing] the party in the upcoming elections."

Elections aside, other signs suggest that the Brotherhood is feeling pretty good about itself in the post-Mubarak era.

Bolstered by the return to Egypt of some of its most senior and savvy leaders, such as Kemal Helbawy, the group has begun openly reconnecting with its Palestinian progeny, Hamas. In a move that would have been all-but-impossible under the former regime, MB Supreme Guide, Badie, sat shoulder to shoulder last Sunday in a display of unity with Hamas leader, Khaled Mishaal, at the MB's newly-opened headquarters in Muqattam, Egypt.

This strengthened alliance between Hamas and the Brotherhood has serious implications for Egypt's neighbor, Israel, and the uncertain future of the "cold peace" that currently exists between the two nations.

Senior Brotherhood leaders were on record earlier this year saying that they should not be confused with extremist groups like Hizballah or Hamas because unlike those groups, the Brotherhood does not seek to eradicate the Jewish state.

"We will respect the peace treaty with Israel as long as Israel shows real progress on improving the lot of the Palestinians," Mahmoud Ezzat told CBS News in February.

But now working directly with Hamas, the Brotherhood has begun dropping its veneer of moderation by openly denigrating its Jewish neighbor and calling for a halt to bilateral relations.

"The Egyptian nation believes that normalization of relations with the Zionist regime is among the most important issues which should be stopped completely," Brotherhood leader Habib told Iran's Fars News. "The Egyptian nation believes that the Zionist regime is a danger threatening the national security of not just Egypt, but also other Arab countries."

Brotherhood leader Badie echoed this sentiment during last week's Hamas-MB joint meeting, concluding that Egypt should move in the direction of "continued unity against the 'Zionist' occupation" [Israel].

Those characterizations of Egyptian attitudes toward peace with Israel may not be accurate. A recent poll conducted by the United Nations-affiliated International Peace Institute found that some 60% of Egyptians "support the peace treaty with Israel—as long as an independent Palestinian state is established alongside the Jewish state."

Where the Brotherhood goes from here is unclear. If recent actions are any indicator, the group will continue to bare more of itself as it feels increasingly confident of the Egyptian public's appetite for political Islam.

If it weren't utterly predictable, I doubt I could have predicted it all so perfectly. I have no crystal ball, but it seems I can see the future. From the very beginning last January I told my friends to watch the MB take over. Their reactions were variously to laugh it off or to say it was just fine because the MB is not a bad bunch, just democratically inclined Egyptian reformers. I was roundly condemned as an Islamophobe for saying the MB is a reactionary religious movement bent on the establishment of their own theocracy and the destruction of Israel. My problem in seeing all this correctly, I was told, was because my hatred for Islam colored my judgement.

Alright, I admit it, I do despise Islam as a religion. I also despise Nazis and Maoists. I also despise the whole multi-cultural-moral-relativist movement. I come out of the free speech movement of the 60's and we started this ball rolling, but it has become our Frankenstein. Now there is only free speech for one side, "the right side", the far left side. If you disagree with much of the new gospel of universal relativism, you, like me, will be outcast as a neocon. You will be called "unevolved".

Now I find that even this situation was utterly predictable. Read "The Treason Of The Intellectuals", and you, like me, may be surprised at how eerily contemporary to the United States in the 21st century a book from 1920's France can seem.

I have been called every variant of "backward" you ever heard but my predictions keep coming true. It makes me think I may have my finger on the pulse of reality somehow and it gives me some confidence as to my analysis of events, but it gives me very little joy. I had hoped, back in those heady days of my youth, for a world gone beyond the last gasps of medieval superstition, sectarianism, and tribalism. But it now seems to me that I did not understand much of what I and others were saying, because we encouraged tribalism in our romantic (utterly uninformed) view of human events. While I still think we did some kind of good back then I have found the good effects of it more and more difficult to identify. My generation has become as complacent as our parents'. Only the issues have changed.

My becoming an outcast of the left has caused me much. I have lost more than a few old friends over it all. I have been insulted with impunity by very polite people. When my comments turn out to have been prescient they are dismissed all the same. I'm playing a tune they don't want to hear no matter how well it harmonizes with events. So when (not if) the MB takes over Egypt and begins to construct a Sunni Islamic state based on Sharia traditions I will not be surprised and my old friends will not notice, just as they do not now notice how repressive and regressive this global Islamic is.