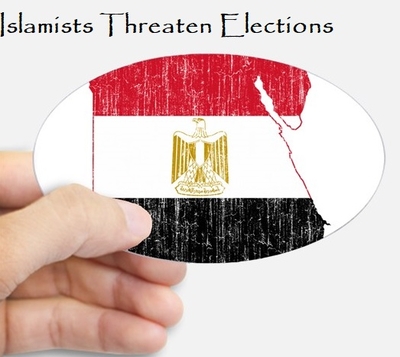 Islamists have been attempting to unsettle the Egyptian political scene for decades by infiltrating the political process or disrupting it through systematic negative propaganda and violence. After the Muslim Brotherhood's 2013 ouster, Islamists' despair in the political process has only translated into threats and violence to impede the process in Egypt, especially during the upcoming presidential elections.

Islamists, led by the Muslim Brotherhood, have called for the boycott of elections, while their affiliated terrorist groups Hasm and Liwa Al Thawra (Revolution Brigade) – designated as terrorist groups by the United States on Jan. 31, are still operating to disrupt and sabotage the elections process. The Egyptian police forces arrested 14 and killed three Hasm members in a preemptive operation before Hasm executed its plan to attack during elections.

At the same time, ISIS vows to attack voters and polling stations across the country. Elections mark "the greatest day of polytheism in the land of Egypt," said a Feb. 11 ISIS recording, titled "Guardians of Al Sharia." "These days, Egypt's tyrants are preparing for their day of polytheism, election day. So ruin their day of polytheism," said an ISIS terrorist identified as Mohamed Al Masry. "Spill their blood, and start with the heads of unbelief among them. We hereby warn the Muslim public in Egypt and Sinai during these polytheist days not to come near the polling stations and the courts, and to [avoid large] gatherings, for they are a target for us. We will go forth on this path, Allah willing, determined to shatter every idol and remove every tyrant."

He added a special threat to Christians: "And it is worth mentioning in these days that the mujahideen (jihadists) in all regions of Egypt aim to escalate their attacks against the apostates, belligerent Christians." Al Masry also called upon non-Islamists, whom he called "monotheist brothers," to join in the violence. "Kill whoever you can among the soldiers of the apostate Al-Sisi or belligerent Christians, if you are sincere in your support and love for the truth."

Similarly, al-Qaida leader Ayman Al Zawahari has called on Muslims to rise against what he labeled as the tyrannical regime in Egypt during the elections. "I call on everyone ... to work to uproot this apostate, criminal and corrupt regime, and to [wage] jihad with weapons, money, word and actions, raids and ambushes, strikes and protests," Al Zawahiri said. He remains focused on establishing a foothold in Sinai where ISIS-affiliated groups such as Ansar Beit Al Maqdis already have gained followers. Al-Qaida's new Sinai affiliate, Minbar Sinai, is waging a social media war against ISIS's Wilayat Sinai, accusing it of cowardice.

Egyptian authorities arrested Islamist former presidential candidate Abdel Moneim Aboul Fotouh in Cairo Feb. 8 for allegedly plotting to support terrorist acts with the Muslim Brotherhood branch in United Kingdom. Authorities say a search of his home uncovered documents with Muslim Brotherhood instructions for inciting citizens against the Egyptian government during elections and spreading rumors aimed to create instability and pave the way for the Brotherhood to re-emerge as political force. Aboul Fotouh is a former Muslim Brotherhood member and a co-founder of the Gamaa Islamiya in Egypt in the 1970s. Gamaa was responsible for major terrorist operations including the 1981 assassination of President Anwar Al Sadat and the 1993 World Trade Center bombing under instructions from its former spiritual leader Omar Abdel Rahman, known as "the Blind Sheikh."

Aboul Fotouh left the Egyptian Muslim Brotherhood in 2009 and formed his own Islamist party "Strong Egypt," which attracted a handful of liberal and leftist activists through a platform emphasizing social justice. Aboul Fotouh enjoyed an image of a unifying leader that encouraged him to run for president in 2012, when he lost to his former Brotherhood colleague Mohamed Morsi. Despite formally leaving the Brotherhood, he remains a staunch believer of the group's rhetoric and has maintained ties with its leaders. This was reflected when Egyptian authorities arrested six Muslim Brotherhood members who had taken refuge on a farm he owns.

Aboul Fotouh gained his popularity among Islamists due to his open rejection of the 1979 Egyptian-Israeli peace treaty. He joined the Afghan mujahideen in the 1980s, and had photos taken with them during his stay. He claimed that he was there for humanitarian aid purposes.

Meanwhile, the Egyptian army launched its largest counter-terrorist operation in years on Feb. 9, with "Sinai 2018." It involved 60,000 troops and 10,000 police officers. The ongoing operation has killed 71 terrorists and caused the arrests of another 1,852 people, though many were released after being cleared of all charges. The military claims it destroyed 158 terrorist sites along with 1,282 hideouts and stores. Al Sisi vowed to secure Sinai within three months in November and Operation "Sinai 2018" maybe the final step in attaining that goal.

Though Islamist groups have been weakened since 2013, their statements, combined with recent investigations, make it clear they will continue to disrupt Egypt's political process. While their methods may vary, they see democracy as an act of apostasy, or as a means to an end. Each vision leads to restoring power to Islamists who seek a theocratic caliphate on the ruins of the countries they attempt to infiltrate, as they deem democracy an act of apostasy.