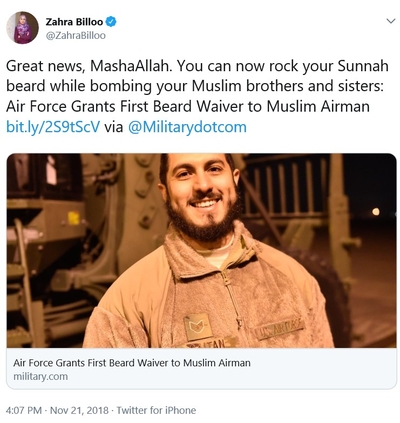 Council on American-Islamic Relations (CAIR) official Zahra Billoo continues to judge Muslims who do not fall in line with her radical agenda.

Last week, Military.com reported that the U.S. Air Force formally granted Staff Sgt. Abdul Rahman Gaitan a religious waiver to don a beard in service. Gaitan is the first Muslim airman to receive such an accommodation.

In response, Billoo mocked Muslims serving in the U.S. military, sarcastically tweeting: "Great news, MashaAllah [according to God's will]. You can now rock your Sunnah beard while bombing your Muslim brothers and sisters."

Instead of praising the U.S. military for overturning long standing practices to accommodate religious practices, Billoo basically labeled American Muslims in the military as traitors for participating in combat operations targeting terrorists in predominately Muslim-majority countries.

This sentiment is not surprising given Billoo's history of defending terrorists. On Saturday, at an American Muslims for Palestine (AMP) conference, Billoo glorified Palestinian "martyrs' families" whose relatives participated in a terrorist attack against Israelis – or as Billoo called it: "an act of resistance."

"Even I don't fully understand how horrible an apartheid Israel is doing," Billoo said in a recording obtained by the Investigative Project on Terrorism. She was describing a recent trip to the Palestinian territories. "We hear here that the martyrs' families are rewarded with homes and flowers and food. We learn that in Palestine that happens, because it doesn't matter whether or not you approve of your teenager committing a crime. Whether or not it's a crime is something we can debate. But it doesn't matter whether or not you approved of it. The soldiers show up at your house the day after you lose child in an act of resistance. And they bulldoze your home. So of course, your community buys you a home."

These are the views of a person who received a Community Builder Award last month, someone with a history of propagating radical Islamist and anti-Semitic remarks.

Earlier this month, Billoo openly stoked division by drawing a line in the sand by defining who she believes is a legitimate Muslim leader and who is not

"I'm really cautious of who I call a Muslim leader," Billoo said at a gathering with the Ecumenical Peace Institute, warning others to be aware "as you see countries in the Middle East, and even Muslim activists in the United States, take problematic positions supporting the state of Israel or opposing the Boycott, Divestment and Sanctions movement."

Advocating for sanctions and boycotts targeting Israel, while avoiding similar calls against other states that violate human rights on a far larger scale, is a double standard that amounts to anti-Semitism.

This sentiment is expected from Billoo who, like other U.S. Islamist figures, consistently opposes any type of engagement or interfaith dialogue with organizations that maintain ties to Israel.

Like other U.S.-based Islamists, Billoo also made several absurd comparisons between the Islamic State terrorist group and the Israeli military.

In 2015, Billoo asked whether "more American youth joined the IDF than American youth have joined ISIS? Is one genocidal group different than the other?

That year, Billoo responded to an article questioning whether ISIS terrorists were criminals or victims: "Are westerners who go to fight for the Israeli Defense Forces victims, or racist, apartheid promoting criminals?" A previous post expressed more fear of the FBI and the IDF than of ISIS.

No matter what Israel or the U.S. governments do to defend their populations, U.S.-based Islamists – like Billoo – will defend the terrorists.

She has also urged Muslims to "build a wall of resistance" between themselves and law enforcement, discouraging contact with the FBI.

Last Saturday, Billoo initially acknowledged that there are debates concerning whether terrorism is a crime. But she made her position crystal clear.

To Billoo, terrorists attacking and killing Israelis engage in a legitimate "act of resistance." But American Muslims working in the U.S. with law enforcement or fighting terrorists while serving in the military is not.