As the coronavirus (COVID-19) pandemic sweeps across the world, some Islamists are pushing a theory that God is punishing infidels for disobeying his commands. They note that the virus broke out in Wuhan, China, and that the Chinese government is repressing Uyghur Muslims. ISIS reportedly issued "Shariah directives" in its latest newsletter, telling followers to stay out of Europe.

The coronavirus is a "torment sent by God on whomsoever He wills," the newsletter said.

"Illnesses do not strike by themselves but by the command and decree of God."

When initial reports about the virus came out of China, Salafists in Egypt, Morocco and elsewhere dubbed it a "Soldier of God" targeting those infidels who work against him. "The power of God strikes upon China, Communism and Buddhism: Crowded Hospitals. China declared war on Islam and Muslims and persecuted our brothers Uyghurs," Abdul Razzak al-Mahdi, a Syrian Salafist tweeted on Jan. 20. "God gave them a soldier (virus). And many of God's soldiers said, Glory be to Him...O God, increase their suffering and affliction until they stop fighting your religion and worshipers." An Egyptian cleric celebrated that the "power of God strikes upon the Buddhist communist China. China launched a war against our Muslim Uyghur brothers and God sent his soldier [coronavirus]. God is not unjust to his worshippers."

Videos of Islamist clerics praying for the demise of Chinese communists were common. "After China isolated more than 5 million Muslims," one wrote Jan. 25, "the whole world is isolating China because of the outbreak of the coronavirus among Chinese in fear of contamination."

The tenor of Islamist comments changed after the outbreak spread into other countries, particularly Iran. Islamic Revolutionary Guards Corps (IRGC) Major General Hossein Salami suggested that the coronavirus might be biological weapon developed by the United States against China and Iran.

Iran now is suffering one of the world's worst coronavirus infestations, with a reported 853 people killed by the illness as of Monday. The actual number could be dramatically higher. Its victims include high-ranking government officials and senior clerics.

Scientists throughout the world, meanwhile, are racing to develop a vaccine to end the crisis. An American-developed vaccine started clinical trials Monday. An Israeli laboratory reportedly is on the cusp of a similar formula. Should either prove successful, a new dilemma faces those who insist the two countries are the root of the world's evils.

Algerian news outlet Al Masdar published a conspiracy theory under the headline, "A Zionist organization is behind the Coronavirus and the Zionist entity (Israel) claims to have found the vaccine."

Iranian Mullah Nasser Makarem Shirazi declared it is prohibited to take any Israeli medication for the virus unless there is no alternative. Even Western Israel haters couldn't wrap their heads around the prospect.

"I'd rather take my chances with the virus than consume an Israeli vaccine," wrote Roshan M. Salih, an Iranian Press TV journalist and editor of the British Muslim news site Five Pillars. 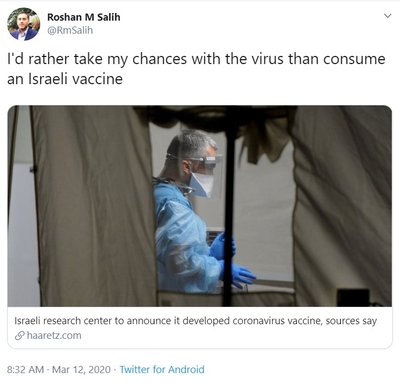 When people reacted angrily, he wrote that he "activated the Israel lobby."

"The United States waged biological warfare against its own Congress in 2001 with the anthrax component of the 9/11 anthrax false flag operation," he wrote, "which terrorized Tom Daschle and Patrick Leahy, the leaders of the movement that blocked the Patriot Act, into giving up and allowing the Patriot Act.

So the United States is run by lunatics, by psychopaths who are entirely capable of launching World War 3 by way of a biological warfare attack on China and Iran, with the Iran component presumably led by Israel. That's the most likely explanation for what we're seeing."

This is the kind of rot Press TV publishes.

In Iraq, prominent Shiite political leader Moqtada al-Sadr refused any vaccine coming from the United States, accusing President Trump of " spread[ing] this virus especially [since] most who suffer from its are America's enemies... O Trump if you are an atheist and think yourself as a healer, we don't seek anyone's help but God," al-Sadr said. "Any cure that comes from you or your infested companies, we don't accept it. You are not just an enemy of God but an enemy of nations and a virus that spreads wars and pestilence."

Hizballah's Al Manar TV published an op-ed by Ali Abadi saying that the United States could benefit from downsizing in the Chinese economy. "At least we know that the United States is experiencing a feverish anxiety about the continued growth of China's economy, and it has tried for many years to curb this growth through political pressure to force Beijing to take steps such as raising the value of Chinese Yuan," Abadi wrote. "American think-tanks fear that the USA will lose its global leadership position through the rapid growth of China."

The global COVID-19 outbreak gave Islamists a new opportunity to spew anti-Semitism and conspiracy theories about their perceived enemies. Even though the virus has hit the United States and Israel, many Islamists insist on seeing a conspiracy behind everything.