A Disappointing, Muted Response to Imams Calling for Violence 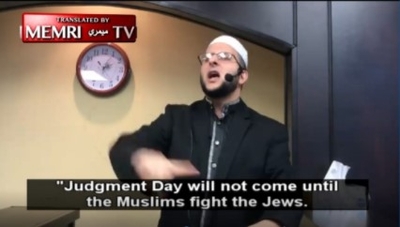 A radical imam called on Muslims to "kill the Jews" in a Friday sermon entitled, "Our Duties Towards Al-Quds (Jerusalem)." But this imam was not a spiritual leader in the Palestinian territories or a preacher with an Islamic State affiliation. This imam was preaching from the United States, alongside other U.S.-based Muslim leaders who have promoted anti-Semitism and incited violence against Jews following President Trump's Dec. 6 proclamation recognizing Jerusalem as Israel's capital.

"My brothers, the Prophet Muhammad brought the good tidings, when he said: 'Judgment Day will not come until the Muslims fight the Jews. The Muslims will kill the Jews, and the Jews will hide behind the stones and the trees, [which] will say: Oh Muslim, oh servant of Allah, there is a Jew hiding behind me, come and kill him'... This is the promise of Allah," Al-Rousan said in a video posted by the Tajweed Institute's social media accounts and translated by the Middle East Media Research Institute (MEMRI).

The Tajweed Institute promotes itself as a non-profit "that strives to teach and spread the authentic knowledge of the Glorious Qur'an."

Al-Rousan went on to incite Muslims to kill Jews in Israel and the territories: "The hour (Judgment Day) will not start until Muslims fight the Jews there, in Palestine."

That same day, Sheikh Aymen Elkasaby from the Islamic Center of Jersey City, called for "the plunderer oppressors (Jews)" to be destroyed.

Meanwhile, a Texas-based imam called for Israel's destruction in a recorded prayer posted to his Facebook page Dec. 7, according to an Investigative Project on Terrorism (IPT) translation.

This is not a new phenomenon. Following Palestinian violence over new security measures at Jerusalem's Al Aqsa Mosque following a terrorist attack in July, an imam at the Islamic Center of Davis in California delivered a hateful sermon filled with anti-Semitic vitriol and called for the death of all Jews.

"Oh Allah, liberate the Al-Aqsa Mosque from the filth of the Jews. Oh Allah, destroy those who closed the Al-Aqsa Mosque. Oh Allah, show us the black day that You inflict upon them, and the wonders of Your ability. Oh Allah, count them one by one and annihilate them down to the very last one. Do not spare any of them," Ammar Shahin said.

The Islamic Center of Davis released a statement claiming that Shahin's remarks were taken "out of context." But there is no other way to interpret the imam's sermon than a religious justification for killing Jews. Shahin later issued an apology claiming: "...I let my emotions get the best of me."

On the same day as Shahin's sermon, an imam from California's Islamic Center of Riverside also incited violence against Israelis. "Oh Allah, liberate the Al-Aqsa Mosque and all the Muslim lands from the unjust tyrants and the occupiers. Oh Allah, destroy them, they are no match for You. Oh Allah, disperse them, and rend them asunder. Turn them into booty in the hands of the Muslims," preached Sheikh Mahmoud Harmoush.

American Islamist groups remained silent in the wake of these sermons, and have not outright condemned the imams' behavior. It remains to be seen whether these organizations will address the most recent cases of blatant anti-Semitism and terrorist incitement. One case is an aberration. Two cases are noteworthy. This is a trend, however, that largely is going unnoticed.