Qatari news network Al Jazeera portrays itself as podium for free speech in the Middle East. But since its 1997 founding, it has gained notoriety as an outlet willing to air views of Islamist extremists and jihadists. It often was the first to receive al-Qaida statements and videos, including those by founder Osama bin Laden.

The Qatari network promoted Islamist movements during the 2011-12 Arab Spring revolutions. It propped up Islamist agendas in the Middle East, especially those tied to the Muslim Brotherhood. The network's pro-Brotherhood bias prompted more than 20 Al Jazeera staffers to resign in 2013 in protest.

That background is relevant in understanding an Al Jazeera anchor's reaction last month to the new U.S. peace plan, dubbed the "Deal of the Century."

Al Jazeera senior anchor Jamal Rayyan asked his Twitter followers whether Arab leaders who supported the deal should be assassinated. 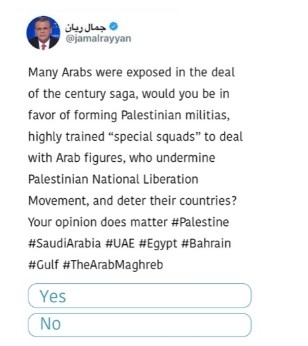 "After the Deal of the Century revealed the presence of Arab figures, would you approve that the Palestinian factions form highly trained special units to 'handle' the Arab countries figures who are working on thwarting the Palestinian Liberation movement in order to stop these countries? Your opinion is important."

What happened next shows that Al Jazeera's lenient policy toward terrorism incitement extends beyond the guests it books. The network has made no comment about its anchor's incendiary rhetoric.

Rayyan deleted his question about Arab leaders in the wake of backlash from social media users who accused him and Al Jazeera of inciting and endorsing assassinations and terrorism. A hashtag, "Jamal Rayan incites terrorism," trended on Twitter.

Rayyan made no other comment about his tweet. But he did post a statement thanking "all the respectable followers who cared about my health condition and their prayers for quick recovery because of a small break in my legs. Due to my busy schedule as a result of the physiotherapy I will not be able tweet till further notice. Goodbye."

But he continued tweeting next day. "Like a hawk, I will rise above the jungle struggle," he wrote. "I know if I fall even the smallest of creatures will try to crush me in a jungle where even its smallest creatures are wolves."

Saudi Arabian-financed Al Arabiya and other Arabic media outlets accused him of faking an injury to avoid the embarrassment caused by his public incitement for assassinations. Al Jazeera remained silent about the entire incident, however, and Rayyan was not disciplined. Later, he posted a video in which he wept and blamed Saudi Arabia and the UAE for the U.S. peace proposal. He also made an unsubstantiated claim that former British Prime Minister Tony Blair was "the Godfather behind this deal."

In response to Rayyan's poll question about assassinations, an Egyptian lawyer who practices before the country's Supreme Court filed a complaint, saying his comments incited terrorism. The complaint described Rayyan as a Palestinian with a hostile stance against Egypt who receives substantial financing from Qatari intelligence.

Rayyan's informal poll about the U.S. peace plan is not the first time the network asked viewers whether they support terrorist attacks. "Do you support al-Qaida bombings in Algeria?" a 2007 Al Jazeera poll asked. A majority, 54 percent, said they did.

"Anyone who can fire a bullet at him to rid the people and country from him, he should do it," Qaradawi said.

Many Egyptians have been particularly wary of Palestinian militants since 1978, when the Abu Nidal terrorist organization assassinated Egyptian pro-peace novelist and Minister of Culture Yusuf el-Sebai. El-Sebai joined President Anwar Sadat in his historic visit in Jerusalem in 1977 before signing the Camp David accords. So a call from a senior Al Jazeera anchor for Palestinian terrorists to assassinate pro-peace Arab leaders will stir some bad memories.

In another tweet earlier this month, Rayyan posted a video of Iranian Foreign Minister Mohammad Javad Zarif commenting on the U.S. peace plan. The Iranian Zarif, he wrote, "speaks Arabic better than many Arab ministers."

Palestinians, Zarif said in the video, "shall defeat the American-Zionist will through their volition ... Iran "categorically rejects the so called deal of the century because it aims to waste the cause, rights and holy places. Jerusalem will remain the capital of Palestine which we look forward for its complete liberation."

Al Jazeera and its online affiliate AJ+ also have pushed anti-Semitic messages. Last May, the network broadcasted a video questioning the number of Jews who were killed in the Holocaust.

"[T]he number of victims of the Holocaust remains one of the most prominent historical debates to this day," narrator Muna Hawwa said. She went on to say "Israel is the biggest winner from the Holocaust, and it uses the same Nazi justifications as a launching pad for the racial cleansing and annihilation of the Palestinians."

In the wake of criticism, AJ+ removed the video and suspended two journalists who were involved in producing it. That disciplinary action casts the lack of any punishment against Rayyan in a disturbing light. He continues his online onslaught against any peace initiative and appears free to call for assassinating Arab leaders who participate.