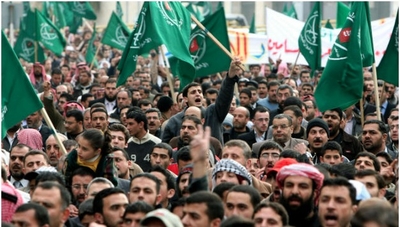 In an effort to invigorate the Muslim Brotherhood, one of the group's leaders, Magdy Shalash, reminded supporters that the organization's main objective is establishing an "Islamic Caliphate" based on "Sharia" law.

"The Muslim Brotherhood was established for a general overall purpose, namely, the return of the comprehensive entity of the Umma (Muslim community)...the Islamic Caliphate, which is based on many Sharia proofs," Shalash wrote in a Facebook post on Wednesday that was translated by the Investigative Project on Terrorism (IPT).

While many Islamist apologists attempt to defend the use of terms like "caliphate" or "jihad" as purely religious and peaceful concepts, Shalash does not try to hide the Brotherhood's true colors.

He calls for "the return of all states Islam ruled, such as Andalusia and others, to the quarters of the coming Caliphate." Andalusia is part of today's Spain.

Islamist sympathizers who view the Brotherhood as a moderate force that only seeks to increase Islam's role in political life fail to acknowledge the organization's core mandate – to establish Sharia law and firm rule over all territories ever controlled by Islamic governance, no matter how long ago.

Shalash praised the "Ottoman Caliphate" since it "eliminated a state of pluralism and fragmentation in name of a plurality of Islamic countries..."

He wants internal Brotherhood elections to establish a unified leadership since "theorizing about something other than the overall goal (establishing the Caliphate)... puts the group in a state of fragmentation and division..."

The Brotherhood called for an "Islamic Intifada" – a violent uprising – against Israel July 14 following a deadly Palestinian terrorist attack in Jerusalem.

The statement reaffirmed the organization's extremist and divisive worldview, labeling any Muslim a "traitor" if they fail to join the uprising against Israel: "The Muslim Brotherhood stresses that defending holy places, and blood and goods is a Sharia duty and a duty to every Muslim, which cannot be ignored except by a traitor or someone submissive."

Palestinian terrorist organizations Hamas and the Palestinian Islamic Jihad followed the Brotherhood's lead and called for Palestinians to "escalate the Quds Intifada" which fueled days of heightened tensions between Arabs and Jews in Jerusalem.

"With life, with blood/we sacrifice for you Al Aqsa" and "the gate of Al Aqsa is of iron [Hadid], no one can open it but a martyr [Shahid]." These chants, translated by IPT, show how U.S. Islamist groups cultivate an atmosphere where terrorism and violence against Israel is openly encouraged.