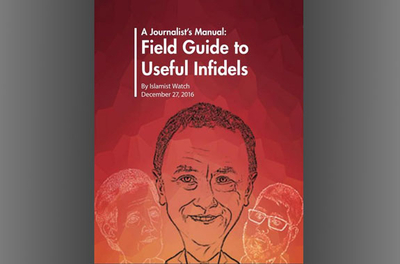 The MEF report seems to be a direct response to the Southern Poverty Law Center (SPLC)'s absurd attempt to denigrate people who focus on Islamist violence and Islamist political activity as bigots. That report was called, "A Journalist's Manual: Field Guide to Anti-Muslim Extremists."

An example of Nawaz's alleged anti-Muslim extremism? He republished a cartoon of Islam's prophet Muhammad and said he was not offended by such images.

Many of the people profiled in the MEF report try to deny any connection between Islamist terrorist groups and the faith in whose name they fight. This requires overlooking the Quranic justification and Islamic imagery that terrorists offer for their violence.

Many of the non-Muslim figures listed in MEF's report cooperate with prominent Islamist groups including the Council on American-Islamic Relations (CAIR), which has roots in a U.S-based Hamas-support network created by the Egyptian Muslim Brotherhood.

Journalists should understand that relying on Islamists like those in CAIR risks "assisting with the 'normalizing' or 'mainstreaming' of Islamist supremacist ideology, a belief system just as dangerous and opposed to American ideals as white nationalism," the MEF report said. It also cautions against getting too caught up in impressive-looking resumes, noting that "academia includes some of the most egregious useful infidels."

It encourages people to seek out "moderate Muslims and reformers [who] are counting on the media to not blindly accept the Islamist narrative but to question Islamists' self-appointed role as the voice of an imaginary unified Muslim community."

For example, Georgetown University's John Esposito has advocated for Islamism as "the best pathway for the Muslim world to enter modernity," the report said, also noting his support for the Muslim Brotherhood and Palestinian Islamic Jihad operative Sami Al-Arian.

CIA Director John Brennan is criticized for helping facilitate the removal of any references to Islamism in FBI training materials. To accomplish the purge, Brennan actively collaborated with known U.S. Muslim Brotherhood fronts including ISNA and MPAC, among others. Many of Brennan's related speeches often sought to divorce Islam from terrorism.

Speaking at the Center for Strategic and International Studies in 2009, Brennan rejected the term "jihadists:" Jihad is "a legitimate term ... meaning to purify oneself or to wage a holy struggle for a moral goal..."

While the term 'jihad' may have multiple meanings, terrorists call themselves jihadists while waging violent campaigns in an effort to establish Islamist rule worldwide. Pretending that Islam has nothing to do with jihadist violence promotes a culture of political correctness that inhibits law enforcement from tackling the threat from radical Islamism.

Secretary of State John Kerry also plays into this narrative, trying to disassociate any role for radical ideology in fueling Islamist violence. At a press conference earlier this year, Kerry said: "Daesh [ISIS] is in fact nothing more than a mixture of killers, of kidnappers, of criminals, of thugs, of adventurers, of smugglers and thieves... And they are also above all apostates, people who have hijacked a great religion and lie about its real meaning and lie about its purpose and deceive people in order to fight for their purposes."

Pretending that Islam or Islamism has no role in fueling most global terrorism today obscures the ideological confrontations required to counter the appeal of Islamist terrorist groups. This confrontation should be led by more moderate Muslims who unfortunately are sidelined by too many politicians and journalists in favor of radical Islamist organizations.

Having prominent U.S. politicians and other non-Muslim officials publicly engaging in Islamic theological debates regarding who is a true Muslim and who is an "apostate" is counterproductive and resembles a strategy that terrorist groups utilize to label infidels. Moderate Muslims correctly feel that radical Islamists and terrorist organizations are exploiting their religion to achieve their supremacist objectives. Yet moderate voices are continuously silenced by the likes of the people featured in the MEF report.

There is a name for the preposterous rationalizations that useful infidels use to deny the connection between terrorism and Islam. It is called cognitive dissonance and it is a powerful strategy of mass psychology deliberately being used to confuse, manipulate, and destabilize an unsuspecting public.

Cognitive dissonance is the state of having inconsistent thoughts, beliefs, or attitudes, especially as relating to behavioral decisions and attitude change. The anxiety and tension created by having inconsistent thoughts is so disturbing that it mobilizes people to either change their thoughts or change their behavior in an attempt to regain equilibrium. Cognitive dissonance is being used to manipulate the public and effect seismic shifts in public opinion - they are being propagandized to believe the fiction that terrorism has nothing to do with Islam.

It is not enough for IPT to point out the preposterous inconsistencies in the rationalizations of the useful infidels - the public needs to know that cognitive dissonance is a deliberate attempt to disable their critical thinking and their accurate common sense assessment that a terrorist screaming Allah Akhbar is a jihadist with religious motivations. Political correctness under Obama has silenced the public but Donald Trump gave them their voices back.

Every champion of free speech in the world including Geert Wilders, Robert Spencer, Pamela Geller, Nicolai Sennels, Ayaan Hirsi etc etc etc is saying "The Emperor has no clothes!" They are all trying to eliminate the cognitive dissonance created by useful infidels with the voice of truth. They all insist upon objective reality and vehemently reject the insanity of subjective reality.

IPT can help them by exposing and explaining the powerful weapon of cognitive dissonance.