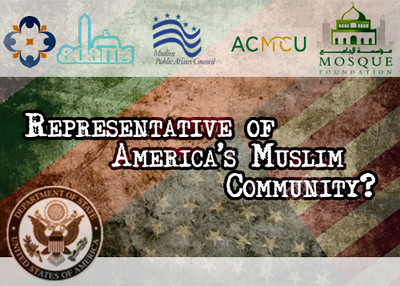 The Obama administration's efforts to conquer hearts and minds in the Muslim world as part of its broader strategy to battle Islamist terrorism may be a laudable goal. But the administration's continued pandering to radical Islamists both at home and abroad continues to baffle and frustrate opponents of political Islam and Islamist organizations.

The administration has been swift to embrace newly-elected Islamist regimes in the Middle-East despite their violent and pro-jihadi rhetoric. Last month for example, it heaped praise on Egypt's new Islamist leader Mohammed Morsi for helping broker a truce between Israel and Hamas after eight days of fighting. In lauding Morsi, the U.S. government overlooked statements supporting Hamas issued by Morsi's colleagues in the Muslim Brotherhood and their celebration of rocket attacks on Israel. Morsi was a senior Brotherhood official for years before seeking office.

This international outreach to authoritarian Islamist regimes bestows undue legitimacy on Islamists and renders democratic and secular opposition and dissident groups voiceless. The same flawed outreach is being pursued domestically.

The latest example comes from a State Department-sponsored delegation last year of five Bulgarian Muslims who came to discuss the role of religion in the United States. Details of the trip, funded by the Bureau of Educational and Cultural Affairs under its International Visitor Leadership Program (IVLP), were obtained by the Investigative Project on Terrorism via a Freedom of Information Act request.

The delegation hoped to "learn about the environment of religious tolerance in the U.S. and how religious groups function in a democratic society with a separation of church and state," records in the 379-page FOIA release show. It described meetings the delegation had with leading Islamist groups like the Council on American-Islamic Relations (CAIR) and individuals in Washington, D.C., Philadelphia, Salt Lake City and Chicago from Sept. 26-Oct. 14, 2011.

This is a problem that has been detailed before. Rather than seeking views from the broader, more diverse Muslim American community, government officials grab at "the lowest hanging fruit," said Zuhdi Jasser, a Phoenix-based doctor who heads the American Islamic Forum for Democracy. "But they ignore ideological diversity and instead take the shortcut of generally allowing those Muslims who are part of a national and global political Islamist movement to represent our faith community."

"When confronted the White House and State Department will say that the ideological positions of Muslim groups is not their concern," added Jasser, whose appointment this year to the U.S. Commission on International Religious Freedom sparked ire among Islamists.

"In part this also happens out of an absurd degree of political correctness and in part because these organizations have been very successful at branding themselves as the 'voice of the Muslims.' Even our National Strategy on Counterterrorism has been hijacked by this behavior, where it references the word ideology over 20 times but never names the ideology. The truth is that there is not and will never be one Muslim voice. We are a very diverse community…."

The government's failure to distinguish "Islam" from "political Islam" and its "willful engagement with non-violent Islamists" has resulted in the Islamists "owning the narrative," she said. In congressional testimony given in June, she also highlighted the threat Islamist ideology poses to the American democracy:

"While we have been pursuing conventional international warfare and in fact have assassinated the leader of Al Qaida for instance, we have remained dangerously vulnerable because of our delayed realization of the political science aspects of Islamist ideology and the very serious threat this poses to our democracy," Ahmed said. She described threats to free speech in the debate over radical Islam due to threats of litigation and false claims of bigotry that are used to stifle other points of view. Already, due to Islamist influence, the U.S. government has stopped using words like "Islamist" and "radical Islam."

"This sanitization of our lexicon reveals a shocking and perhaps specious reluctance to engage with the problem or worse, a foolhardy embrace, unintentional or otherwise, with the Islamist stance," Ahmed said.

"These are vulnerabilities which cannot be safeguarded by drones, or gunships but instead must be secured by counter ideological warfare which begins here, by widening the debate, discussion and scholarship in the area."

Such considerations were absent in planning the Bulgarian delegation's itinerary, as the FOIA documents show a parade of meetings with prominent U.S.-based Islamist organizations and individuals.

The delegation, for instance, visited the headquarters of the Muslim Public Affairs Council (MPAC) in Washington, D.C. and met with Haris Tarin, director of the organization's Washington office. Founded in the U.S. in 1986, MPAC has a history of defending designated terrorist organizations and their supporters, opposing U.S. counterterrorism efforts, and spewing anti-Semitic rhetoric. The group has questioned America's designation of Hamas and Hizballah as terrorist groups and called the Hizballah bombing of a U.S. Marines barracks in Beirut as "exactly the kind of attack that Americans might have lauded had it been directed against Washington's enemies."

Tarin has been critical of U.S. foreign and counterterrorism policies, has attempted to whitewash the jihadist threat, and embraced senior Muslim Brotherhood leaders. On Nov. 29, 2011 MPAC hosted a Capitol Hill forum on "Islamic Political Movements and the Arab Spring: Committed to Democracy and Pluralism?" The forum was followed by special dinner with Rachid Ghannouchi, leader of Tunisia's Ennahda Party. Tarin was a featured speaker at the event. He wrote a post on his Facebook page praising Ghannouchi: "Ghannouchi is an [sic] modern intellectual giant on Islam and governance. BIG TIME! If you are in DC and want to come, hit me up!"

In an interview with the Al Arab Qatari website six months earlier, Ghannouchi called for the destruction of Israel. "I give you the good news that the Arab region will get rid of the bacillus of Israel. Sheikh Ahmed Yassin, the leader of Hamas, said that Israel will disappear by the year 2027. I say that this date may be too far away, and Israel may disappear before this," Ghannouchi said

The delegation also visited the ADAMS Center, a radical Northern Virginia-based mosque that was found to be home to Saudi-produced radical and jihadist literature. According to a 2005 Freedom House report on radical Saudi literature found in American mosques, the materials collected by investigators included a fatwa that forbids Muslims to become United States citizens since the country is governed by infidels:

"It is forbidden for a Muslim to become citizen of a country [such as the United States] governed by infidels."

The Bulgarian delegation met with the staff of the CAIR office in Chicago. CAIR was founded by leaders of the Islamic Association for Palestine (IAP), formerly a central player in Hamas' support network in the U.S. Evidence in the Hamas-financing trial of the Holy Land Foundation placed CAIR within the "Palestine Committee," a network of Muslim Brotherhood-tied organizations in the United States working to support Hamas.

Internal records entered into evidence in the case showed that the Palestine Committee was created to support Hamas "with what it needs of media, money, men and all of that." HLF and five of its employees were found guilty in 2008 on 108 counts for funneling money to Hamas through zakat (charity) committees in the Palestinian territories.

The delegation also visited the Mosque Foundation of Bridgeview, Ill., where they met with Kifah Mustapha. Mustapha also was implicated in the HLF investigation, listed by prosecutors as a Palestine Committee member. Mustapha was a paid HLF fundraiser and sang in the al-Sakhra band, which frequently performed at HLF events.

Mustafa is shown in a video exhibit introduced in the HLF trial performing with the al-Sakhra musical troupe. Mustafa can be seen singing in the chorus supporting Hamas' call for jihad:

loudspeakers, with freedom. Every day it resists

with stones and the dagger. Tomorrow, with God's

help, it will be with a machine gun and a rifle."

The government's outreach to radical Islamist groups and individuals is not new and has been ongoing for at least the past two decades under the Clinton and Bush administrations. Some of these Islamists include groups and individuals who have been convicted, indicted or designated unindicted co-conspirators in terrorism prosecutions in the U.S.

The State Department spent $40,000 from 1992-2000 to sponsor Abdurahman Alamoudi to represent American Muslims in speaking engagements overseas. Alamoudi, a former head of the now-defunct American Muslim Council, was sentenced to 23 years in prison for illegal financial dealings with Libya. Alamoudi also confessed to being part of a Libyan plot to assassinate the then-crown prince of Saudi Arabia.

The United States Agency for International Development (USAID) provided financial aid to the Hamas-tied Holy Land Foundation. In 2000, on discovering the agency was providing aid to a terror-linked charity, Thomas R. Pickering, then-Undersecretary of State for Political Affairs, ordered termination of HLF's registration with USAID since it was found the partnership was "contrary to the national interests and foreign policy of the United States."

Islamist apologist John Esposito has been sponsored by the State Department to travel overseas and talk about life for Muslims in America to international audiences. FOIA records obtained earlier by the IPT show Esposito traveled overseas several times between 1997 and 2007 on the State Department's dime, including to Pakistan, Bosnia, and Croatia. Esposito has a track record of downplaying the threat from Islamist terrorism and has close ties to CAIR and the United Association for Studies and Research (UASR)—two Muslim Brotherhood front groups that were identified by federal prosecutors in the HLF trial as part of the Hamas-support network in the U.S. Esposito also served as a defense expert in the HLF trial and considers U.S.-based Palestinian Islamic Jihad (PIJ) operative Sami Al-Arian a close friend.

A March 2009 State Department booklet, titled "Being Muslim in America," ostensibly seeks to debunk the myth that American Muslims are marginalized and do not form part of mainstream America. But at closer glance the booklet reads more like a pro-Islamist propaganda mouthpiece giving voice to standard Islamist grievances such as growing Islamophobia and racial profiling in post-9/11 America.

More recently, the State Department sent MPAC's founder and president, Salam al-Marayati, as its emissary to a human rights forum in Poland in October. Al-Marayati earlier alleged Israel as a suspect behind the 9/11 attacks and called Hizballah attacks "legitimate resistance." This is not the first time the State Department handpicked al-Marayati as its representative, sending him on a 2010 trip to Europe where al-Marayati spoke about free speech and religious freedom.

Jasser criticized the State Department and the Obama administration for their work with "patently Islamist ideologues" such as ISNA (Islamic Society of North America), MPAC and CAIR that helps promote and provide legitimacy to such groups.

"Even though those groups have reportedly anywhere from 4-12% support of American Muslims, the USG endorsements in all its forms props up these groups more as the de facto tribal leaders of our American faith community," Jasser said in an email exchange with the Investigative Project on Terrorism.

"If the Obama administration would actually reach out to more ideologically diverse Muslims, i.e. our AILC [American Islamic Leadership Coalition], they would find that many of the lenses through which they view our communities would need to be changed. They would be forced to address the ideology of Islamism and how to understand the impact that has upon the actions of those groups."

Currently, Jasser emphasized, Islamists provide "unfettered advice [that] leads to pro-Islamist positions domestically and abroad, leading to stronger positions of influence for Islamists and less access for anti-Islamist Muslims. They falsely convince the White House that anti-Islamists are anti-Muslim when the reality could not be more pro-Muslim."