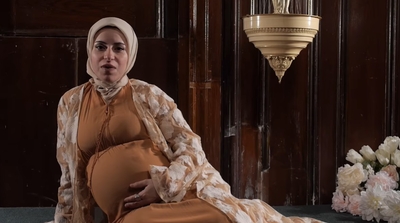 A woman sits, caressing her pregnant belly, her legs tucked up beneath her, her hair covered in a pale beige hijab. She wears dark lipstick, black eyeliner, and eye shadow; rings adorn several of her fingers. Arab music plays in the background, and she begins to rap:

Don't that make you sweat

Don't that feel too tight?

Meet Mona Haydar, a self-described "rapper, poet, activist, practitioner of Permaculture, mediator, composting devotee, mountain girl, solar power lover and tireless God enthusiast." The daughter of Syrian immigrants who was born in Saudi Arabia and raised in Flint, Mich., Haydar created her first rap video, "Wrap My Hijab," in 2017 while eight months pregnant with her second son. To date, it has attracted over 6.6 million views. Billboard has even called it "One of the top 25 Feminist Anthems."

But is it? Or is Haydar, who holds a master's degree in Christian Ethics "focusing on Empire, Colonization, White Supremacy and Ecology," and who describes Western culture as "a patriarchal, capitalist society" filled with "proxy wars, capitalist greed...a war economy, and profit on the deaths of people," in fact a propagandist for an anti-Western Islamism that is, itself, deeply patriarchal, warmongering, and oppressive? After all, while Muslims in Syria and Iraq enslave and rape Yazidi Christians, and while guardianship laws in Saudi Arabia, Afghanistan, Iran and elsewhere forbid women to leave their homes, attend school, or marry without the approval of their husbands or fathers, it is Christianity Haydar regularly points to as the force of evil and misogyny in the world.

She has said, for instance, that "my light skin is a product of rape and conquest of my people," and that "Studying Christian Ethics gave me insight into the truth that problematic Christian theology is the root of problems like white supremacy, slavery, poverty, ecocide, etc. Christianity converted the Empire and engaged in the work of colonization, slavery and conquest."

But another Syrian-American, American Islamic Forum for Democracy President M. Zuhdi Jasser, a co-founder of the Muslim Reform Movement, calls that focus a "lost opportunity." Instead, he said in a recent e-mail, Haydar could better use her platform to "wake up millennials [to] the real obstacles to reform – the Islamist establishment."

Moreover, her songs and speeches arguably are built on sheer hypocrisy – or, perhaps, a calculated effort at gaslighting her millions of fans and followers. She maintains, for instance, that despite the heavy makeup she sports in "Wrap My Hijab." the video aims to show Muslim girls "a girl ... who doesn't have a stick-thin body, who isn't wearing gobs and gobs of makeup, who is just a normal woman doing normal things in a video."

Similarly, she declares that her hijab, which she says she freely chose to wear as a young woman growing up in America's heartland – and could just as freely choose to remove – is in no way a symbol or indicator of oppression.

For her, it very well may not be: after all, the "warmongering," "patriarchal" society in which she lives, as opposed to the Islamist country of her birth, makes that possible, just as it makes possible her very career as a hip-hop artist.

Yet nowhere in her work does she appear to take joy in this freedom to wear or not wear a hijab. To the contrary, she calls the hijab a "badge of honor." To those who claim that women in hijab are "so brainwashed, buying into a religion that basically says if they don't wear [a hijab] they should be killed," she says, "Well, actually, that's a product of your own patriarchal and misogynistic values and not a representation of my faith."

This, of course, is roundly untrue. Wearing a hijab, like wearing burqas and other body-covering garments, derives entirely from the patriarchal and misogynistic culture of Islam – even if scholars and theologians continue to debate whether or not it is part of the religion itself. There is a saying in Arabic: "a man's honor rests between the legs of the woman." That is to say, a man's honor (and that of his family) is based on the sexual purity of his wives, sisters, and daughters. And when women fail to cover, their sexual purity is at risk. It is the hijab and other coverings that help to protect that purity. In fact, Muslim women can be beaten or even killed for not wearing their hijabs, which happened in the honor murders of Pakistani-Canadian Aqsa Parvez and Turkish-German Hatun Sürücü. It is not Christian misogynists who commit these killings. It is Muslim men, and sometimes even Muslim women.

Nonetheless, Haydar continues to be celebrated worldwide for her message and her songs, receiving frequent media praise for her "feminism" and her refusal to accept "liberal assimilation-focused respectability politics."

Haydar didn't always cover her hair. That decision came, she says, "the summer before seventh grade," which for her was the summer  after 9/11, a period when young Muslim women in America – Congresswoman Ilhan Omar among them – began wearing hijabs and other forms of Islamic dress. Yet more than a few coupled that covering – which, again, is meant to represent a woman's modesty, and to distract male eyes from her sexuality and beauty – with body-clinging outfits and, like both Haydar and Omar, makeup that accentuates their eyes and lips.

And in this, says Jasser, author of the book A Battle For The Soul of Islam, Haydar "is all about what could be described as 'hijabi cool.' Sadly, somewhat like the 'jihadi cool' rappers, it is an oppressive form of collectivist group-think about an aggrieved Muslim identity class that also seeks a form of Islamist revivalist triumphalism. Her flag, her national ideology, is not liberty or Americanism; it is the hijab – her Muslim-ness."

For Mona Haydar, and for so many young women like her, the purpose of their hijab is clear: it is not a pious gesture. It is a militant act.

But it's not just pro-Muslim, anti-Western rhetoric that has made her famous. Much of her message is explicitly anti-American, an echo of the kind of rhetoric we hear from Omar and many others. Speaking at the 2018 Wild Goose Festival, a "faith-based social justice community," she stated, "we live in a white supremacist world, and Christian ethics is unfortunately some of the foundation of that world. We live in the United States of America, which was constructed on the beliefs of the founding fathers who were Saxonists. And what that is, is an integral spiritual path which has to do with their ancestry as Saxons, and that's a real thing, built into the system. Until we do the work to dismantle that supremacy, we won't get anywhere, we aren't going to be able to have conversations that are healing and loving and affirming. Christian ethics is about doing the healing work of recognizing the wounds that exist..."

Moreover, she says, citing an idea pulled from Rev. Kelly Ann Douglas's Stand Your Ground, the 2012 murder of black 16-year-old Trayvon Martin by white neighborhood watch officer George Zimmerman is integrally connected to the Founding Fathers and the Roman Empire. It is all bound together through the history of the Saxon peoples, from their birth during the Roman Empire to the Anglo-Saxon founding of the United States. Understanding this, says Haydar, is necessary if we are to realize what America "truly is." 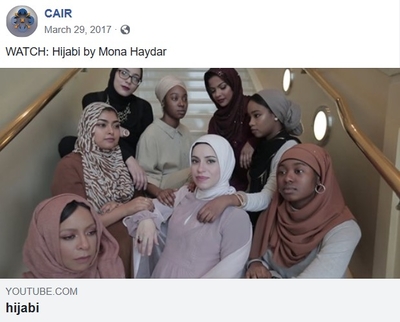 For all of this, the 31-year-old rapper has gained applause from various Islamist groups, including the Muslim Brotherhood-linked Council on American-Islamic Relations (CAIR). She recently was invited to perform by the Muslim Public Affairs Council (MPAC), an organization that, according to an Investigative Project on Terrorism report, "routinely speaks in defense of designated terrorist organizations, as well as individuals and charities that are supporters of terrorism; opposes U.S. counterterrorism measures as part of a consistent knee-jerk reaction claiming bias and discrimination behind law enforcement efforts; and reflects a blatant and conspiratorial anti-Semitism."

She has also performed for fawning millennial non-Muslim audiences, pontificating on the evils of capitalism, the abuse of "cultural appropriation," the need to resist "the cult of scientism as the only way of real knowing," and the joys of "living with the earth."

But some Muslim Americans, like Jasser, remain wary of her message and her work. Yes, Jasser acknowledges, "she may be facing and reshaping (more than actual reforming) a few issues on the periphery, [but] she is obviously simply a product of an identity politic movement, and not any palpable ideological revolution of freedom against Islamist theocrats ... She leaves behind Muslims who do not see themselves as victims, but rather as Americans first who happen to be Muslim, and cherish the Universal Declaration of Human Rights."

Will she ever sing for them?