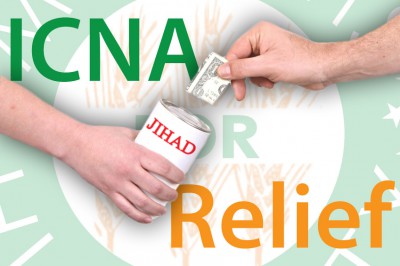 The charitable wing of a major American Muslim organization is promoting donations to extremist causes, undercutting a nationwide campaign to improve its image. The website link from the Islamic Circle of North America (ICNA) Relief division hints at deeper connections to extremism and terror, both by the charitable branch and by its parent organization.

ICNA's self-proclaimed goal is "to communicate the message of Islam to the society at large" and "also to initiate change in the social and political spheres [of American society] in light of the principles of the noble Qur'an," according to the group's 2020 Vision program.

"The future of Dawah [proselytizing] in this society is directly linked with the ability of ICNA's membership to communicate the message of Islam to the society at large," it explains. Over time, the group encourages "moving to the next level of Dawah, aimed towards the movers and shakers of the society."

As that program outlines, that goal means more engagement with non-Muslims to promote Islam. ICNA is in the midst of a pro-Sharia campaign, which explains that Islamic law isn't something threatening to American society or order.

A long history of extremism stands in the way. ICNA's magazine, conferences, and ideology have promoted violent jihad and supremacy rhetoric for decades, and continue to emphasize Islam as a civilization alternative to secular society.

The group's 2010 Member's Hand Book illustrated how further acceptance of Islam would lead to an Islamic state in America and then to a global Caliphate. "With this work of propagation of Islam, social reform, and the truth is introduced to a large part of the society. A good part of the society's thinking individuals join the movement. Then it may move to establish an Islamic society, obedient to Allah's commands," the hand book states.

To change beliefs about Islam and to further ICNA's role in promoting it, the 2020 plan emphasizes social justice and charity issues. But the discovery of more extremist content on ICNA Relief's website shows that although the group has initiated a new public image, an ideology of extremism prevails just under the surface.

The charity website links to a chapter about the giving of zakat, obligatory tithing, from Let Us Be Muslim, a text by Islamist preacher Abu Ala Maududi. He was the founder of Jamaat-e-Islami, a South Asian extremist organization that advocates the overthrow of secular governments and their replacement with a worldwide Islamic state.

The section from Let Us Be Muslim, a fundamental text used in many of ICNA's education curricula teaching extremism, promotes giving "Fi-Sabili'llah: in the way of Allah." Maududi defines this in the chapter as "giving help to a struggle for making Islam supreme on earth."

In addition, the terminology of "making Islam supreme" is a constant theme throughout ICNA's indoctrination programs. A 2008 presentation on the ICNA Southern California website explains the "goal of the Islamic Call" as the "extermination of pre-Islamic traditions or Jahaliya [ignorant ways of life]" and "mak[ing] Islam the predominant way of life" on earth.

The link on ICNA Relief's page promotes these sentiments even further, explaining that charity should be spent to further violent causes.

"Thus, we are told, there are two ways we can lead our lives. One is the way of God... To walk on this path, you must generously help your brothers and support Jihad out of whatever resources God in His bounty and wisdom has given you," Maududi wrote in the section ICNA Relief links readers. "The other is the Satanic way: apparently full of benefits, but in reality it leads to ruin. The hallmark of this way of life is worshipping money and amassing wealth at the expense of all other considerations."

Theological justifications for supporting militancy aren't new to ICNA or ICNA Relief. Currently, ICNA members proceed through a two-tiered system of membership, which requires an ideological commitment to the philosophy of political Islamism, as envisioned by thinkers like Maududi.

One leader, ICNA New York President Ashrafuz Zaman Khan, is alleged to have carried out war crimes in the name of Maududi's violent pan-Islamist ideology.

Open support for terrorist causes was available on the websites of regional ICNA branches, even after 9/11. As late as November 2002, the ICNA Southeast Zone website linked to the websites of Hamas, Hizballah, and terrorist organizations fighting in Chechnya, Afghanistan, and the Pakistani-Indian disputed region of Kashmir. Among its short list of recommended Islamic charities was the Islamic Society in Gaza, which openly touted its connections to Hamas.

The group's magazines and conferences similarly promote connections to violent jihad and terrorist organizations going back dozens of years.

An article in the October 1995 edition of ICNA's The Message Magazine features an interview with ICNA Relief director Tariqur Rehman about the crisis in Bosnia. Rehman describes how he "witnessed first hand" the religious progress of Bosnian army and mujahideen, and notes how they needed "weapons, heavy weapons." Although the United States fought against the Serbian genocide of the Bosnians, it cracked down on Islamic charity Benevolence International Foundation for supplying Islamist warriors fighting there. Al-Qaida-linked mujahideen used Bosnia as a training base, exporting fighters who would take bring jihad back to their home countries, including battling in Iraq against American forces.

An October 1997 article in the magazine, "Kashmiri Commander Speaks," features an exclusive interview with Salahuddin Ahmed, supreme commander of terrorist organization Hizbul Mujahideen and chairman of the United Jihad Council. Ahmed's terrorist coalition at the time included groups like 2001-terror-designees Lashkar-e-Taiba and Harakat al-Ansar, which was proscribed the same month as the article.

In "Kashmiri Commander Speaks," Salahuddin advocates on behalf of the jihad in Kashmir and discusses the role American Muslims can play. "The Kashmiris need concrete military and material support, and also the support of the Muslim Ummah, especially, on diplomatic and political levels," he says. He also quotes a Quranic verse when asked if he has "any message from the Muslims in America."

"Our message for the brothers in America and the outside world is in terms of the Holy Qur'an: 'And why should ye not fight in the cause of Allah and of those who being weak are ill-treated (and oppressed)?" he quotes.

In the same issue, writer Lena Winfrey Sayyed writes of the importance of fighting Jews in Israel and of supporting violent jihad in a more general way.

"One of the duties a Muslim is given by Allah is to make jihad (struggle). It can mean armed combat, but this may not be possible for everyone," Sayyed says. "Other acts are considered jihad. For example, a hadith [saying of the prophet Muhammad] states that one who supports a fighter with weapons or other means gets the same reward as the one fighting."

The same sentiments have been expressed in conferences and rallies. At its 2001 annual conference, then-ICNA President Zulfiqar Ali Shah led the audience in an Arabic chant of "Our way, our way, is jihad, jihad."

He explained his remarks to the conference as referring to violent jihad and a duty to support Muslims at war. "Whether they are brothers in Palestine or Kashmir, they belong to the Muslim ummah and we are united with them in their struggle," he said. "We stand for them and we are for their support and for the victory in Muslim [sic - Islam]. Let's give a big takbir [elevation of Allah's name] for our mujahideen brothers and sisters in Kashmir."

In earlier years, terrorist leaders and extremists were given platforms at ICNA conferences. Senior Hamas member Muhammad Siyam addressed the audience during the 1990 conference together with the deputy head of Jamaat-e-Islami Pakistan, Khurshid Ahmed.

When ICNA talks of charitable contributions and social justice, it is promoting a message tailored to a Western audience, not to its own membership. This new ICNA Relief link, with the organization's decades of radical education and rhetoric, show that ICNA's leadership still believes in supporting jihad and pursuing Islamic supremacy.