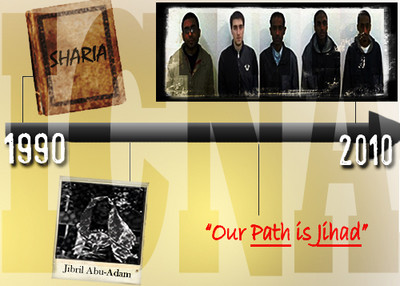 When five young Americans disappeared from the greater D.C. area last November, only to be arrested a week later in Pakistan where they allegedly sought to join the jihad against Americans, people wondered why.

Why would five young men forfeit lives of comfort and opportunity to try to kill soldiers defending the nation that made all that possible? How could reportedly supportive families generate radical Islamists like Ramy Zamzam? Emerging from court in January, he declared, "We are not terrorists. We are jihadists, and jihad is not terrorism."

Much of the initial focus was drawn to the Islamic Circle of North America (ICNA), the organization to which all five young men belonged. This dissipated following assurances from ICNA and its local chapter that it had not engaged in any form of radicalization and, in fact, would launch programs to combat it:

"Extremism has no place in Islam, and ICNA works tirelessly to oppose extremist and violent ideology."

The local youth director Mustafa Abu Maryam, who had worked with Zamzam in leading fundraising for the new mosque in Virginia, pointedly declared:

However, the recommended reading list for ICNA's youth organization for boys, called "Young Muslims," shows the opposite. The book list includes numerous works by authors such as the Muslim Brotherhood founder Hasan Al-Banna, current spiritual leader Yusuf Al-Qaradawi, and Jamaat-e-Islami founder Abul 'Ala Maududi. These works are not countered by books or essays which offer a more passive, peaceful message.

The Muslim Brotherhood is the world's largest Islamist group, and its motto is, "Allah is our objective. The Prophet is our leader. The Qur'an is our law. Jihad is our way. Dying in the way of Allah is our highest hope."

Jamaat-e-Islami is the Indian subcontinent's equivalent of the Muslim Brotherhood. Maududi advocated worldwide overthrow of all non-Muslim regimes, such as this example from his book, Jihad Fi Sabillilah [Jihad in the way of Allah], which is not part of the Young Muslims reading list, shows:

"It must now be obvious that the objective of the Islamic jihad is to eliminate the rule of an un-Islamic system, and establish in its place an Islamic system of state rule. Islam does not intend to confine his rule to a single state or a hand full of countries. The aim of Islam is to bring about a universal revolution. Although in the initial stages, it is incumbent upon members of the party of Islam to carry out a revolution in the state system of the countries to which they belong; their ultimate objective is none other than world revolution."

More recently, the Jamaat has expressed support for violent jihad against American forces and other non-Muslims in Iraq, Afghanistan, Palestine and elsewhere. The organization also salutes the jihad of groups like Hamas, Hizballah, and Hizbul Mujahideen in Kashmir.

Similarly, Qaradawi's Priorities of the Islamic Movement in the Coming Phase, contained in its entirety on the Young Muslims website, includes a call for supporting violent Jihad movements around the world:

"This is why the faqihs of Islam have agreed that it is a duty to defend every land invaded by infidels, stating that such jihad is imperative for Muslims in this land as an individual obligation and that all Muslims must support them with money, arms and men as required until all their land has been liberated from any aggressor who usurps it."

Qaradawi goes on to encourage participating in jihad movements in Kashmir, Somalia, the Philippines, Sudan, and declares that, "The Islamic Movement should consider itself at the beck and call of every Islamic cause, responding to every cry for help wherever that cry may come from."

Other books appearing on the website, like Maududi's Towards Understanding Islam, reinforce the need for violence. In this book, Maududi considers jihad a part of worship:

"Jihad is a part of this overall defense of Islam. Jihad means struggle to the utmost of one's capacity. A man who exerts himself physically or mentally or spends his wealth in the way of Allah is indeed engaged in Jihad. But in the language of the Shari'ah [Islamic law] this word is used particularly for the war that is waged solely in the name of Allah and against those who perpetrate oppression as enemies of Islam. This supreme sacrifice of lives devolves on all Muslims… In all these cases Jihad is as much a primary duty of the Muslims concerned, as are the daily prayers or fasting. One who shirks it is a sinner. He is plainly a hypocrite who fails in the test of sincerity and all his 'Ibadat and prayers are a sham a worthless hollow show of devotion."

Dr. Zuhdi Jasser, founder of the anti-Islamist American Islamic Forum for Democracy, said books such as these form "a theo-political ideology that is the gateway drug toward violent Islamism for susceptible Muslims."

Groups like ICNA do not promote Islam, but rather Islamism, the linking of politics and religion, Jasser said. "Islamism and its efforts at youth indoctrination is a separatist movement which overwhelms youth in the guise of religion - Islam."

ICNA, by promoting this literature, encourages this philosophy. It is not the first time.

In 1997, ICNA's The Message [International] honored Jibril Abu Adam, a young man killed fighting in a Jihad in circumstances that greatly resembled the attempts of the 5 men currently held in Pakistan. The article, entitled "Actions Speak Louder than Words," celebrated the radicalization and eventual death of the young American convert who fought in Kashmir. Aside from noting that "it is quite evident that Jibril's struggles were motivated by devotion to Allah," the article began by stating:

"The Qur'an urges Muslims to seek knowledge and then to act on the knowledge they acquire. It also says that the person who merely obtains knowledge without taking actions is like a donkey carrying books, i.e., such knowledge becomes a burden that benefits no one. For one young man, knowledge became a source of inspiration that led him to take actions that can benefit everyone."

When Jibril was "questioned about the perils of Jihad," he asserted that a shaheed (martyr) is the best, and I want to be the best," the article said. On November 29th, 1997, at ICNA's Southeastern Regional Convention in Atlanta, a plaque was presented to Jibril's family in celebration of his martyrdom. The plaque read:

"Think not of those who are killed in Allah's Cause as dead. Nay they are alive with their Lord and have their provision (Qur'an 3:169). In recognition of Jibril Abu-Adam (also known as Lawrence Nicolas Thomas) for his devotion to His Creator and his ultimate sacrifice on behalf of his fellow Muslims in Kashmir."

Similar incitement can be found in dozens of ICNA publications, conferences, and rallies. An October 1993 issue of The Message was called, "The Engines of Hate," and expressed virulent anti-Semitism for the supposed Jewish role in manufacturing bias against Muslims. Among other examples of hate speech, it noted the "Jewish domination in the two Houses of [the] US Congress" because of their "money and power." It also issued an ominous warning to Jews that their "manipulating power in the US" was "far greater than in Germany in the 1920s and 1930s," and that they "may be digging their own graves." Another article from August 1999, "ICNA: A Successful Journey And A Promising Road Ahead," written by then- ICNA president Zaheer Uddin, declared:

"Islam is a movement. There is no status quo and passive attitude in Islamic movement. If we want to keep our identity as Muslims; if we want to train our next generation as practicing Muslims; if we want to propagate and establish Islam in this society, we have to be dynamic and smart Daees [missionaries]… Future is very bright for Islam in America. Let us say [the] future of America is Islam, Insha Allah… Come and become part and parcel of Islamic movement – Islamic Circle of North America, and join hands to achieve the goal of establishing Islam in this world and having the pleasure of Allah in the life hereafter."

At a rally prior to the July 2001 conference, then- President of ICNA Zulfiqar Ali Shah led chants of, "our path is jihad," and stated:

"Whether they are brothers in Palestine or Kashmir, they belong to the Muslim ummah and we are united with them in their struggle. We stand for them and we are for their support and for the victory in Muslim [sic]. Let's give a big takbir for our mujahideen brothers and sisters in Kashmir."

The conflict between ICNA's message to youth and it declarations of innocence is palatable, Jasser said:

"This organization [ICNA] is teaching Islamism as a dominant political movement ...Basically this theo-political ideology is the gateway drug toward violent Islamism for susceptible Muslims. Those who are not susceptible Muslims are still part of a separatist movement which is not commensurate with our Constitution and Bill of Rights."

While it is unclear how the five young Americans arrested in Pakistan were radicalized, it is clear that ICNA's recommended reading for young Muslims instills little confidence in its commitment to fighting radical ideology.