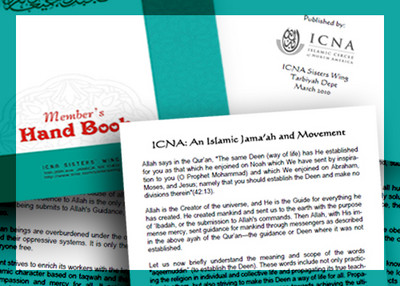 The Islamic Circle of North America (ICNA) is preaching a global Caliphate and Islamic Shari'a law over America to its members, according to the 2010 ICNA Member's Hand Book. This is a very different message than the group's public outreach efforts, and contradicts claims that the organization is a tolerant, mainstream Islamic group.

As the hand book spells out, the organization's ultimate goal is "the Establishment of Islam" as the sole basis of global society and governance. It also encourages members to deceive people in its proselytizing campaign to help fulfill this goal. This aim is one that ICNA has been actively pursuing as the group has set its sights on America's constitutional separation of religion and state.

It's not the first example of radicalism by one of America's largest Muslim organizations. ICNA's magazine has featured interviews with terrorist leaders in Pakistan, called on youth to fight abroad in Kashmir, and honored like-minded extremist organizations like the Muslim Brotherhood and South Asia's Jamaat-e-Islami. Concerns have also been expressed about 5 young members of the group's Virginia mosque, who were arrested and convicted on terrorism charges after attempting to link up with and fight for Pakistani terror groups in December 2009.

As the hand book explains, ICNA doesn't just believe that religion is a private affair. "Establishment of the Religion" extends beyond the individual and family and into the society, state, and world. "These words [Establishment of the Religion] include not only practicing the religion in individual and collective life and propagating its true teaching to others, but also striving to make this Deen [religion] a way of life for all," the hand book reads.

ICNA's charter is even more explicit. It calls for the "establishment of the Islamic system of life" in the world, "whether it pertains to beliefs, rituals and morals or to economic, social or political spheres."

For ICNA, this means being the American branch of a global phenomenon that they refer to as the 'Islamic Movement.' The 2010 Hand Book notes, branches of this movement "are active in various parts of the world to achieve the same objectives. It is our obligation as Muslims to engage in the same noble cause here in North America."

Working in an 'Islamic Movement' culminates in an Islamic super-state, the Caliphate, the hand book says. Believers have an obligation to strive to reestablish a collective body of Muslims worldwide, organized into the super-state under the direction of a Caliphate and Islamic law. The group wants "the united Muslim Ummah [community] in a united Islamic state, governed by an elected khalifah in accordance with the laws of shari'ah."

While these ideas may have been popularized decades before by the Muslim Brotherhood and South Asian radicals in Jamaat-e-Islami, ICNA is emphasizing them today in its education and membership.

The group also realizes that achieving its aim is a slow process and involves several stages. In a section called, "Levels of work by the Islamic Movement," ICNA lists five stages to attain a global Caliphate. The group advocates spreading its view of Islam to Muslims and non-Muslims alike, starting with the individual and family, and then implementing the "Establishment of the Religion" in the society, state, and global level.

In the early stages, members pass through the "Tarbiyah Process," an education consisting of radical literature promoting Islam in place of Western systems at later stages in the Islamic Movement. For example, the group advocates that members read Fathi Yakin's To Be A Muslim, a book which declares that "true commitment requires every Muslim to dedicate his or her life in a jihad to establish and maintain a system of Islamic governance." Likewise, the book pits Muslims against non-Muslims, by declaring all non-Islamic political and social systems to be contrary to Islam. As Yakin declares, "The adoption and adaptation of capitalist, socialist, communist or other manmade systems, either in whole or in part, constitutes a denial of Islam and disbelief in Allah the Lord of the worlds."

At the "Societal Level," ICNA advocates Islamist solutions to society's problems while providing social services and proselytizing to non-Muslims. Often, this is done in a deceptive way, such as through the organization's WhyIslam branch. On one hand, the hand book openly states that "WhyIslam is a subdivision of the Dawah [proselytizing] Department" that "works to promote Islam among non-Muslims." However, the document instructs ICNA members to state a different mission by WhyIslam to non-Muslims, one that wants to "build a bridge of understanding between Muslims and Non-Muslims" and "to educate the American public with accurate information of Islam."

In the next stage, called the "State Level," Islam gains traction in a larger segment of society" and "a good part of the society's thinking individuals join the movement. Then it may move to establish an Islamic society, obedient to Allah's commands."

The struggle then reaches the "Global Level" with worldwide ambitions. "Wherever the Islamic movement succeeds to establish true Islamic society, they will form coalitions and alliances. This will lead to the unity of the Ummah [Muslim nation] and towards the establishment of a Khilafah [Caliphate]," the book says in the section, "Levels of work by the Islamic Movement."

While this may seem like a farfetched concept of world domination, it is actually the same philosophy embodied by the group that ICNA admits founded it. Jamaat-e-Islami [JI], a radical South Asian group committed to the same purposes of a regional and then global Caliphate, promotes an identical message of Islamist domination of society, government, economics, and culture. ICNA maintains its connection to the group with a senior member of the JI from India, Yusuf Islahi, teaching in the organization's headquarters. Likewise, the 2010 hand book and other membership reading lists repeatedly emphasize the radical literature of JI's founder, Sayyid Abul 'Ala Maududi.

Maududi's books, like Let Us Be Muslims, are regular features in the group's education about replacing secular governments with Islamic ones. "Briefly speaking, it would be enough to state that the real objective of Islam is to remove the lordship of man over man and to establish the kingdom of God on Earth," declares Maududi in Let Us Be Muslims. He goes on to promote destroying non-Islamic governments, stating, "the duty devolves on you that wherever you are, in whichever country you live, you must … snatch away the power of legislation and lordship from those who do not fear God and are unbridled. And then taking over the leadership and superintendence of God's servants, conduct the affairs of the government in accordance with God's laws."

In Witness Unto Mankind, another book on ICNA's reading list, Maududi discusses how Islam will bring about the destruction of Western political and social systems. With the rise of Islamic political power, "secularism will lose all credibility and authority. Their philosophy and world-view, their economic and political ideologies, will prove fake and spurious when confronted by your truth and right conduct," he states. "The forces that today belong to the secular camp will, one by one, break away and join the camp of Islam. A time will, then, come when communism will live in fear of its very survival in Moscow itself, when capitalist democracy will shudder at the thought of defending itself even in Washington and New York, when materialist secularism will be unable to find a place even in the universities of London and Paris, when racialism and nationalism will not win even one devotee even among the Brahmans and Germans."

This militancy has led countries like Bangladesh to ban all of Maududi's books and arrest leading JI members. Pakistan has followed suit, arresting other JI leaders in anti-militancy operations. India has also banned the Students Islamic Movement of India (SIMI), the former student branch of JI in that country, for its connection to al-Qaida and domestic terrorist operations.

ICNA's message in 2010 reinforces its long-held belief in spreading Islamist ideals, which it believes will culminate in a Caliphate. While its benevolent face preaches social justice and charity work, the goals it espouses to members tell a very different story.

I have a hard time accepting that the "Prophet" Muhammed was a prophet of peace when in reading up on the history of Islam it paints a very different picture. My religion teaches us to love thy neighbors as you would yourself, the Koran teaches to kill all infidels who do not believe in Islam. Whereas my religion is peaceful yours is violent and has a desire to kill based on the book in which you believe. No Thanks! We don't need Sharia Law in America. If you desire to have Sharia Law then move back to your own country and stop trying to shove your religion down peoples throats who do not want it here! Sharia has no room in the USA. Our Religion and Constitution is what we live by and I suggest you incorporate your lifestyle to abide by our Constitution and our laws.

We do not know and do not care what ICNA is going to do in the future, but we do know that a Christian pilot killed 150 innocents, and we also know that another Christian sprayed on two airport security force member and ran after another to kill her.

You are talking about ICNA while forgetting Christian are terrorizing others, you are keeping a blind eye fooling no one but yourself.

Each one of you posters who claim this article has no basis are very naive. I suggest you do a study of the history of Islam, and then reread the article, and you will certainly see it in a different light. The Islamist have one goal...to impose Islam in every single country of the world. Read the Koran. Study it. It is your enemy even if you don't practice a religion. Even if you don't believe in God.

"Atheists strive to spread the word and their ultimate goal is to see a world without God."

I have read the handbook, which is directed at women. It provides detailed, specific instructions and recommendations for spreading the faith and nourishing one's own. The list of recommended reading is straight out of Muslim Brotherhood type Islam, with authors like Hassan al-Banna, Ala Maududi, al-Tantawi, ibn Tamiyya, Yusuf al Qaradawi, Shamim Siddiqi, and In the Shade of the Koran (which I believe Said Qutb wrote), and the recruitment/retainment strategy seems cultic with its strict organization, buddy systems, and indoctrination sessions. I think there is cause for concern for our secular society should this sort of organized religious activity become widespread. This goes for religious organization of fundamentalist Christians, too, who are no friends of church-state separation.

Thank you for providing this information.