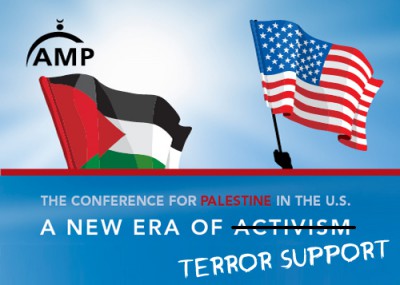 Muslims convicted in America of supporting terrorist groups are heroes and the victims of injustice, a national convention of Palestinian activists was told. In addition, speakers said the fight for a Palestinian state will center on American college campuses.

Last year's AMP's conference revealed the organization's goal to delegitimize the State of Israel in America. This year's conference reinforced that message, while taking it a step further.

At the opening ceremony, Jamal Said, an imam at the Mosque Foundation in Chicago (Bridgeview Mosque) hailed "the activists and freedom fighters who gave up their personal ambitions and their own lives so our cause may live."

Said was listed as an unindicted co-conspirator in the Holy Land Foundation (HLF) Hamas financing trial. The U.S. Treasury froze HLF assets in 2001 after concluding its money went to Hamas. Last week, a federal appeals court upheld the conviction of five HLF officials in November 2008 who had been accused of illegally routing more than $12 million to Hamas.

During a session held in Arabic, Archbishop Atallah Hanna of the Greek Orthodox Patriarchate of Jerusalem supported Palestinians imprisoned by Israel for conducting acts of terrorism:

Hanna, an Israeli citizen, ended his speech assuring the audience, "We in Palestine, Christians and Muslims, stand in one trench to confront the Occupation… This Occupation will vanish. Palestine will be liberated and will return to its owners."

Other speakers attacked the designation of terrorist groups by the United States.

Congress does not designate terrorist groups or individual terrorists. Statutes empower both the U.S. State Department and the Treasury Department to do so.

Atta is a frequent speaker at AMP events. Some of the members of the Islamic Center in Milwaukee were "involved in raising money in the name" of HLF "that is actually for Hamas," according to a November 2001 FBI memo.

During the same session Rafeeq Jaber, a founding board member of the Council on American-Islamic Relations (CAIR), argued that there are risks involved in "working for Palestine." Jaber then defended convicted terrorists, "So the risks are imprisonment, which is that we talked about here, the HLF, Sami Al-Arian, Dr. Ashqar, Muhammad Salah, and the list goes on and on and on for those people who worked here in the United States. And they suffer."

Sami Al-Arian, a former University of South Florida professor, pled guilty in 2006 to providing goods and services to the terrorist organization Palestinian Islamic Jihad. Abdelhaleem Ashqar has been accused of racketeering for his alleged support for Hamas. He was acquitted by a jury on these charges in February 2007, but was sentenced to 11 years in prison for criminal contempt and obstruction of justice after refusing to testify before a federal grand jury investigating Hamas support in the United States. Co-conspirator Muhammad Salah was a member of Hamas and indicted for providing material support and resources to Hamas. In July 2007 he was sentenced to 21 months in prison.

Jaber's defense of terrorists is not surprising given his own support for Hamas. Jaber served as the president of the Islamic Association of Palestine (IAP) from 1996-1998 and from 1999 until the organization shut down in 2005. IAP served as the primary voice of Hamas in the United States. Court documents show both IAP and HLF were created by the "Palestine Committee" in America, which was established by the Muslim Brotherhood to "support Hamas from abroad." HLF acted as "the fundraising arm for Hamas," and IAP served as a "media entity."

The audience also heard from Sarah Mufid Abdulqader, the daughter of one of the convicted HLF members, Mufid Abdulqader. Her father "traveled around the country on HLF's behalf to speak and raise funds," according to court documents.

"It's an honor to have a father that was put in jail," Sarah Abdulqader said, and she asked Allah "to free all political prisoners of Palestine in Palestine and in the United States."

AMP's board includes at least two members with ties to HLF. Salah Sarsour has helped raise money for Hamas and formerly worked for the IAP, law enforcement documents show. AMP's Osama Abu Irshaid was an editor of Al-Zaytounah, an Arabic newspaper that was published by IAP.

The Investigative Project on Terrorism previously exposed AMP's support for Students for Justice in Palestine (SJP), an anti-Israel campus group that is growing at universities across the country. That support was highlighted during the conference.

Taher Herzallah, the national campus coordinator of AMP and a member of the University of California, Riverside SJP, shared his experiences as a convicted "Irvine 11" student during the conference session "Criminalizing Palestine in the United States." Ten pro-Palestinian students were convicted in September on charges relating to an organized series of disruptions during a February 2010 speech by Israeli Ambassador Michael Oren at the University of California, Irvine. "Every time they make a move, we become more determined enemies," Herzallah said.

"The universities – it's gonna be the front line moving forward, the front line. Why? Because this is the next generation," AMP Executive Director Hatem Bazian told the audience during a session on activism.

During the same session, a student from the University of Chicago's SJP praised AMP for its unyielding support. "They don't just fund us, you know money doesn't mean much in reality; it's the support," Sami Kishawi told the audience. "They're willing to give us an entire segment of their conference."

Munjed Ahmad, AMP vice chairman added "Why AMP? Because AMP is the, and I stress the, means to the end, the mean to the end. The end is that we will all be in Palestine, a free Palestine, in Masjid Al-Aqsa, remembering the days when we had to fight to be in Masjid Al-Aqsa, and we will be free there. That's the end." The Al-Aqsa mosque in Jerusalem is built upon the Jewish Temple Mount. While Muslims have full freedom to worship at the mosque except for occasional security issues, Islamists still use it as a rallying cry against Israel.

And, "AMP," Ahmad claimed, "is the only organization in the United States that has decided to take this challenge under the banner of Islam."

Perhaps that's true today. But in doing so, AMP follows in the footsteps of the groups linked to terrorism that it defended during the conference. IAP, HLF and even Al-Arian's organization were all shown to be carrying "the banner of Islam" in their quest to replace Israel with a Palestinian state.

We work hard for our money