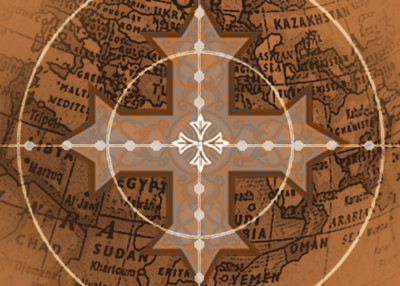 Church bombings kill scores in Iraq, Nigeria and Egypt. Iran rounds up dozens of Christians for allegedly being "hard-liners" who threaten the Islamic republic. An Egyptian police officer opens fire on a crowded train, targeting only the Christian passengers.

For a region that boasts of accommodating its Christian minorities, officials seem at a loss to stem the surge in violence.

While many Muslims took to Coptic churches to serve as human shields as a sign of solidarity, the Egyptian government reacted defensively to Pope Benedict's call for more "effective measures" to protect Christian minorities in the region. It recalled its ambassador to the Vatican. "Egypt will not allow any non-Egyptian party to intervene in our internal affairs under any pretext," an Egyptian Foreign Ministry spokesman said.

Officials have tried to cast the train shooting, which killed a 71-year-old Coptic Christian man and wounded four other Copts, as the actions of a disturbed individual and not motivated by religion. "It has to do with his personal mental state," the local governor said. "It had nothing to do with the religion of his victims. He boarded the train suddenly and emptied his pistol."

But a witness claims that the gunman screamed "Allahu Akhbar" as he opened fire, and that he targeted women who were not wearing head coverings and were likely to be non Muslims.

U.S. government officials aren't saying much about what is causing the violence.

"I'd be very wary at this point about making any sweeping statements about whether what's happened in Iraq has a bearing on what's happening in other countries such as Egypt or Nigeria," State Department spokesman P.J. Crowley said Jan. 4. "These are all being investigated. Clearly, there are pressures on minority groups in these countries, and we would hope and expect that in – those respective governments will fully investigate these attacks and bring those responsible to justice."

Several factors may be at play, said Nina Shea, a commissioner on the U.S. Commission on International Religious Freedom. Part of it is perception. Christians have been oppressed in many Muslim countries for years, driving many to move to other parts of the world. But they continue to present "soft targets" for terrorists because they are associated more with the West, with the U.S. and with Jews, she said in an interview.

What is shared by the terrorists waging attacks and the government officials leading a crackdown on Christians is "the ideological belief on the part of these Islamic extremist that they are purifying the region," Shea said.

"It's a frightening phenomenon because it's just so violent," she said.

Shea is scheduled to testify Thursday before the Tom Lantos Human Rights Commission, which is a part of the U.S. House Committee on Foreign Affairs.

Radical ideas promoted for years by Saudi Arabia and Iran is another factor, she said. They have penetrated Islamist thinking and are being taken up by extremists. Those ideologies are inherently supremacist and see Christians as either inferior or as a threat. In Egypt, some accept conspiracy theories that Copts are scheming to take over the country.

Finally, al-Qaida and its franchises are issuing threats specifically against Christians. Bomb-making instructions are available online and in al-Qaida's magazine Inspire. One al-Qaida-related group published a list of 50 Coptic churches last month, including the Alexandria church where a New Year's Eve attack claimed 21 lives.

Other than Nigeria, government reaction to the assault on Christians has been one of denial. Egypt's ambassador to the Vatican, Lamia Aly Mekhemar, told an interviewer that Christians are not being persecuted. "Persecution is a big word," she said. "In order to prove that there is persecution, you have to be very careful. This is a legal term which should not be used casually. In this sense, we do not share the views about - that our government or some governments in the area have not provided protection for the Christians in the Middle East."

Iran's ambassador to Lebanon condemned the physical attacks, but like other Islamists, blamed them on Jews. Ghazanfar Rokn-Abadi claimed his country can serve as a model for treating the religious minority.

"Some 250,000 Christians are living in Iran peacefully and safely," he said. "They enjoy full citizenship, human and political rights the same as Muslims."

National Public Radio called the recent wave of arrests in Iran "among the biggest and most coordinated." It may be fueled by concerns that Christians, who represent less than 2 percent of the Iranian population, gather to worship in private homes rather than in churches, are trying to convert Iranians. Tehran's governor described them as missionaries who have "inserted themselves into Islam like a parasite" and hinted they have ties with Britain.

Ironically, Western pressure may be the only way to stem the tide, said Walid Phares, director of the Future Terrorism Project at the Foundation for the Defense of Democracies. In Egypt, the bombing attack and train shooting show that the "jihadists are omnipresent across the country," he said during an appearance on Fox News.

An international effort led by the U.S. to pressure the government to do more to protect Christians would have an effect. "And the Egyptian government must respond. They are a recipient of our foreign aid," Phares said. "And they are, along with others, members of the Organization of the Islamic Conference, which intervened in other countries to protect Muslim minorities. So they should be fair on this one."

Save Christians in Egypt

Together to stop the persecution coptic christians in Egypt .