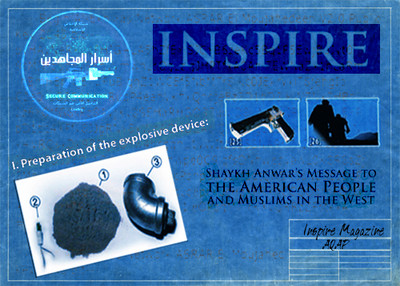 Perhaps due to its impressive presentation, media outlets may be making a conscious decision to limit access to the first issue of Inspire. Stories describe its content but do not actually show the magazine. The Investigative Project on Terorrism reviewed a copy posted on the website Scribd, but it is no longer available. Now, the link leads to this message:

"This document has been removed from Scribd."

It offers, in explicit detail, a blueprint for planning and executing terrorist attacks while avoiding the watchful eye of the government. From ideology to execution, Inspire presents a total package for a would-be bomber.

This is the latest strategic move by AQAP, which has risen to prominence since embracing American-born preacher Anwar al-Awlaki. Awlaki's speeches have played a major role in worldwide terror plots among non-Arabic speaking terrorists. These have included more than a dozen plots in Canada and America, England and Europe and even as far afield as Singapore. Inspire is the first written publication directly from Al-Qaida advocating Islamist terrorism for English-speaking consumers, with a glossy and easily readable text.

Inspire makes no effort at subtlety, as shown in the opening of a how-to piece on building a homemade bomb. The article, entitled, 'Make a bomb in the kitchen of your Mom,' poses this scenario:

"Can I make an effective bomb that causes damage to the enemy from ingredients available in any kitchen in the world? The answer is yes."

The piece augments its precise written instructions with color pictures and a clear, sequential format. The article describes making a bomb whose "ingredients are readily available" and promises that "buying these ingredients does not raise suspicion." It also states that the bomb is "easily disposed of if the enemy searches your home. Sniffing dogs are not trained to recognize them as bomb making ingredients." Likewise the lethality of the bomb, which includes specific instructions about the choice of shrapnel, promises to create a bomb that "in one of two days… could be ready to kill at least ten people. In a month you may make a bigger and more lethal bomb that could kill tens of people."

Another article, "How to use Asrar al-Mujahideen," explains how to send and receive messages via a terrorist-developed, encrypted email service. Beyond the skill training offered in the magazine, this shows how technically sophisticated Al-Qaeda has become, with the ability to build an encryption program with strong security features. The article also explains in easy language how to use proxy servers and alternative email addresses.

It's all part of AQAP's focus on "Open Source Jihad." As the organization states Inspire is:

"A resource manual for those who loathe tyrants… a disaster for the repressive imperialistic nations: the open source jihad is America's worst nightmare."

The publication also presents a unique picture of Al-Qaida, including articles on contemporary topics for an informed reader. While much of the fiercely ideological rhetoric is to be expected from AQAP, an article supposedly authored by Usamah bin Ladin cites Noam Chomsky and global warming. It concludes that spiritual corruption and environmental devastation are linked, so destroying the American economy will end pollution that affects the globe. Yahya Ibrahim's piece, "The West should ban the Niqab covering its Real Face," ties together France's banning of the face covering, assaults on Muhammad, and the Swiss outlawing of minarets. Linking up with popular grievances, the author turns to war on the West and states, "one should only expect the West to remain a field of operation for the mujahideen… There is no reason to believe that such attacks would abate."

The timing of the magazine's release is consistent with AQAP's shifting strategy, one that places a much greater emphasis on lone wolf bombers and broadening its focus toward attacking the West.

By publishing a magazine that includes detailed, English-language instructions in an easily comprehensible form, AQAP seems to be trying to give American jihadists a guide to which they can refer for both ideological reinforcement and valuable technical expertise.

In this manner, AQAP has theoretically eliminated the need for aspiring militants to travel to the Muslim world for training. To travel to Pakistan and other parts of the Islamic world in which terrorist groups operate freely is to risk detection. The independent jihadist who can assemble an effective bomb, without attracting attention by purchasing hazardous materials and/or attending a terrorist training camp, leaves a considerably smaller 'paper trail' to track. Inspire magazine is the manual to complete Al-Qaeda's new theory. These facts were not lost on the magazine's authors, who note:

…it [the magazine] allows Muslims to train at home instead of risking a dangerous travel abroad: Look no further, the open source jihad is now at hands reach." [Emphasis original]

Homegrown terrorists have tried to offer online instruction guides before. But none had the reach or sophistication evident in Inspire. Awlaki's charismatic preaching already helped fuel attacks launched by Nidal Hasan at Fort Hood, Faisal Shahzad in Times Square, and Umar Farouq Abdulmutallab in the skies over Detroit.

"I think what they're hoping with this particular journal is to build on that message," Zarata said, "to build on that momentum to try to attract as many people to take up the violent cause and to commit some act of violence in the U.S. and in the West."