CAIR – Suspected and Supported by the Federal Government 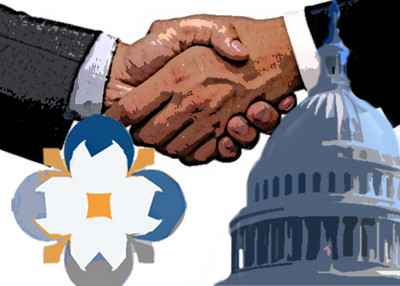 The FBI severed its relationship with the Council on American-Islamic Relations (CAIR) in 2008, saying until it determines "whether there continues to be a connection between" CAIR leadership and Hamas terrorists, the organization is not an appropriate liaison partner.

Two recent episodes show that, despite this rhetoric and evidence linking CAIR to a Hamas support network – in addition to unresolved questions about its current connections – government agencies continue to engage with the group, even sending its officials abroad to represent the U.S.

In one case, the State Department paid for a CAIR executive to travel to Mali, where he cast America as a place where "American Muslims have been subjected to increased discrimination from racial and religious profiling by law enforcement." In the other, the FBI's top agent in Chicago spoke at an event moderated by a CAIR attorney.

A spokesman said that Special Agent in Charge Rob Grant only learned of the CAIR involvement at the last minute and felt it was better to proceed rather than create an incident.

Meanwhile, CAIR-Michigan Executive Director Dawud Walid is back from his second consecutive government-financed travel to Mali to "build religious and cultural ties between American religious and civic leaders with Malian counterparts."

According to a transcript posted on his own web site, Walid told his Malian hosts that "America has evolved to be one of the world's most tolerant societies regarding religious expression and practice."

But State Department money also financed Walid's trashing of American treatment of American Muslims. "Since the tragedy of September 11, 2001, American Muslims have been subjected to increased discrimination from racial and religious profiling by law enforcement, a rise in hate crimes, work place discrimination, to the recent trend of some citizens and elected officials protesting the construction of new mosques. Late last year, an Imam named Luqman Ameen Abdullah was shot 21 times including twice in the back during a raid by law enforcement agencies based upon an investigation of his mosque, which ended up proving no links to terrorism or treason," Walid said in Bamako, Mali.

As he has done since the Abdullah shooting last October, Walid failed to tell his audience that Abdullah fired first as FBI agents moved in to arrest him. Four other people who did not fire as agents advanced were arrested unharmed. That went unmentioned, too.

His harsh message should come as no surprise to anyone who pays attention to what Walid says. Like other CAIR officials, he routinely casts law enforcement agents as waging an unregulated witch hunt on Muslims, or worse, hinting that Abdullah was unarmed when agents gunned him down in cold blood.

The trip was organized by Michigan State University, Walid said, but funded by the federal government. Here's more of his diplomacy:

"I stated that Muslims in America have many challenges from Islamophobia to unjust government policies that profile us," he told the Detroit News. "However, we have interfaith partners that stand in solidarity for fairness and justice with Muslims and that this is an American tradition. I also mentioned the shooting of Imam Luqman and discussed the case with some leaders."

It is not his first attempt to sow suspicion in the Muslim community toward federal law enforcement. During a May 2009 interview on 98.7 Kiss FM in New York, he accused the FBI of "going into mosques on fishing expeditions and basically cultivating and inciting people towards extremism."

In that same interview, he said "the FBI is basically manufacturing their own terrorism suspects to give the appearance that they're actually doing something tangible in the so-called 'War on Terrorism.'"

In testimony Wednesday before the Senate Judiciary Committee, FBI Director Robert Mueller again denied allegations his agents were using informants without cause. "I believe they're effective. I think they're appropriate," he said of guidelines for surveillance. "And I think they are the appropriate balance between civil liberties on the one hand and giving us the tools we need to protect the American public against terrorist attacks."

The question is whether the U.S. can't find better people to send abroad as representatives of the American Muslim community. It's a problem Investigative Project on Terrorism Executive Director Steven Emerson highlighted two years ago in testimony before the House Foreign Affairs Subcommittee on Terrorism, Nonproliferation and Trade and again in a 2009 story.

And it's yet another example of the government lacking a consistent policy when it comes to working with radical Islamists.

In May, we documented the $582,000 lease the U.S. Census Bureau signed with a Virginia Islamic center that law enforcement officials call a front for Hamas terrorists and "linked to numerous individuals linked to terrorism financing."

When it comes to CAIR, the FBI's formal position is not to engage in communication with the organization unrelated to an investigation. That policy came after evidence uncovered in a Hamas-support investigation showed CAIR's founders were part of a network of Hamas supporters.

According to federal prosecutors, that evidence shows CAIR was "a participant in an ongoing and ultimately unlawful conspiracy to support a designated terrorist organization, a conspiracy from which CAIR never withdrew."

Sometimes, however, CAIR gets around the ban by inserting its officials into public forums in which FBI officials have agreed to participate. That's what a spokesman said happened in Chicago Tuesday night, when Special Agent in Charge Rob Grant spoke at an event moderated by a CAIR attorney.

Though CAIR promoted the event on its Chicago chapter website and in emails at least a day earlier, FBI officials said they were unaware civil rights director Christina Abraham was the moderator "until 30 minutes or so before the scheduled start of Mr. Grant's presentation," spokesman Ross Rice said in an e-mail.

Abraham played a minimal role, introducing Grant and calling on audience members for questions, Rice said. "She did not ask any questions herself nor did she take issue with any of Mr. Grant's remarks. I think it would have been a huge mistake for us to leave simply because the CAIR representative was present or make an issue of her participation. In my opinion, Mr. Grant's presentation was well received and we made significant inroads into a segment of the Muslim community in Chicago."

FBI Detroit SAC Andrew Arena faced a similar dilemma in January, when he was invited to speak on a panel in Dearborn organized by the Muslim Students Association that also included CAIR's Dawud Walid. The FBI wasn't a sponsor and had no say over other participants.

Although Walid was promoting the notion that his agents used excessive force in the Abdullah shooting, Arena chose to confront Walid to the extent he was allowed to comment on the case. He went further on the informant issue:

"We use [informants] in gang cases, we use them in public corruption cases, we use them in everything we do. We use them in counterterrorism cases. But the use of those sources are governed by the Attorney General guidelines and the internal rules of the FBI. Folks, we don't target religions. We don't target buildings. We can't do it. Under our rules, under the laws of this land, under the Constitution we can't do it. I would go to jail; agents would lose their jobs. Plain and simply you cannot do it. You have to have predication. You have to have reason to send people into a location.

Now let's be plain and simple folks. Bad people can't hide behind religion. They can't hide inside the building and claim safe haven."

Arena did well to tackle the false narrative that America is unfairly treating its Muslim population. Walid's travel, combined with CAIR's ability to share lecterns with FBI officials despite a ban on contact with the group, raises the question why the U.S. government continues to legitimize and even promote the conspiratorial messages of radical Muslim officials.