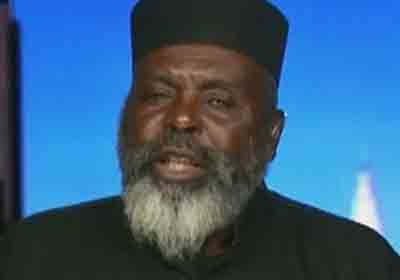 Abdul Alim Musa, born as Clarence Reams, is the director of Masjid Al-Islam in Washington, DC and founder and director of the As-Sabiqun movement. Musa is also a member of the Institute of Contemporary Islamic Thought (ICIT), an organization established in 1998 to continue the work of the global Islamic Movement. [1]

The As-Sabiqun website provides an extensive biography for Musa. According to this biography, Musa was born in Arkansas, but grew up in Oakland, California. In the 1960s, Musa's involvement with the drug trade earned him unwanted attention from law enforcement. Around the same time, he became sympathetic to the Black Panthers and the Nation of Islam. To avoid the consequences of his crimes, Musa traveled the world.[2]

As-Sabiqun's biography of Musa also claims that he became "leading cocaine-exporter in Colombia," met exiled Black Panther leaders such as Eldridge Cleaver and Pete O'Neal in Algeria.[3] After returning to the U.S. he supposedly surrendered to law enforcement authorities and served an unspecified time in prison. While incarcerated, Musa converted to Islam.[4]

The As-Sabiqun biography states that following the 1979 Islamic Revolution in Iran, Musa announced his support for the Islamic Republic and its leader Ayatollah Khomeini. Since the early 1980s, he made several visits to Iran as a representative of Muslims in the United States and a supporter of, as he puts it, "the Islamic revival."[5]

In November 1996, Musa was a featured speaker at a conference calling for the establishment of an Islamic state in London. [6] Titled, "In Pursuit of the Power of Islam," the list of conference speakers included hardliners like Saudi dissident Dr. Muhammad al-Massari of Committee for the Defense of Legitimate Rights of Arabia; renowned neo-Nazi turned Islamic militant Ahmed Huber;[7] Muhammad al-Asi (also from the US); and Ayatollah Taskhiri, described on the program as "Head of International Department Office of Imam Khamanei." The speakers list on the program also advertised the participation by "representatives of FIS [Islamic Salvation Front], HIZBULLAH, HAMAS and other parts of the Global Islamic Movement."[8]

As-Sabiqun describes itself as ideologically aligned with radical Islamist thinkers such as Hasan al-Banna, Sayyid Qutb, Ayatollah Khomeini, and others.[9] As stated on As Sabiqun's website, "The paramount goal of the movement is the establishment of Islam as a complete way of life in America…The group does not advocate participation in the American political process as an ideal method for advancing Islamic issues in the U.S.; instead, it believes in a strong and active outreach to the people of the U.S."[10]

According to the "As-Sabiqun Resolution" published on the group's website, As-Sabiqun embraces a global vision of Islamic revolution and world domination:

We resolve to work with other communities (movements), whether they are local, national, or international, toward the end of harnessing the power of Muslims and their resources for the purpose of reestablishing the system of governance known as Khilafah, or the Caliphate, patterned after the leadership exemplified by Prophet Muhammad (saw). We resolve to utilize all the tools of Islam to develop an analysis and plan of action to totally and completely obliterate the hold of jahiliyyah and enable Islam to take complete control of our lives, and ultimately, the lives of all human beings on Earth.[11]

The As-Sibiqun newsletter article titled "To Do List 2007" also emphasized the role that jihad should play in this struggle:

Always cherish the intention of jihād and the desire for martyrdom in the way of Allah and actually prepare yourself for that.[12]

In his role as an Imam and representative of Masjid al-Islam and As-Sabiqun, Musa has consistently put forth strident anti-American, anti-Israel and anti-Semitic messages that emphasize his conviction that America and Israel seek to destroy Islam and subjugate all Muslims. Based on this, Musa preaches on the glory of suicide bombings and Jihad, while praising terrorist groups like Hamas and Hizballah as "heroes" and condemning the U.S. as the true terrorist. Musa also denies that al-Qaeda was behind the 9/11 terrorist attacks, and blames it instead on the Bush Administration and the CIA. He also claims that the U.S. military is "occupying" Iraq in order to foment a civil war amongst Muslims.

The following list represents a compilation of excerpts from Musa's khutbas (sermons) and speeches from mosques, rallies, conferences and university campuses across the country:

May 9, 2007: At UC Irvine during the Muslim Student Union's "Holocaust Memorial Week," Musa gave a lecture on "Islamic Revival" and stated:

"Or they tell the weak-minded Muslims here in America, ‘Don't talk about jihad.' One of the big leaders here got up and said, ‘There's no jihad in Koran.' I say, He must be reading a different book, than we read, cause jihad, mujahadin, [UI two words in Arabic]. In fact Allah says in the Koran if can remember, [several words in Arabic]. This is what it says in the original language. What does that mean? That Allah loves those who fight in his cause. A solid cemented structure.

"Now that don't mean fighting you. When you hear about some bomber that blew up the World Trade Center or blew up this or blew up that, I'm telling you brothers and sisters, that is your CIA. That is your government blowing up people, blaming it on us, so it will give it – ah – the guy laughing [pointing towards audience] – I'm telling you, if you think it's wrong, study Adolph Hitler. What did Adolph Hitler do? You all read history. Is't that right? Didn't Adolph Hitler burn the Reichstag, blame it on the people and he became the Fuhrer and what happened? He could suspend civil liberties. And he could wipe out and he could war against all of his enemies. That's what Adolph Hitler did, isn't that right? He burned the Reichstag himself. They blew up the World Trade Center, blamed it on us, and then come out with the PATRIOT Act and all these criminal laws. Right?"

…. MUSA: Well, I can only answer part of that at one time. First of all you asked me if I liked Hizballah. Hizballah is a great movement and a great organization.

HANNITY: They are a terrorist movement.

MUSA: It's not - you call it a terrorist movement. You cast your words - that's your State Department.

HANNITY: Hamas is a terror organization and they take credit for terror. Would you like to take a look at their history? Read it. Maybe learn something.

….We have Imams going on television and radio talking about how there is no Jihad in Islam. Oh no there is no Jihad in Islam. Islam means peace. But Allah (swt) says he loves those who fight in his way like a (unintelligible). So when we have leaders in Palestine going out and fighting in the way of Allah or Imams should not be jumping up on television talking about how they are suicide bombers. They are not suicide bombers They are martyrs. The Zionists are suicide bombers.

October 31, 2001: At a Press Conference on the US War on Terrorism aired by CSPAN, Musa said:

All Praise belongs to Allah we praise him, we seek his help his assistance and his guidance. We believe in him and do not disbelieve in him. I bear witness that there is no God but Allah. And Mohammed sallalahu allehu asalam is his servant and messenger. Allah sent him that is Mohammed Wadin Alhak. The religion the way the methodology of truth, and this way of life known as Islam will dominate all other ways of life whether George Bush, whether George Bush senior whether Bill Clinton, whether Putin, whether the Japanese, the Chinese, whether all of them, the French and every other oppressor join together in one solid mass as they have for centuries, for generations to fight against Islam, it don't make no difference. That Allah says that Islam will rise to its proper position in the world whether these mushricks ...whether they get together still Islam will rein supreme whether they like it or not.

[1] "The ICIT: an introduction," The Institute of Contemporary Islamic Thought, http://www.islamicthought.org/icit-doc.html (Accessed August 20, 2007).