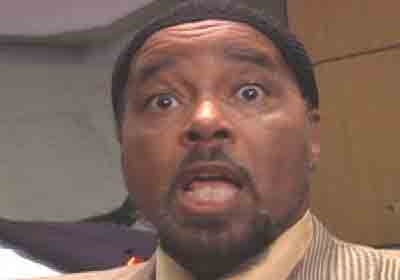 A former Baptist who converted to Islam in 1976,[1] Bray describes himself as a "long time civil and human rights activist" and has held positions as the political director of the Muslim Public Affairs Council (MPAC) and president of the Coordinating Council of Muslim Organizations (CCMO).[2] He served as executive director of the Muslim American Society (MAS) Freedom Foundation[3] until suffering a stroke in late 2010. MAS announced the Freedom Foundation would close in June 2011.

In his past roles, Bray defended terrorists and those alleged to be supporting them. For instance, in March 2004, he declared the Israeli assassination of Hamas spiritual leader Ahmed Yassin as "an unlawful, cowardly and dangerous act of state-sponsored terrorism."[4]

At a Washington, D.C. rally in 2000, Bray shared the stage with Abdurahamn Alamoudi as Alamoudi declared his support for Hamas and Hizballah.[5] Bray signaled his support for the terrorist organizations, pumping his fist up in the air and grinning as the crowd cheered.[6]

Criticizing the jury verdict in that case, Bray asked "What he said was perhaps repugnant and inflammatory, but was it really his intent to have people go and take his words and translate that into going and killing other human beings, specifically Americans?"[9]

Bray lashed out when Alamoudi was indicted in September 2003 for illegal financial dealings with Libya.[10] According to court documents, Alamoudi provided financial support to Hamas and Al Qaeda.[11] After Alamoudi was denied bail in December 2003, Bray remarked, "Justice is turned on its head when alleged murderers, rapists, and pedophiles can get bail and sail, and respected Muslim leaders, smeared as terrorists without any charges, get jail and legal hell."[12]

Alamoudi pleaded guilty to engaging in prohibited transactions with a foreign country[13] and was sentenced to 23 years in jail in October 2004.[14] He also has admitted his involvement in a plot, masterminded by Libyan leader Muammar Qadaffi, to assassinate Crown Prince Abdullah of Saudi Arabia.[15]

In the February 2004 edition of the American Muslim, several months before Alamoudi's conviction, Bray was quoted as saying: "It is not uncharacteristic for America to go through these stages. We have to understand that the arrest of people like Abdurahman Alamoudi and the arrest of other activists is also an attempt to stifle dissent, and that this is not the first time that America has betrayed its lofty principles and values in times of hysteria."[16] Bray says that the "current witch-hunt" is the work of the pro-Israeli lobby and the Christian Right, both of which want to keep Muslims on the sidelines and exploit the post-9/11 anti-Muslim bias.[17] He adds, "These arrests are an attempt to marginalize the tremendous potential the Muslim community has, especially since we're growing every day in this country."[18]

At a MAS Freedom Foundation conference in May 2004, a few months before Alamoudi's conviction, Bray presented him with a Freedom Foundation award (in absentia) for being an "outstanding American Muslim who has courageously stood in defense of freedom and justice." Bray told the crowd, "I don't care what they say, we're gonna continue to work with him, and the other detainees, Abdelrahim, and we are gonna continue to fight back. Let our people go! Let our people go!"[19]

Bray has hosted a show on the AM radio station WWTL's broadcasts. The Washington Post has reported on the experiences of Peter Hebert, a Montgomery County tech executive and religious Jew, in listening to the station, which first got his attention when he heard a speaker on one broadcast state, "Rabbis are idolators, slay them."[20] In the following weeks, Hebert "heard hosts and guests talk about Jewish control of the media and a Jewish conspiracy to attack the World Trade Center and blame Muslims for the assault. And he's heard Bray defending Hezbollah, which the State Department labels a terrorist organization."[21]

The Washington Post writer went on to describe some content that he personally heard on the station: "I, too, have had some startling moments listening to WWTL, awakening, for example, to hear Koran readings such as this: 'As for those who disbelieve, theirs will be a boiling drink and painful death,' and, 'Those who desire the world . . . their home will be the fire.' Now there's a bracing wake-up show."[22]

The Washington Post article quotes Hebert as saying, "I've also heard lengthy discussions about 'the influence of capital' and the 'how the media are twisted by their particular ownership' -- a leftist critique commonplace on any college campus but one that turns more pointed on Bray's show: 'We know who the owners are,' one guest said, prompting another to reply, 'They answer to the Zionist regime.' A few days later, another guest pronounced Zionism 'more than racism' and said 'America is dripping with the blood of our people.' Bray laughed, responding: 'This is the only show with two disclaimers. When I go off the air, they play two disclaimers.'"[23]

A common refrain from Bray is that the War on Terrorism is actually a War on Islam. In fact, at a Washington, DC press conference in 2003, Bray stated, "The war on terrorism is really becoming a war on Muslims."[24]