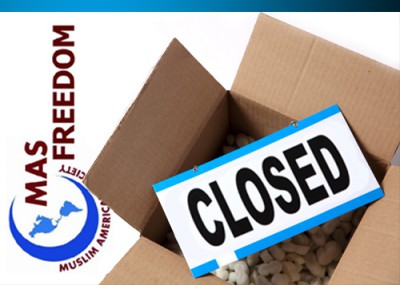 The Muslim American Society (MAS) announced the closure of its activist wing, the MAS Freedom Foundation ("MAS Freedom"), in a press release issued Friday due to a lack of funding.

Headquartered in Alexandria, Va., MAS was founded as the United States chapter of the Muslim Brotherhood, a global Sunni revivalist movement that seeks to establish an Islamic caliphate governed by Sharia or Islamic law.

The MAS website describes MAS Freedom as its "national grassroots advocacy arm" that seeks to "build an American Muslim community that is politically empowered, civically engaged, fully protected in the areas of civil and human rights, and able to contribute to the advancement of society, both in the United States and the world."

In his position as executive director of MAS Freedom, controversial Islamist and convicted felon Mahdi Bray has made statements in defense of radical individuals and terror supporters.

Aafia Siddiqui, better known as "Lady Al-Qaida," was sentenced in September to 86 years for attempting to murder American soldiers and federal agents in Afghanistan, and six other crimes. Just a few days before the sentencing Bray criticized Siddiqui's conviction on his blog.

"Dr. Siddiqui's conviction is seriously flawed and her kidnapping and detention is a grave violation of human rights and international law," he wrote.

In June last year, a Pakistani court handed down 10-year prison sentences to five Muslim men from the D.C. metro area. The men had traveled to Pakistan with the purpose of joining Taliban forces to fight American troops in Afghanistan.

Bray called the sentencing "a tragic affair from all perspectives."

A MAS Freedom press release rationalized the actions of the men as fallout of American foreign policy and retaliation to "U.S. collaboration with Israeli occupation of Palestine." It held U.S. foreign policy responsible for luring Muslim youth "into the kind of naïve adventurism that would lead them to leave America and seek common cause with extremist groups."

Bray has also supported designated terrorist groups and their leaders. In 2004, he denounced the killing of Hamas founder and spiritual leader Ahmed Yassin in an Israeli attack. "This is an unlawful, cowardly, and dangerous act of state-sponsored terrorism," a MAS Freedom press release quoted him as saying.

At a rally in 2000, Bray shared the stage with then-American Muslim Council head Abdurahman Alamoudi as Alamoudi announced his support for Hamas and Hizballah. An exclusive IPT video caught Bray declaring his support for the terrorist groups as the crowd cheered along.

At a MAS-sponsored Muslim convention in 2003, Bray alleged the U.S. government pursued policies discriminatory toward the American Muslim community.

"I am saddened to hear that the greatest purveyor of discrimination against Muslims is indeed my own government here at home," Bray was reported saying.

Bray has alleged that the "real targets" of Department of Homeland Security fusion centers set up in several states to share information and intelligence "are members of the American Muslim community." He also charged that information collected by the centers is "particularly about Muslims" and obtained from "Islamophobes, neo-cons and self-appointed right-wing terrorist experts."

In response to reports of FBI use of undercover informants to infiltrate a mosque in Irvine, California, Bray accused the government of sending "criminal agent provocateurs to incite violence and unlawful conduct" in mosques.

Ibrahim Ramey is another key functionary of MAS Freedom. In his role as director of the civil and human rights division of the organization, Ramey has defended Islamist charities against charges of material support of terrorism, and has alleged the existence of Islamophobia and anti-Muslim sentiment in the U.S.

During a discussion on homegrown terrorism on PBS NewsHour, Ramey criticized "zealous prosecutors that will twist evidence against Muslims." He alleged that "the human and civil rights of some Muslims have been abrogated or challenged by the current climate of Islamophobia in the country."

Ramey has also challenged the verdict in the trial of the Holy Land Foundation (HLF) in Dallas. Ramey described the HLF as a "legitimate Muslim charity," claiming there was no "substantial evidence" proving the charity laundered money to Hamas.

In November 2008, a federal jury found the Islamist charity and several of its leaders guilty of funneling millions of dollars to Hamas.

Discrimination is rife across America with serious impact on Muslim's access to fundamental rights. Governments, institutions and people have not taken appropriate action to stop the detrimental impact that discrimination has on society as a whole. Until this day comes, MAS will be at the forefront of the struggle.

Minorities, particularly Arab and African people, religious groups, and women continue to face widespread exclusion, intolerance and prejudice, which results in their being denied a wide range of legitimate rights. As long as this behavior continues, we will continue.

Muslim American Society has created a structure for progressive advocacy and challenged inequality and religious marginalization. We've won battles but we are determined to win the war against bigotry and injustice.

It is important to say that even as good things are generated, the growth process is not painless. It's a vulnerable position. The challenges is still there, but MAS pioneers have learned to push past it.

Years ago, the Muslim American Society created a model, a transformative movement in which young Muslim Americans could explore and expand their understanding of what justice and inclusion means. The Society's work has given Islamic communities the opportunity to stand in the center of American life rather than on the margins. Today, tomorrow and in the years to come, we remain committed to this goal. We hope you will join us in this effort.