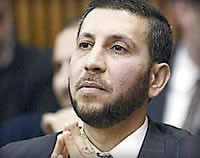 Fawaz Mohammed Damra is the former Imam of the Islamic Center of Cleveland, Ohio.[1] On January 13, 2002 he was arrested and charged with illegal procurement of United States citizenship. Damra was convicted in an Akron court on June 18, 2004 for lying about his association with the Palestinian Islamic Jihad on his citizenship application.[2]

Before living in Ohio, Damra spent time in New York City where he was affiliated with the Al Kifah Refugee Center. The center was was established as the American-based affiliate of Mekhtab al-Khidemat, which later became Al Qaeda after the Soviet-Afghan war ended.[3] Damra served as the spiritual leader of the Al Farouq mosque in Brooklyn, an institution frequented by several conspirators implicated in the 1993 World Trade Center Bombing.[4]

During his time as an Imam in Cleveland, Damra raised funds for the Palestinian Islamic Jihad through the Islamic Committee for Palestine (ICP), an organization headed by Sami Al-Arian. In 1989, at the 2nd Annual ICP conference in Chicago, speaking on a panel with the spiritual leader of PIJ, Damra stated:

The first principle is that terrorism, and terrorism alone, is the path to liberation. This has its point of departure God, the Great and Almighty's, words: "And make for them whatever you can of fighting men and horses, to terrify thereby the enemies of God and your enemy." The second principle is that "settlement is decided by the sword." That which finalizes the matter - struggle for the cause of Palestine - is the military solution.

My intent was that, if what they mean by jihad is terrorism, then we are terrorists!

During a 1991 fundraiser, he told his audience that Al-Arian's Islamic Committee for Palestine was "the active arm of the Islamic Jihad Movement in Palestine" but used a different name for "security reasons." At the same conference, he openly raised funds for violent jihad (Click here for the video and here for the transcript).

He was also a close associate of Al-Arian, the admitted Palestinian Islamic Jihad leader, and as a result, Damra was the unnamed Unindicted Co-conspirator One in the indictment against Al-Arian. Publicly, Damra worked hard to create an air of moderation, working in inter-faith programs with Cleveland area Christians and Jews.[5] Click here to see the transcript of a tapped phone conversation between Damra and Sami Al-Arian where they discussed raising funds for the families of suicide bombers.

Damra was deported to the West Bank in January 2007.