(Do) Cry for Me, Palestina 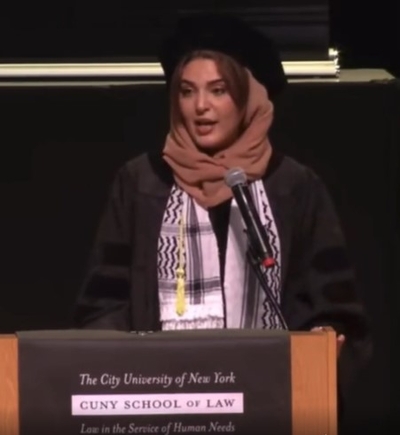 You guys, the Zionists are being so mean to me!

All I've done is call (repeatedly) for the elimination of the world's only Jewish state "by any means necessary." Sure, any means includes violence and terrorism, but I made that sentiment a principal element of my organization "Within Our Lifetime."

And yeah, I might have said during a webinar last year that Zionism, the belief in a Jewish state in their ancestral homeland and a refuge against historic antisemitism, is "one of the most anti-Semitic ... things that we see." My host at that event is a known Palestinian Islamic Jihad board member who celebrated its deadly attacks and called for more.

But who would have a problem with that or find me an inappropriate speaker for a university commencement ceremony?? Islamophobes, that's who.

Those Zionists at the Committee for Accuracy in Middle East Reporting and Analysis (CAMERA) thought it was bad that I was chosen to speak to the City University of New York (CUNY) law school graduation earlier this month. They said I liked an Instagram post glorifying a recent bloody and deadly attack. I mean, I did, but what's that mean? They also weren't big fans of my organization Within Our Lifetime's call to keep "Zionist professors" off campus, and "Zionist students" away from Palestinian students.

"Are these the values CUNY Law believes best represent the school?" CAMERA's David Litman asked. "The Class of 2022? Does CUNY Law condone the vicious hatred that this speaker has displayed?"

That's what I meant when I wrote that, "My mentions are full of tweets slandering/attacking me for my commencement speech. It's funny because they literally prove my point. Palestinians speaking about our experience with zionist oppression terrifies zionists. They want us to silence ourselves." 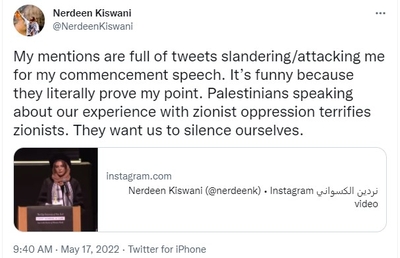 I can say whatever hateful, incendiary thing I want. But if you criticize it, that's slander! (And I just graduated law school.)

In my commencement speech, I told students to wear sunscreen, to not be afraid to fail and to reach for the stars. Just kidding! I lashed out at "a campaign of Zionist harassment by well-funded organizations with ties to the Israeli government and military" that targets me "on the basis of my Palestinian identity and organizing."

Like during another talk last month, when I said that we shouldn't "act like Israel has a right to exist, or negotiations can be made with this colonial entity. But we know that that can never, and should never be the case." That's just me expressing my identity.

The same kind of baseless Zionist smears targeted Zahra Billoo. Zahra runs the Council on American-Islamic Relations' (CAIR) San Francisco office. She's great, but maybe a little soft. Sure, she'll say Israel shouldn't exist and tell you the Jews are our enemies if they support its existence. But is she liking bloody imagery celebrating terrorist attacks?

Still, saying Muslims should "pay attention" to every major Jewish organization, from campus Hillels to the Anti-Defamation League, did make the Zionists pretty upset. So Zahra's got that going for her.

CAIR stood strong, though, saying all the attention was all a smear for Billoo daring "to express an opinion about Palestinian human rights. We will not be silenced or swayed. God willing."

And she's been at it much longer than I have. Her so-called anti-Semitism was so obvious that she was kicked off the board of the Women's March! What a bad ass.

When that happened, Billoo blamed "an Islamophobic smear campaign led by the usual antagonists, who have long targeted me, my colleagues, and anyone else who dares speak out in support of Palestinian human rights and the right to self-determination."

Anyway, the good news is I'm a law school graduate. I'll have more time for Within Our Lifetime – named for our belief that Palestine will be liberated within our lifetime – and spreading our message that we "reject all collaboration and dialogue with zionist organizations through a strict policy of anti-normalization. The liberation of Palestine requires the abolition of zionism." [Emphasis original]

Calling for the elimination of an existing country is a completely normal, non-controversial view. Vladimir Putin is doing it right now and doing all he can to realize his dream. Do you see anybody cursing him?

What I mean is, my ideas should be beyond challenge. Anyone who disagrees is simply part of "a campaign of Zionist harassment by well-funded organizations with ties to the Israeli government and military."