The Selective Outrage of American Islamists 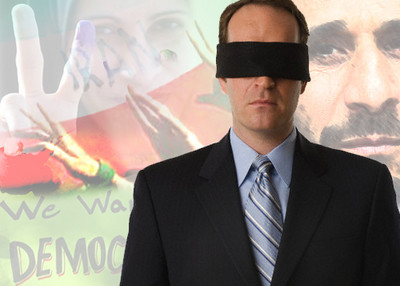 When the Tunisian government moved to outlaw headscarves worn by Muslim women in 2006, the Council on American-Islamic Relations (CAIR) sprang into action to condemn the foreign government's policy.

In a release, CAIR announced it was "urging all people of conscience to contact the government of Tunisia" to protest the restrictions.

The stakes are quite a bit higher on the streets of Tehran this week. Yet, CAIR thus far has been unable to muster so much as a call for calm on both sides. Meanwhile, anti-government protesters are being beaten and even shot for the sin of peaceful demonstration. At least eight people have been killed thus far.

Arguably, a strong, united statement in support of democracy from the self-appointed mouthpieces for the American Muslim community would carry some weight in America and internationally. If CAIR didn't think that was so, it wouldn't issue statements about other global events.

It cranked out daily condemnations of Israel's Gaza incursion, but failed to mention Hamas rocket fire at Israeli cities that precipitated the fighting. It condemned the 2006 bombing of Sunni and Shia holy sites in Iraq:

"The atrocious attack on the Askariya shrine is an obvious attempt to incite sectarian violence," said CAIR Executive Director Nihad Awad. "The Iraqi people, and Muslims worldwide, must not fall into the trap set by those who seek division and mutual hatred." Sectarian violence serves only the enemies of Iraq and the Iraqi people, Awad emphasized.

All of this makes CAIR's silence on the slaughter of peaceful Iranian demonstrators all the more puzzling. What little CAIR has said about Iran in the past has been in defense of the regime. It has not condemned the punishment of stoning women to death as a punishment for adultery and its Tampa office director even denied such horrors took place.

And it has long advocated ending a U.S. ban on diplomatic relations with Iran that dates back to the 1979 hostage crisis.

Twelve years ago, CAIR condemned the Simon Wiesenthal Center Museum of Tolerance for daring to include the inspiration for that crime, the Ayatollah Khomeini, amid a display showing totalitarian leaders which also included Adolf Hitler. The image "can only serve to equate Islam with Nazism," said a letter to Wiesenthal Center founder Rabbi Marvin Hier from CAIR, the Muslim Public Affairs Council (MPAC) and the Islamic Shura Council of Southern California.

According to one report:

"Nihad Awad, executive director of the Council on American-Islamic Relations, spoke about Islamic principles for alleviating poverty, caring for the environment and working for peace and justice. He encouraged his interreligious audience to cooperate more closely toward these goals.

According to a letter from Joseph Gerson of the pacifist Quaker group, the American Friends Service Committee, Awad "stressed that Islam teaches the importance of justice – even in response to enemies, and that terror must always be condemned and rejected."

Now seems like a good time to exercise that lesson. None of the major national Islamist organizations has issued a statement about the contested Iranian election or the resulting demonstrations.

Check the home pages of the Islamic Society of North America, the Muslim Public Affairs Council and the Muslim American Society and try to find a statement of concern over the legitimacy of the vote count or over the welfare of the Iranian people bravely standing up to their government.

"The democratic process, free speech, the ability of people to peacefully dissent – all those are universal values and need to be respected," President Barack Obama said this week.

(Updated June 19 After a week of demonstrations, ISNA issued a statement of concern:

"ISNA calls on the government of the Islamic Republic of Iran to release Dr. Yazdi and all political prisoners and to respect the civil rights of the members of the media and political activists. The government must respect the rights of all individuals to exercise their freedom of expression and peaceful protest, which Islamic values and traditions affirm, and which are guaranteed by the Iranian constitution.")

Mahdi Bray, director of the Muslim American Society (MAS) political arm called MAS-Freedom, has not been able to muster a word of concern about the Iranian government's excessive response to put the revolt down. That's disappointing, since Bray had no trouble condemning the United States for "the injustices that are heaped upon Muslims right here in America" during an audience with Ahmadinejad in September 2007.

In this stunning video, Bray repeatedly tells the Iranian leader "we share your vision" and that Allah demands his people confront injustice anywhere in the world:

Does Bray's failure to speak out this week indicate he does not find Iran's brutality in an attempt to put down the demonstrations unjust?

You can tell a lot about a group by the battles it chooses. We learn just as much by those they sit out.

He speaks the truth

The image "can only serve to equate Islam with Nazism," said a letter to Wiesenthal Center founder Rabbi Marvin Hier from CAIR, the Muslim Public Affairs Council (MPAC) and the Islamic Shura Council of Southern California.

Well, one can find plenty of other images where islam amd muslim representatives are either Nazi, or Nazi-like. Such as Amin Al-Husseiny meeting Hitler. Such as the same mufti inspecting the Islamo-Nazi Bosnian "sword" brigade. Such as the Nazi salute shared by Hizzbullah and Hamas. Its all the same, supremacist theory mating with brutality and orwellian inversion of logic and history. Justice is killing 6 million Jews, and justice is the promise to repeat the deed using the arms kindly overlooked by the IAEA and US president barack Hussein.

CAIR is Islamist, and islamist justice is death and submission to all others.