Ignoring All Others, Anti-Israel Campus Groups Use Coronavirus to Attack Israel 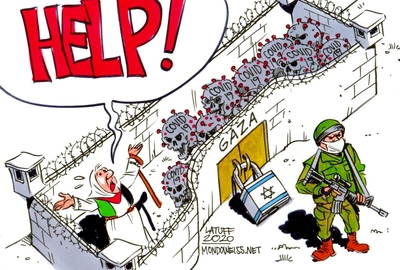 "This could become one of the worst outbreaks of #coronavirus in the world," the group IfNotNow (INN) wrote on Facebook. "If the Israeli Government does not immediately lift its own military blockade of Gaza and deliver medical supplies like masks and ventilators, thousands of Palestinians could die."

The anti-Israel group Jewish Voice for Peace (JVP) circulated a petition asking Congress to end the Gaza blockade, and claimed that coronavirus was "uniquely threatening to Palestinians."

"We call upon members of Congress to tell Israel to end its death sentence for the people of Gaza and lift the blockade," they demanded.

JVP held a virtual rally Tuesday. One speaker made clear that he was not just concerned about Palestinian health and welfare, but about getting rid of Israel altogether.

"You hear a lot about Sderot," said Palestine Solidarity Committee (PSC) Kamel Hawwash. He called the Israeli city that is subject to relentless Hamas rocket fire, "one of these Israeli settlements that was built very near Gaza that is actually on the side of a little village...whose inhabitants were moved to Gaza. It isn't about the first rocket being fired from Gaza, it is about the Nakba [Israel's creation] and the right of return ... and clearly this siege, this immoral siege is adding to the difficulties that they have and the fears that we all have for the virus to cross into Gaza. And let's hope that they are spared that. And let us work together to ensure that Palestine is free and the reconnection of people with every part of Palestine is reestablished."

Other anti-Israel groups have kept more focused on blaming Israel for what happens in Gaza, despite Israel's 2005 complete withdrawal from the area.

Students for Justice in Palestine (SJP) chapters bemoaned Gaza's healthcare system, saying it will prove impossible for Palestinians to cope with coronavirus compared to richer countries who are struggling to deal with the pandemic as well.

"The Gaza Strip's health system is already on the verge of collapse as a result of a 14-year-long Israeli blockade," the Ohio State SJP chapter wrote on Facebook. "How are two million Palestinians trapped in the world's largest open-air prison expected to cope?"

In fact, Israel has sent medical aid for Palestinians in the West Bank and Gaza Strip to help combat the spread of the virus.

"Daily life has been disrupted for millions with the outbreak of #COVID19, but COGAT's regular operations of transferring goods between Israel and the Gaza Strip continue," Israel's Coordinator of Government and Activities in the Territories (COGAT) announced Wednesday. "145 tons of medical supplies were transferred through the Kerem Shalom Crossing into Gaza last week." 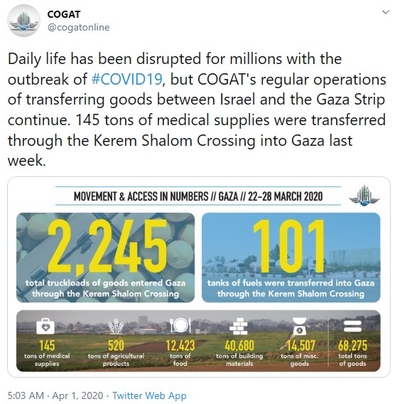 COGAT also said Tuesday that it sent a large shipment to the Palestinian healthcare system, transferred from Jordan through the Allenby Bridge, which included hundreds of medical supplies and testing kits.

On Monday, COGAT oversaw a transfer of medical equipment which the World Health Organization (WHO) donated to help repair defective machines located at the European Gaza Hospital. The head of COGAT's Coordination and Liaison Administration (CLA) Col. Iyad Sarhan emphasized that they were working nonstop to help stop the spread of the virus in Gaza.

Israel's efforts haven't stopped Hamas from blaming Israel for the spread of coronavirus. Hamas statements have been "accompanied by direct and indirect threats, and by demands," The Meir Amit Intelligence and Terrorism Information Center reported. "Some demands include that Israel release terrorist prisoners in Israeli jails because of the potential for transmission of coronavirus" and "the demand that Israel lift the [so-called] 'siege' of the Gaza Strip." These demands have been parroted by INN, JVP, and SJP.

"Israel & its U.S. benefactor are responsible for the health and safety of all Palestinians struggling under Israel's occupation, especially political prisons who are mostly vulnerable in the time of #COVID as it spreads dangerously fast in Israeli prisons. #PalestineLandDay," the National SJP chapter shared on Facebook. "Free all political prisoners," read the image shared with that post.

"Gaza hospitals are stretched in normal times and experience shortages of beds, medical equipment and doctors, meaning that any new virus outbreak would be highly problematic and would lead Hamas to quickly demand assistance from Israel," the Jewish Journal reported. "The way that Hamas usually demands such help is by threating to fire rockets at Israeli cities."

That's exactly what happened last Friday night. Hamas launched a rocket toward the south of Israel but injuries were not reported.

Rocket fire from Hamas and other Gaza-based terrorists are part of an infrastructure used to foment more terrorist attacks on Israeli civilians, often at the expense of improving the quality of life for Palestinians. It is the reason Israel imposed a blockade on Gaza – to try to inhibit the terrorists' ability to dig attack tunnels or make more explosives to fire at civilians. It is a reality the anti-Israel activists and campus groups fail to mention.

"If ventilators are not brought into [Gaza], we'll take them by force from Israel and stop the breathing of 6 million Israelis," Sinwar said.

Those threats do nothing to help people in Gaza. But they will not be mentioned, much less condemned, by those obsessed with demonizing Israel.

Egypt, meanwhile, has imposed its own blockade on Gaza for security reasons. But when it comes to coronavirus fears, neither Egypt nor Hamas, which governs the area, is blamed. Only Israel.

Despite the rhetoric from Hamas, more than two-thirds of Palestinians surveyed support "cooperation between Israel and the Palestinians to prevent the spread of coronavirus," a Palestinian Center for Public Opinion poll found.

This goes against the narrative groups like IfNotNow, Jewish Voice for Peace, and Students for Justice in Palestine consistently push.

But the groups and their leaders have shown they are not interested in cooperation.

"Now tell me again that anti-Zionism isn't antisemitism" wrote British activist and blogger David Collier. He shared a screenshot of anti-Zionist activists celebrating the death of the Holocaust survivor. "This is the sickening way that some received the news of the death of a survivor on Twitter."

Don't let these groups fool you into thinking they care about Palestinian lives. Their goal is to use yet another tragedy to push their anti-Israel agenda.