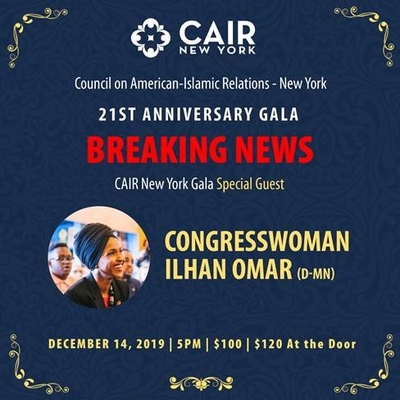 It was time for another Council on the American Islamic Relations (CAIR) chapter to raise money last weekend, and once again, the organization turned to two big-name speakers despite their records of anti-Semitic speech.

Other CAIR banquets feature political activist Linda Sarsour, who has blamed Jews for police shootings of unarmed black people in America. She also refused to condemn the anti-Semitic Nation of Islam leader Louis Farrakhan, and is known for her opposition to Israel's existence, having famously written "Nothing is creepier than Zionism."

U.S. Rep. Rashida Tlaib, D-Mich., is another popular choice to speak at CAIR events who has a history of anti-Semitic statements and associations. Tlaib was pictured with a Hizballah supporter after her swearing-in to the U.S. House of Representatives. Two months later, she posed for a photo with a Palestinian activist who mourned the death of a terrorist who murdered Jews.

Both Omar and Hill have found themselves in hot water for anti-Semitic statements.

In 2012, Omar tweeted that "Israel has hypnotized the world." Last February, she wrote that the blowback she received for alleging Jewish control over American foreign policy was "all about the Benjamins baby," referring to Jewish political contributions. She generated controversy again in April by minimizing the 9/11 attacks as a day that "some people did something."

CNN fired Hill in 2018 after he called for "a free Palestine from the river to the sea" during a United Nations speech. He also rationalized violent resistance against Israel, questioning "how can you romanticize nonviolence when you have a state that is at all moments waging war against you, against your bodies, poisoning your water, limiting your access to water, locking up your children, killing you."

Their remarks to the CAIR-NY banquet pushed the idea that Muslim Americans should be fearful for their future in the United States.

"But in all seriousness, we are truly again gathering in dark times for Muslims not only here in the United States, but around the world," Omar claimed.

While Hill and Omar pushed the notion that Muslims are under attack in America, the FBI's Uniform Crime Reporting saw a decrease in hate crimes from 2017 to 2018, and of the total 1,617 religious hate crimes, 58.8 percent targeted Jews while 13.2 percent were against Muslims.

Hill and Omar also spoke about fighting discrimination in a time of darkness.

And while Hill and Omar deny being anti-Semites, they remain silent about attacks against Jews when the perpetrators are people other than white supremacists.

They have said little about ongoing violent attacks on Jews in New York, a pattern that held Saturday evening.

It's a little less than a 19-mile drive from the banquet site – the LaGuardia Airport Marriott in Queens, N.Y. – to the JC Kosher Supermarket in Jersey City, where three people were gunned down last week in a targeted, anti-Semitic attack. Though it happened days before the banquet, the attack and the hatred that drove it went without mention.

The Jersey City terrorists were followers of the Black Hebrew Israelites, who believe they are real descendants of biblical Jews, while Jews today are imposters.

"Based on what we have collected so far ... we believe that the suspects held views that reflected hatred of the Jewish people, as well as a hatred of law enforcement," New Jersey Attorney General Gurbir Grewal told reporters last week.

The reluctance to call out anti-Semitic attacks by black people was not limited to the CAIR banquet.

Tlaib hastily deleted a tweet blaming white supremacy for the shooting. "This is heartbreaking," she wrote "White Supremacy kills."

After deleting the original tweet, she made no subsequent statement about the attack or the people responsible.

CAIR continues to embrace people like Hill, who envisions a world without the Jewish state, and Omar, who can't stop stepping into anti-Semitic tropes, in order to peddle a message that Muslims in America are constantly under attack. Saturday's event was just the latest example.