Muslim Brotherhood, Hamas: No Peace as Long as Israel Exists 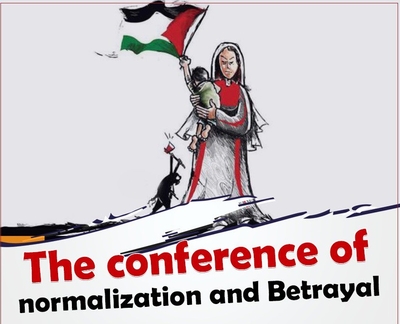 Israel's Arab neighbors increasingly are looking to bury the hatchet after decades of a technical state of war, but not the Muslim Brotherhood.

His comments came as the parties debate the pros and cons of President Trump's "Deal of the Century" in Manama, Bahrain. The Brotherhood made it clear the details didn't matter.

"The Muslim Brotherhood condemns all forms of normalization with the Zionist enemy, and all the actions leading up to the Zionist-American deal, and confirms that all Arab regimes involved in the "Deal of the Century" are anti-Arab peoples, and traitors to the Palestinian cause," the Muslim Brotherhood said on its Facebook page Tuesday. "The Arab and Islamic people's position will remain firm in support of the Palestinian cause, not recognized by the Zionist entity, and is alien to all forms of normalization."

The U.S. proposal would devote $27.5 billion to building up the West Bank and Gaza, including a $5 billion transportation corridor to connect the territories. It is part of a proposed $50 billion economic investment in the region akin to the post-World War II Marshall Plan. Saudi Arabia contends the plan leads to a fully independent Palestinian state.

The International Union of Muslim Scholars (IUMS), which for years was led by Muslim Brotherhood ideologue Sheikh Yusuf Qaradawi, joined the Muslim Brotherhood in condemning the Manama conference and the "Deal of the Century," vowing that compromise was impossible.

"The land of Palestine is all Islamic and not one inch of it can be given up, nor its inheritance sold," IUMS Trustee Sheikh Hassan Ould Aldo said in statement on the Muslim scholars' group's website. "This is not a deal."

Aldo and the Brotherhood use language similar to what Hamas used in its original charter. It rejected any peaceful coexistence. To them, Palestine is part of a waqf, a holy Islamic trust, that no person can negotiate away.

The IUMS used similar language to the Muslim Brotherhood's most recent statement in prior fatwas forbidding the normalization of relations with Israel.

"All political, economic, and cultural dealings and all forms of normalization with the Zionist entity are considered to be a form of supporting and sustaining the occupier in its occupation of land and holy places," a 2009 IUMS fatwa said, echoing the Muslim Brotherhood's condemnation of the "Deal of the Century."

On Monday, in an Arabic press release, Hamas, the Brotherhood's Palestinian offshoot, described all of Israel as "territories occupied in 1948" . The English version of that statement omitted the reference but described the U.S. plan as "dead letters, as the Palestinian people, who have been fighting for their freedom for more than 100 years, will not be lured into waving their claim to their homeland in return for the world's wealth."

The statements make it clear that, to the Brotherhood and to Hamas, the problem is not Israeli government actions or policies. It is the country's existence that can never be accepted in a negotiation. They believe that Jews are the enemies of Allah, as countless videos on Hamas' Al-Aqsa TV show.

"Killing the occupiers [Israelis] is worship that Allah made into law," a 2012 propaganda music video produced by Hamas' military wing, the Qassam Brigades, and translated by Palestine Media Watch, says. "Killing Jews is worship that draws us close to Allah," Arabic text on a sign in the video said.

The Hamas charter quotes Muslim Brotherhood founder Hasan al-Banna: "Israel will exist and will continue to exist until Islam will obliterate it, just as it obliterated others before it."

Al-Banna called Jews and Zionists "the enemies of Allah" in his book Fee Qaafilatil-Ikhwaan al-Muslimeen.

He reached out to Sheikh Muhammad Amin al-Husseini, then the grand mufti of Jerusalem, in 1935 with the aim of helping him fight Jewish migration. Brotherhood leaders launched a fundraising campaign for Palestinian jihadists and sent weapons to use against the Jews.

The Brotherhood took a strong pro-Nazi stance and sent al-Husseini to Germany to meet with Adolf Hitler. He told Hitler that Jews were the common enemy of Islam and the Nazis. Al-Husseini shared al-Banna's ideas with Hitler and served as an intermediary between the Brotherhood founder and the Nazi dictator.

Al-Husseini helped recruit Muslims from the Balkans, Egypt and elsewhere to fight for the Nazis and became an SS general. France later arrested al-Husseini as a war criminal, but the British persuaded France to release him to Egypt to prevent further violence in the Muslim world.

Although many in the Middle East are currently reconciling with Israel, the Muslim Brotherhood and its Palestinian offshoots remain firm in their belief that there can be no peace as long as Israel exists.