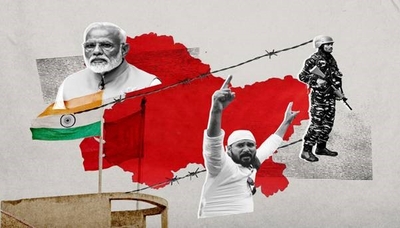 Pakistan and its American Islamist supporters expressed "alarm at India's aggression in Muslim Kashmir" and condemned the "undemocratic Hindu-Chauvinist bigotry driving it." They also accused the Indian government of wanting "to change the demographics of a disputed region."

In contrast, India's largest Muslim organization has no concerns of a "Hindu takeover" of a Muslim-majority state.

"Kashmir is an integral part of India and that all Kashmiris are our compatriots. Any separatist movement is harmful not only for the country but for people of Kashmir as well," a resolution passed by the Jamiat Ulama-i-Hind reads.

"We feel it's our national duty to protect the democratic and human rights of Kashmiri people," the resolution says. "Nevertheless, it's our firm belief that their welfare lies in getting integrated with India. The inimical forces and neighbouring country are bent upon destroying Kashmir."

That's a not-so-subtle reference to Pakistan, which uses terrorist proxies to wage attacks across India, including in Kashmir. In February, for example, U.S.-designated Jaish-e-Mohamed terrorists killed 40 soldiers in the Pulwama district of Jammu and Kashmir, provoking an Indian military retaliation that destroyed terrorist training camps in Pakistan-administered Kashmir.

It is worth noting the Jamiat Ulama-i-Hind played a key role in India's independence struggle against British colonial rule and opposed partition of the country on the basis of religion.

Tensions between India and Pakistan re-ignited Aug. 5 after India's ruling Bhartiya Janata Party (BJP) voided a "temporary" constitutional provision that gave Jammu and Kashmir special autonomous powers to make its own laws outside of defense, foreign affairs, finance, and communications. The action divided the state into two federally-administered territories that will now be governed by New Delhi.

The Indian government justified the action by saying the old provision fanned separatism and cross-border terrorism, and encouraged corruption and family rule in the state. It also precluded the benefits of robust social and economic development experienced in the rest of the country from reaching the state.

"They openly stated hatred for Muslims and Christians," he added.

But Khan is in no position to cast stones. He has a well-documented history of anti-Semitism. He also heads a country that has pursued an anti-Semitic policy since its inception and refuses to recognize the Jewish State of Israel.

While the partisans call each other names, the fact that a top Muslim body in India supported the Aug. 5 action is getting overlooked.

American Islamists have similarly framed the Indian action in Kashmir in religiously divisive language "as an attempt to dilute the demographics of Muslim-majority Kashmir with Hindu settlers" and claimed the Indian government had "disenfranchised seven million Kashmiris" and was "orchestrating a pogrom of hate and violence against Muslims."

Islamic Pakistan and secular India have fought several wars over Kashmir since British rule in the region ended in 1947. During the resulting partition of the subcontinent, several hundred independent kingdoms which were ruled by native princes and closely allied with British India had to choose whether to be part of India or Pakistan. The Hindu ruler of Muslim-majority Jammu and Kashmir opted for independence. But after an invasion by Pakistan-backed tribal invaders, he signed an Instrument of Accession to become part of India. The document restricted India's parliament to impose legislation upon Jammu and Kashmir to external affairs, defense, and communications. Articles 370 reflected this special status and included as a temporary measure in the Indian Constitution until the time the state become fully integrated with the rest of the Indian union.

Khan also attacked the Modi government for "imposing a military curfew in Kashmir, imprisoning its population in their homes and cutting off their phone, internet and television connections." But in India's view, Pakistan's terror industry made it necessary to enforce "temporary preventive and precautionary measures" to ensure security.

American Islamists, echoing Khan, have published unsubstantiated reports on the "deteriorating human rights situation" in the region that are grossly exaggerated and often fabricated. "10 Million Kashmiris imprisoned in their homes by 800,000 Indian forces. 50 KILLED, 200 BLINDED, 5000 INJURED in 10 DAYS. Internet, Phonelines [sic], News Media, Medicines SHUT DOWN" read a flier calling for a Sept. 27 rally in support of the "siege" in Kashmir in Corona, Cal.

Since revoking the constitutional provisions, Indian intelligence has uncovered multiple Pakistani attempts to infiltrate terrorists from across the border to launch attacks on security forces in Jammu and Kashmir. In the past two months alone, more than 60 armed terrorists have crossed into Kashmir, the Times of India reports.

Terrorism has been used as a proxy tool by the Pakistani state to bolster its ideological claim to Kashmir. That claim is moored in a "Two-Nation Theory" that "Hindus and Muslims belong to two different religious philosophies, social customs and literary traditions. They neither intermarry nor eat together, and indeed they belong to two different civilisations which are based mainly on conflicting ideas and conceptions."

That's the theory pushed by Pakistan's founder, Muhammad Ali Jinnah. His ideology has shaped Pakistan's identity and dictates the country's revanchist claims to Kashmir, a Muslim-majority region abutting its border. Pakistan considers Kashmir an "unfinished business of Partition" and successive Pakistani civilian and military leaders have propagated radical Islam and engaged in cross-border terrorism to wrest control of Kashmir from India.

JI's Kashmir affiliate reportedly has "established strong links" with the ISI and through the Pakistan High Commission in New Delhi, has been responsible for fueling terrorism in the state, including through the U.S.-designated terrorist group Hizbul Mujahideen that spawned out of the JI.

But Pakistan and its Islamist backers' allegations about Kashmir are false. Reports of increased Muslim lynching and attacks by vigilante cow-protection groups in recent years notwithstanding, India's 180 million Muslims—almost the same number as in Pakistan—make up an integral part of the India's social, economic, and political fabric. Pakistan's tyrannical subjugation of its minorities, on the other hand, has resulted in the Islamic republic's minority population plummeting from 23 percent at the time of the country's independence in 1947 to 3 percent today. And while American Islamists over play the threat from "radical Hinduism (Hindutva)" they have stayed silent on Pakistan's state-sponsored ethnic cleansing of hundreds of thousands of Shias, Ahmadis, Christians, Hindus, Sikhs, Balochis, Mohajirs, Sindhi, and Pashtun populations.

The fact that the foremost Muslim organization in India has come out in support of India's new policy in Kashmir disproves Jinnah's "Two Nation Theory," and discredits attempts by Pakistan and its Islamist backers to bring the world to view the Kashmir issue through a communal lens.