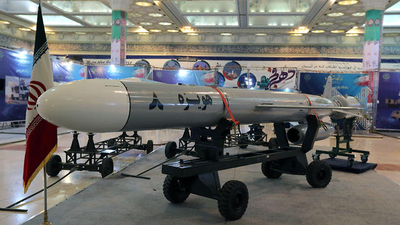 The Sept. 14 Iranian attack on a key Saudi Arabian oil facility serves as a warning about the Islamic Republic's radical intentions – and its ability – to destabilize international security.

Iran presents three different, yet interlinked threats, which were recently outlined by the head of the Iran Branch in the Israel Defense Forces (IDF) Military Intelligence Research Department.

They include Iran's nuclear program, its destabilizing regional activities beyond its borders, and its precision missile program. The Iranians are "trying to transfer this precision [missile capability] to Lebanon," the intelligence officer told the Hebrew language Walla news website in a Sept. 30 interview, referring to ongoing Iranian weapons proliferation efforts designed to further add to Hizballah's enormous arsenal.

It is reasonable to assume that weapons showcased or used by Iran will find their way to radical non-state actors on Iran's payroll throughout the region. Therefore, the firing of a dozen precise cruise missiles and more than 20 drones at the Saudi oil facility should also be seen as demonstration of the kind of advanced attack capabilities that Iran intends to transfer to terrorist organizations.

Iran has been trying to increase weapons proliferation to its proxies in recent months, as recent Israeli revelations about Iranian arms smuggling to Hizballah in Lebanon show.

Iran's vision of the Middle East is one in which terrorist proxies can threaten U.S. allies with fast-flying cruise missiles, explosive drone swarms, and ballistic missiles. It is worth noting that some of these weapons were, not long ago, considered capabilities that were exclusively possessed by state militaries. Today, they are available to terrorists who promote Iran's hegemonic agenda.

As a result, the attack on Saudi Arabia marks a critical point in the development of the Iranian threat. The fact that Iran is able to produce reliable, accurate cruise missiles, and long-range drones, as the attack demonstrated, means that its proxies will also be nourished by such weapons.

The challenge these capabilities pose to air defenses can be seen in Saudi Arabia's failure to defend the Abqaiq and Khurais oil facilities, despite installing Patriot air defenses there. According to a report by Jane's Defense Weekly, the radar that serves the air defense system at Abqaiq likely struggled to identify threats coming from the north in time.

Saudi Arabia has already been hit repeatedly by Houthi drone and missile attacks from Yemen – arms that were produced in Iran, and which the Houthis cannot develop or manufacture on their own.

Iran responded by employing a range of ways to transmit the message that if it cannot export its own oil, neither can Gulf Arab states. The loudest example came in the form the combined missile and drone attack that Iran launched at Saudi oil facilities, including the Abqaiq site, which is the largest oil facility of its type in the world.

The Institute for National Security Studies in Tel Aviv described the incident as "the most serious kinetic attack on oil facilities in the Gulf since the 1991 Gulf War, in terms of damage and economic significance," noting that it has temporarily impacted around 50 percent of Saudi oil exports – or 5 percent of the global oil output.

U.S. intelligence officials believe the attack came directly from Iranian territory, and that Iranian Supreme Leader Ali Khamenei personally signed off on it.

Yet the incident should not be viewed in isolation from the wider linkage that exists between the Iranian arms industry and the network of Iranian-backed terror proxies.

By 2015, a rule of thumb had been established in the IDF: Advanced weapons that are manufactured in Iranian factories end up in the hands of the hybrid Shi'ite terror armies.

"What happens in Syria happens in Lebanon [in terms of weapons availability], and vice versa. I'll go a step further and say that everything that happens in Iran can end up in Syria, which can then end up in Lebanon," an Israeli Navy source familiar with the Iranian weapons network once stated.

That formula is as relevant today as it was in 2015, and the trend has only grown in scope.

In fact, Iran has already armed Hizballah with the Yakhont supersonic anti-ship cruise missile, which the Lebanese terror organization could also use to hit land targets deep in Israel. The Yakhont's 300 kilometer range and high speed means that it poses a serious threat to targets. It also means Iran has been arming non-state terror organizations with cruise missiles for years.

To be sure, Israel has its own, highly advanced defense and attack capabilities to deal with this threat. Defenses include a four-layered air defense system, made up of Iron Dome, David's Sling, Arrow 2, and Arrow 3, designed collectively to shoot down every kind of aerial threat heading toward Israel. David's Sling can shoot down cruise missiles and advanced drones, as well as medium-to-long range rockets, and some ballistic missiles.

But the proliferation of sophisticated arms by Iran represents a significant transformation of the region, and contributes greatly to its destabilization.

Iran's weapons supply lines to the Houthis in Yemen and to Shi'ite militias in Iraq are also highly active, with ballistic and cruise missiles being smuggled out of Iran on a regular basis, as well as a variety of other offensive capabilities.

Just as Iran has turned Lebanon into a frontline staging area for its Hizballah proxy army, it is doing the same in Iraq, where Shi'ite militias have received Iranian ballistic missiles. The same is true in Yemen, and it has tried to do the same in Syria – though Israel's large-scale preventative action has gotten in the way of the Iranian takeover project there.

During the past three years, Iran has also tried to recreate aspects of its missile industry in Lebanon itself, setting up sites on Lebanese territory that convert rockets into precision guided ballistic missiles – an effort that has, so far, been stopped by Israel.

In Syria Iran has tried to set up missile production centers as well.

The Iranian weapons industry manufactures an array of missiles, based on designs of Chinese, Russian, and North Korean projectiles. According to a recent report by the Center for Strategic and International Studies, the Iranian liquid-fueled Shahab missile series, based on the Soviet scud missile, has a range of between 300 to 2,000 kilometers. Iran has also used Chinese designs to develop its own solid-fueled missiles, known as the Fateh series, that can hit targets between 200 to 2,000 kilometers. Iran also produces cruise missiles that can hit targets some 2,500 kilometers away.

"Allow me to say it simply in Israel's name: Iran did it, from A to Z," Prime Minister Netanyahu said on Sept. 24, in reference to the attack on the Saudi oil facilities. "Israel will know how to defend itself against aggression of this kind," he added.

The fact that the Iranian Quds Force has, over the past year, directly engaged Israel in exchanges of fire from Syria, going beyond its usual pattern of activating proxies, further risks turning the region into a powder keg.

Iran is set to continue to transfer game-changing arms to terror groups under its command. America's allies in the region – both Israel and Arab countries – are facing the same, growing threat.