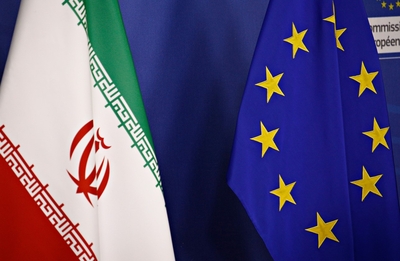 The lightning American drone strike which killed the Iranian terror master Qasem Soleimani Jan. 3 in Baghdad is without any doubt the biggest win against terrorism for the United States. That includes killing both al-Qaida's Osama bin Laden and Islamic State's Abu Bakr al-Baghdadi.

Indeed, Iran's Soleimani was instrumental in so many terror operations around the world in the past 25 years. While the West should have been ecstatic at the passing of a man that had directly and indirectly killed hundreds of thousands of people, including during the Syrian war, Europe's overall reaction was one of criticism of its American ally. In contrast, when Iran struck bases in Iraq used by American forces Tuesday, the reaction in Europe was much more timid and the E.U. did not condemn Iran's strikes.

First, it is important to note that the Iranian regime has been at war with the West since it came to power in 1979, and that countries such as France and the United Kingdom have directly suffered casualties at the hands of Tehran. After swallowing 40 years of terror attacks, kidnappings, without any real retaliation from the West, the American strike against Soleimani was the first answer.

To put things in perspective, Soleimani had been on the target list of not only Americans, French, and Israelis, but also British. In 2007, the British SAS planned to assassinate him during the Iraq War, when he was identified as the man running the campaign against British troops in Basra. The plans were stopped by a personal intervention from Labor Foreign Secretary David Miliband, who was afraid of the unintended consequences of the kill in the region.

Despite the pedigree and C.V. of terror master Soleimani, reading and listening to some political leaders in Europe – and for that matter, some Democrats in the United States – one has the impression that a regular politician had been killed. The moral stance of those leaders is despicable when one knows how instrumental Soleimani was in helping dictator Bashar al-Assad kill 500,000 of his own people. For proof, spineless European Council President Charles Michel said the "cycle of violence, provocations and retaliations which we have witnessed in #Iraq over the past few weeks has to stop," putting on the same level terror attacks from Iran's proxies in Iraq and the U.S. killing of Soleimani.

The Iranian lobby seems to be quite effective in Brussels. Indeed, the three E.U. "foreign ministers" have been pro-Iranian regime: After Catherine Ashton, the mullah-loving Federica Mogherini and now the Spanish Socialist Josep Borell, who is well-known for his close connections to Tehran. The E.U. is not appeasing Tehran but actually siding de facto with the Iranian regime.

Time and again the E.U. has chosen a rogue regime with European blood on its hands over a long-time steady ally that has saved the continent from tyranny over the 20th century.

Here is Tehran's track record in just the past few months: it attacked oil tankers in the UAE, seized a British tanker in the Strait of Hormuz, attacked Saudi Aramco oil facilities, kidnapped more Western nationals, killed hundreds of protesters in Iraq, killed more than 1,500 of its own people during the recent November demonstrations, shot down a U.S. drone, killed an American contractor and stormed the American embassy in Iraq.

What did Europe's diplomacy do to sanction Iran for its nefarious actions? Nothing.

They actually rewarded Iran. The E-3 (France, Germany and the U.K.) decided last year to set up a mechanism, called INSTEX, to circumvent the U.S. sanctions on Iran. Germany has historically had excellent relations not only with Iran, but also with Lebanese terror proxy Hizballah. Germany has been very tolerant about illegal Hizballah activities in the country, and in some areas of Berlin, it is not rare to see Hizballah flags proudly displayed outside homes.

Europe has witnessed some of Iran's most aggressive action in the past two years. Iran has tried to carry out terror attacks in France, the Netherlands and Denmark. The most sophisticated attack, which was foiled by European security services, was a 2018 plot to bomb a huge rally near Paris organized by the MeK, the largest exiled Iranian opposition group, and attended by former New York Mayor Rudy Giuliani among other personalities.

Worsening French-Iranian relations after this foiled attack caused French authorities to fear redux of the 1985-86 Iran-led terror campaign in France. This pushed French President Emmanuel Macron to defuse the tension by having a much more lenient foreign policy vis-à-vis Iran. Thus, France, which had been leading the global anti-Iran front since the 1980s, began bending backwards last year to please Iran. For instance, Macron instructed French secret services to tone down their criticism of Iran, especially regarding the state terrorism accusations. He also proposed offering Iran a $15 billion line of credit in September if it returns to the fold. While France tried to placate Iran, Tehran decided last summer to take two French citizens hostage.

The tool of kidnapping Western citizens is something of a trademark for the rogue regime in Tehran: at least 14 foreign and dual nationals, especially French and British, are known to be detained in Iran. Europe has been sadly apathetic and has historically given in to the Iranian regime's demands in order to get their citizens freed. Recently, Iran's Foreign Minister Javad Zarif has confirmed that the U.K. offered the release of £400m "owed" to Iran from a decades-old deal in return for Tehran freeing British-Iranian charity worker Nazanin Zaghari-Ratcliffe.

The U.K. has been the main European target of Iranian nefarious acts along with France. This should not be a surprise since in 2016, Khameini, Iran's supreme leader, said, "For centuries, Britain has always been the source of wickedness and evil among nations of our region. The strikes that these Britons have blown against the lives of our neighbors are incomparable to others."

So, Iran conducted an aggressive campaign against the U.K., not only by kidnapping citizens, but also by conducting a brutal cyberattack on the British Parliament in 2017 that hit dozens of MPs and 9,000 email accounts, including that of then-Prime Minister Theresa May. Also, in Scotland, dissidents were being terrorized last year by "armed" Iranian agents who threatened to kill them and their families in Iran if they did not halt their political opposition.

After the U.K. bravely placed Iran's most potent terror proxy, Hizballah, on its terror organizations list last year, including both the political and military wings, a mind-boggling story came out. The British government covered up its 2015 discovery of a Hizballah bomb factory near London. Reportedly, the discovery was covered up to not shed a bad light on Iran after the nuclear deal was signed.

One of the main reasons for Europe to be very timid with Iran is concern that Iran could carry out, through its proxies, a major terror campaign on the continent. This argument is not taken lightly in European capitals, especially since Iran called last year for Europe to normalize trade ties with the Islamic Republic despite U.S. sanctions, or face "consequences."

While continental Europe has been appeasing Iran, as we saw after the killing of terror master Soleimani, the U.K. is showing some signs of rebellion. Indeed, in a very British understated way, U.K. Prime Minister Boris Johnson said he "will not lament" the death of Iran's top general, who "posed a threat to all our interests" and warned the Iranians not to attempt "retaliation or reprisals" against America.

Olivier Guitta is the Managing Director of GlobalStrat, a security and geopolitical risk consulting company for companies and governments. Olivier tweets @OlivierGuitta