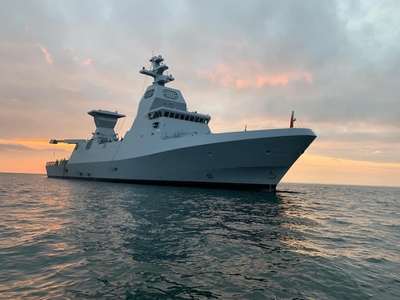 The arrival of the first of four new German-made warships in Israel next month provides some clues about Hizballah's increasingly accurate firepower.

One of the primary missions of the new Sa'ar 6-type Corvettes will be to protect offshore gas drilling rigs in Israel's economic waters. According to Israeli navy officials, some 70 percent of Israel's electricity consumption today is based on gas, meaning that if the natural gas rigs are shut down due to attack, Israel shuts down. Disruptions to the transfer of natural gas from the rigs to power production plants is therefore not something that Israel can afford.

The ships are equipped with advanced air defense systems and powerful radar, designed to detect and track a range of threats – including fast, low-flying cruise missiles, ballistic surface-to-sea missiles and rockets, and unmanned aerial vehicles (UAV). All of these weapons are believed to already be in Hizballah's arsenal.

"We as a navy cannot allow any missile, ballistic threat, cruise missile, or UAV to go through us and hit any gas rig. What we are doing is like building an iron wall in defense of the gas rigs," one naval official said earlier in November.

Hizballah is keen on building up capabilities that can target Israel's Mediterranean energy resources, but that same firepower also can threaten land-based strategic targets.

Hizballah's inventory of approximately 150,000 projectiles includes some 200 long-range missiles and 3,500 medium-range rockets that can reach Tel Aviv. However, the difference between guided and unguided threats is very significant.

While Israel's air defenses layers can stop many projectile attacks, a barrage of guided missiles on strategic or critical sites would pose a significantly greater challenge to the country's infrastructure, economy, or ability to defend itself (depending on the target).

According to some reports, Hizballah is in possession of the supersonic Russian made anti-ship cruise missile, the Yakhont, having trafficked it from the Assad regime, likely with the assistance of the Iranian overseas special operations unit, the Quds Force.

It also has an inventory of sub-sonic Chinese-made C-802 cruise missiles (used by Hizballah in its 2006 conflict with Israel to strike an Israeli naval ship). If fired from the Lebanese coastline, such cruise missiles can theoretically be used to hit coastal targets in Israel, such as navy bases or civilian ports. The vast majority of Israel's imports occur via sea lanes, underlining just how critical it is for Israel's national security to keep the ports operational at all times.

Yet the biggest potential conventional threat comes from Iranian and Hizballah intentions to set up domestic missile production sites inside Lebanon. These sites are designed to serially produce guided ballistic missiles, or to convert unguided rockets into precision guided missiles (PGMs).

The Israel Defense Forces exposed three PGM manufacturing sites in Beirut last month, all either in or close to civilian buildings. It remains unknown at what stage of operations the sites are, or whether they were exposed before they began full-scale operations. One site is underneath a seven-story residential building, home to over 70 families, and adjacent to a medical center and a church. A second PGM manufacturing site located underneath a five-story residential building, home to approximately 50 families, and is nearby a mosque. A third PGM manufacturing site was marked out in an industrial area, near two gas companies, and a gas station.

"Hizballah's strategy to hide weapons and operate from civilian neighborhoods stems from its intentions to draw the IDF to target these civilian areas in times of escalation. If Hizballah were to target Israeli civilians from these sites, the IDF would have no choice but to react—potentially placing Lebanese civilians in harm's way—causing international outrage toward the IDF," the IDF said in its release exposing the three sites.

The exposure constitutes the latest Israeli warning to Hizballah and its Iranian patron to cease and desist from their intentions to create PGM factories in Lebanon, a program Israel views as its number one conventional security threat, and one that Israel is unwilling to tolerate.

It remains unclear whether Hizballah chief Hassan Nasrallah has fully grasped the extent of Israel's determination to stop PGM production lines from being set up on Lebanese soil. In response to the IDF statement, Hizballah took journalists in Lebanon on a tour of the sites in an attempt to deny the existence of the PGM activities.

In fact, ongoing attempts by Hizballah and Iran to proceed with the missile program form one of the top potential triggers for escalation in the region. This remains a priority, although Hizballah is neck deep in attempts to navigate Lebanon's political and economic woes, inflamed further by the coronavirus pandemic, Hizballah's own conduct, and the August Beirut blast, which killed 204 people, injured more than 6,500, and damaged 80 percent of the capital's residential buildings. Meanwhile, Lebanon's economy is bankrupt, with no life preserver in site.

Nasrallah has the ability to dissuade Iran's Supreme Leader Ayatollah Khamenei from pressing on with the missile production program in Lebanon if Hizballah's secretary-general concludes that it is too risky.

The fact that Quds Force Commander Qassem Soleimani, who was eliminated in a U.S. drone strike in Baghdad in January, is absent from the scene could aid in convincing Hizballah to back down.

Soleimani has been replaced by his former deputy, Esmail Ghaani, and this less charismatic leader may struggle to be as effective as Soleimani was in taking Khamenei's ideology of building a Shi'ite crescent of missile bases, smuggling networks, terror cells, and militias, and turning this dark vision into reality. Still, Iran is determined to continue trying, despite being under major U.S. sanctions pressure and facing coronavirus challenges at home.

The ongoing tension on the Israeli-Lebanese border meanwhile, sparked by Nasrallah's attempt to take "controlled revenge" against Israel for the death of one his operatives in an alleged Israeli airstrike in Syria, shows that while Hizballah remains deterred by Israel. The deceptive calm in the area rests on highly fragile foundations, which are always prone to collapse and to the eruption of conflict. The PGM program remains a top threat to this tense quiet.

The missile production program in Lebanon should be seen as one component in Iran's wider malign activities in the region, which include attempts to build guided missile factory and launch pads in Syria, and setting up Iranian missile bases in Iraq.

Deploying missiles to Iraq is designed to let Iran target both Saudi Arabia and Israel, representing a new threat that did not exist just a few years ago.

Another Iranian aspiration is to create a network of surface-to-air missile batteries across the Shi'ite axis, stretching across Lebanon, Syria, Iraq, and Iran, in order to challenge the Israeli Air Force and any other adversarial air power, such as Saudi Arabia or the UAE.

Iran's efforts to deploy PGMs in Syria appear to have run into a wall of repeated Israeli air strikes, preventing this effort from coming to fruition.

Yet Iran has succeeded in moving a number of cruise missiles to Syria.

Overall, Iran looks set to continue to take advantage of upheaval in Lebanon, Iraq, and Yemen to proliferate its missiles to terrorist proxies.

In addition to its active defense campaign, Israel is also responding by beefing up its air defense capabilities, and ensuring that it widens its aerial and intelligence superiority, so that it can detect emerging threats, disrupt them in time, and continue to exercise deterrence against Hizballah and the remainder of the Iranian radical axis. The arrival of the new Sa'ar 6 warships will significantly boost Israel's capabilities to deal with these threats, both during routine security missions and in any escalation.