Note: This article has been updated to include the Women's March's statement.

Zahra Billoo's tenure as a board member for the national Women's March lasted three days.

The board voted her off Wednesday night, she wrote. The Women's March issued a statement Thursday saying it "found some of her public statements incompatible with the values and mission of the organization."

Billoo disagreed, describing herself as the victim of "an Islamophobic smear campaign," she wrote, "led by the usual antagonists, who have long targeted me, my colleagues, and anyone else who dares speak out in support of Palestinian human rights and the right to self-determination."

The Washington Post reported changes to the Women's March board Monday, noting that outgoing leaders Linda Sarsour, Tamika Mallory and Bob Bland were unable to overcome controversies involving anti-Semitism. In addition to those controversies, Sarsour pushes a blood-libel that makes Jews responsible for police shootings of unarmed black people.

The Investigative Project on Terrorism was among the first to highlight Billoo's appointment Monday, pointing out that she has her own deep well of anti-Semitic rhetoric. It was an obvious problem to everyone but the Washington Post, which failed to mention any of Billoo's record. Instead, the newspaper described her as "a civil rights attorney and executive director of the San Francisco Bay area chapter of the Council on American-Islamic Relations."

Billoo, who does not believe Israel should exist, who compares American Jews who move to Israel and join its army to ISIS terrorists, who casts Muslims who don't share her absolute rejection of Israel and its supporters as sellouts, lashed out at the Women's March board in an overnight Twitter rant.

The board rejected her request to meet to "to address their concerns, and to work with my sisters on the new board to learn, heal, and build together."

"The Women's March, Inc. that voted me off its board tonight is one that no longer demonstrates the strength that inspired millions of women across the country," she wrote.

"This action today demonstrates that this new leadership is unable and unwilling to be an ally during challenging times," she wrote, saying she is the victim of a right-wing smear campaign. Screen grabs and recordings accurately reflecting Billoo's beliefs now constitute a smear campaign. 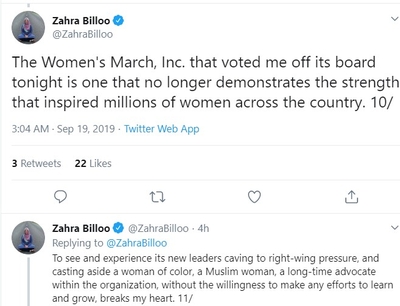 In an attempt at reflection, Billoo acknowledged that "anti-Semitism is indeed a growing and dangerous problem in our country, as is anti-Blackness, anti-immigrant sentiment, Islamophobia, ableism, sexism, and so much more. I condemn any form of bigotry unequivocally, but I also refuse to be silent as allegations of bigotry are weaponized against the most marginalized people, those who find sanctuary and hope in the articulation of truth."

But she cannot bring herself to consider that her blind hate toward Israel and its supporters, which include 95 percent of American Jews, constitute a form of the bigotry she claims to condemn.

She acknowledges "that I wrote passionately. While I may have phrased some of my content differently today, I stand by my words," she wrote. 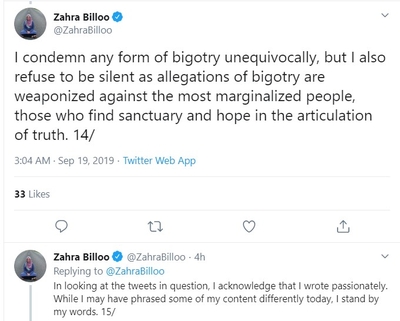 Sarsour was quick to come to Billoo's defense Thursday morning, calling her "one of the most important Muslim American leaders of our time" and adding a hashtag, "#IMarchWithZahra."

She then named a series of people caught up in anti-Semitic controversies, which, like Billoo's are based on actual things that were said. Like Billoo, she dismissed them out of hand.

"Islamophobic smear campaigns are too often and too many. See: Ilhan Omar, Rashida Tlaib, Imam Omar Suleiman, CAIR, me and the list goes on and on. These are not concerns in good faith."

The Women's March may have been slow to act with Sarsour and her colleagues. That may be one reason why it quickly saw a problem adding Billoo, although her controversial views were hardly a secret before she joined the board. But the March was dogged by anti-Semitism accusations, and it quickly became clear that Billoo's presence would only exacerbate a problem. 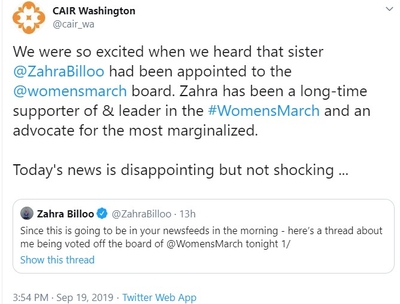 She remains safely ensconced at CAIR, however, where she runs the group's San Francisco chapter. Zahra Billoo: Too anti-Semitic for the Women's March. Right at home with CAIR.