The Council on American Islamic Relations (CAIR) markets itself as a civil rights group and claims that it is an American organization focused on the interests of American Muslims.

As we've pointed out, that was a convenient way for Ayloush to dodge a question about whether CAIR denounces Hamas as a terrorist organization. (It doesn't). CAIR, in fact, often thrusts itself into "Middle East affairs and the conflicts in the Middle East" when it can bash Israel.

Last week's visit to the Jewish state by pro-Israel Saudi blogger Mohammed Saud proved too tempting for CAIR to ignore. Saud was among a delegation of six Arab journalists who met with Knesset members and diplomats in Jerusalem at the invitation of Israel's Ministry of Foreign Affairs.

Palestinians kicked Saud out of the al-Aqsa Mosque, calling him "trash, traitor Zionist" and spitting on him. Others hurled chairs at him as he walked through the narrow streets of East Jerusalem's Old City.

"Saudi Arabia's vicious troll army has a new target: Palestinians," CAIR wrote Sunday on its Facebook page, referring to online "trolls" who engage in deliberately provocative acts. "When Saudi Arabia's most fanatical pro-Israel influencer was kicked out of Jerusalem's al-Aqsa mosque this week, it was a gift for the kingdom's anti-Palestinian trolls, tasked with pushing normalization with Israel at all costs."

CAIR linked to an article on its Facebook and Twitter pages written by pro-Hamas columnist Muhammad Shehada – who posted a selfie with Hamas leader Ismail Haniyeh in 2014 – that condemned Saud for his visit to Israel. 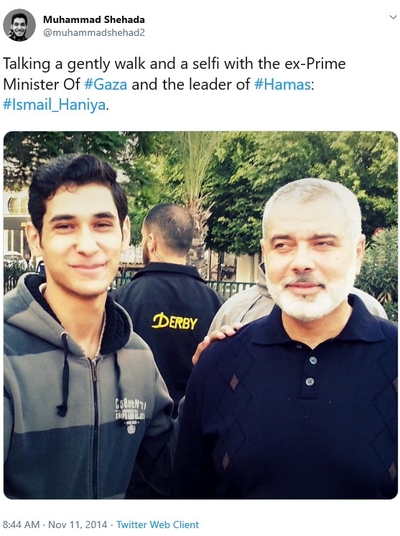 Some people commenting on CAIR's Facebook post called Saud's visit "evil," and one poster said "these Arabs are no different from those zionazis."

In his Haaretz op-ed, Shehada called Saud's visit a "love-fest with Israel to demonize Palestinians." He noted that the visit coincided with Israel's demolition of 70 Palestinian homes in East Jerusalem and that Saudi Arabia was silent. He complained about Saudi Arabia's "severe repression of civil liberties," pointing to its control over internal dissent while allowing criticism of the Palestinians and the arrests of Saudis opposed to normalization with Israel.

Shehada also has kept silent about human rights abuses. Amnesty International reported last year that Hamas authorities in Gaza cracked down on peaceful demonstrators, beating them with batons and that Hamas security forces used torture with "impunity." In March, Amnesty International complained about an "alarming" crackdown on press freedom and the activities of human rights activists concerned with how Hamas runs Gaza.

"The Saudi regime seems desperate to systematically sow the conviction that there's a sudden, yet mainstream, popular pro-normalization current in the kingdom. That current is apparently infatuated with Israel, while pro-Palestinian solidarity has abruptly diminished to zero. It's the 'true' voice of the people, not the regime, and they've grown tired and weary of the Israel-Palestine conflict," Shehada wrote.

He claimed that visit only served to troll the Palestinians and provoke a reaction aimed at showing them in a bad light and closed warning Israel that cozying up with Saudi Arabia could exacerbate anti-Israeli sentiment across the Middle East.

What Saud's visit has to do with Muslim civil rights in America is far from clear. But by posting about it, CAIR certainly inflames anti-Israel passions. It will do that voluntarily, but says it doesn't want to be "dragged" into honestly answering questions about Hamas.