A virulently anti-Israel advocacy group is hosting a Capitol Hill briefing tomorrow where it will allege Israeli mistreatment of American citizens.

American Muslims for Palestine (AMP) was able to secure a room in the Longworth House Office Building, which serves U.S. House of Representatives members and their staffs. AMP plans to allege that U.S. citizens visiting Israel and the West Bank "have reported being physically abused, detained for hours of humiliating questions, strip searched, denied entry and forced to buy plane tickets back to the US. Worse (sic) of all, Israeli forces have killed or gravely injured US citizens."

AMP is not a reliable actor. It routinely hosts conferences that serve as a platform for Israel bashers and openly approves of "resistance" against the "Zionist state."

It is one of the principal advocates of the Boycott, Divestment, and Sanctions (BDS) movement against Israel. BDS campaigns are considered inherently anti-Semitic because they include groups and people dedicated to Israel's elimination and single out Israel for criticism while ignoring far more severe human rights abuses by other nations.

"I believe in [the] holocaust. One of my fav parts of history," AMP-Chicago's Leena Yousef was quoted saying.

"We will resist until we get our freedom without your BS negotiations! # ... #We_Are_All_Hamas," another AMP activist Ahmad Aburas was cited saying.

Meanwhile, the Investigative Project on Terrorism in 2015 found evidence showing that AMP is the successor to a group called the Islamic Association for Palestine (IAP), which was part of a Muslim Brotherhood-led Hamas-support network in the United States. A federal civil suit in Chicago calls AMP and its leaders the IAP's "alter egos and/or successors."

IAP was the "Palestine Committee's" propaganda arm. The Muslim Brotherhood charged the committee with helping Hamas politically and financially in the United States.

The lawsuit seeks to claim payment of $156 million in damages awarded to Stanley and Joyce Boim, who sued the IAP and a related group over the death of their son David in a 1996 Hamas terrorist attack. Some AMP officials, including National Policy Director Osama Abuirshaid, worked with the IAP and other Palestine Committee branches.

Abuirshaid is listed as a speaker at the Capitol Hill briefing.

AMP conferences are similar to IAP's old meetings, and are sponsored by many of the same charitable organizations working for the Palestinian cause. Those include Baitulmaal, the Zakat Foundation, Islamic Relief and United Muslim Relief. "Each of these organizations has close connections with Hamas and disburses funds through Hamas operatives," the new Boim complaint alleged.

IAP raised and funneled money to Hamas through the Holy Land Foundation for Relief and Development (HLF). In 2008, the charity and five top officials were convicted of funneling millions of dollars to Hamas.

Baitulmaal and other Islamist charities mentioned in the complaint appear to have filled that role.

The Gaza-based Unlimited Friends Association for Social Development (UFA), for example, "is closely aligned with senior Hamas leaders" and "openly states that it channels funds from Baitulmaal to the 'families of martyrs of the Palestinian people,'" the complaint said.

"Baitulmaal has openly distributed meat to Hamas functionaries and government workers on Muslim holy days claiming that "it is a matter of principle for the charity to help [Hamas] officials who can't afford to buy meat," it added.

A July 7 report published by the Meir Amit Intelligence and Terrorism Information Center (ITIC) listed Baitulmaal among other American and international Islamist charities that support the Generosity Without Limit Association ("Generosity Association"), a charitable organization operating in the Gaza Strip since 2007, whose board members either serve as operatives or have close affiliations with an umbrella group called the Popular Resistance Committees (PRC). Israel declared the PRC a terrorist organization in 2006. It claims the PRC is funded and trained by Hamas. Its largest attack came in 2011, killing eight Israeli civilians and wounding another 30.

AMP also provided material support to Hamas through its "open fundraising support" for the so-called "humanitarian convoy" Viva Palestina, the complaint said. In 2009, Viva Palestina activists headed by its founder and leader British Parliamentarian George Galloway met with Hamas leaders to provide "funds and equipment." Galloway personally "handed substantial sums of money and equipment directly to Hamas leader Ismail Haniyeh, stating, 'But I, now here, on behalf of myself...are giving three cars and $25,000 in cash to Prime Minister Ismail Haniyeh. Here is the money. This is not charity. This is politics.'"

He is listed as "Research Fellow at the United Association for Studies and Research" in a 1999 article published in the Middle East Affairs Journal, "Occupied Palestine or Independent Israel: 'The Right to Existence' After More Than Fifty Years of Occupation."

In the article's conclusion, Abuirshaid argues against past peace agreements with the "Zionists" including the 1993 Oslo Accords.

Abuirshaid's Israel bashing and affection for Hamas continues to this day.

In a 2015 tweet, for example, Abuirshaid condemned Egyptian President Abdel Fattah al-Sisi's designation of Hamas as a terrorist organization and referred to Sisi's government as "Cairo Aviv" as a rebuke to existing close relations between Cairo and Tel Aviv. 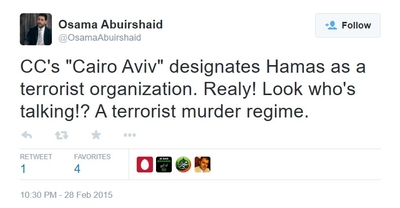 "AMP/AJP ended up with largely the same core leadership as IAP/AMS; it serves the same function and purpose; it holds nearly identical conventions and events with many of the same roster of speakers; it operates a similar 'chapter' structure in similar geographic locations; it continues to espouse Hamas' ideology and political positions; and it continues to facilitate fundraising for groups that funnel money to Hamas," the Boim complaint said.

The upcoming Congressional briefing is a prime example of AMP's anti-Israel, pro-Hamas activism.