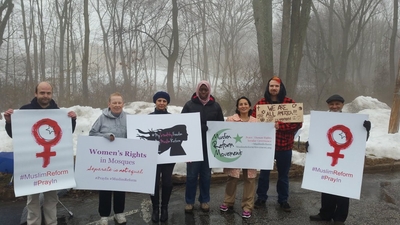 President Obama's appearance Wednesday at the Islamic Society of Baltimore (ISB) drew a small band of protesters, and their issue might come as a surprise.

A group of Muslim women and their supporters stood "as close [to the mosque] as the Secret Service allows to protest the separate and unequal standards inside and advocate for equal rights." 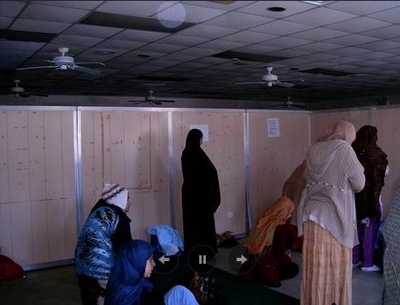 One of the protesters, writer Ify Okoye, used to pray at the ISB but left after unsuccessfully challenging its treatment of women. She took pictures in 2010, showing women relegated to partitioned, drab prayer spaces compared to the wide open space reserved for men.

In a column published Wednesday morning, Okoye and journalist Asra Nomani explained that at the ISB, "women and girls are usually segregated, unable to see the imam unless they peek over the balcony's edge." Women's prayer space is comparable to a hockey penalty box, they wrote.

The separation starts at a young age, with the women describing "girls and boys as young as about 8 years old" being segregated during classes they observed last weekend. The girls were sent to a "stark gymnasium and found seats on bare red carpet pieces laid out in a corner," while boys "clamored excitedly into the majestic musallah, their feet padded by thick, decorated carpet, the sunlight flooding into the room through spectacular windows engraved with the 99 names of Allah, or God, in Islam."

This unequal treatment is all too common in American mosques, they said, citing their own visits to Islamic centers. Obama's "visit to a mosque that practices such blatant inequity represents a step backwards. While it may be meant to convey a message of religious inclusiveness to American Muslims, the visit demonstrates tacit acceptance of a form of discrimination that amounts to gender apartheid," Okoye and Nomani wrote.

It's a form of discrimination that would not be tolerated against other protected groups, they point out, yet segregated mosques continue to enjoy tax-exempt status.

"We are all God's children. We're all born equal, with inherent dignity," President Obama said at the mosque on Wednesday. He missed the call from Okoye and Nomani to "support this urgent cause by speaking out against gender segregation in American mosques."

So, why are you surprised by this gender apartheid? Because it takes place in the US? Silly reasoning. Islam has ALWAYS been grossly sexist. Virtually wherever Muslims pray they are separated by gender - and women get the worse accommodations. That's assuming that women are permitted to pray at the mosque at all, that is. Some countries do not allow women to attend mosques. And some mosques in more open societies also forbid women to enter.

The root problem lies in Islam itself. The entire religion denigrates women, in both the Qur'an and the collections of hadith. Not to mention Muhammad's ugly disregard for females. Among other questionable "examples" he set, the "prophet" had at least a dozen wives, married a six-year-old, had sex with that child when she was nine, approved the enslavement and rape of captive women, said women were deficient in both intelligence and faith, claimed most of the denizens of hell were women (because they were not respectful of their husbands), and said a man's prayers would be nullified if a woman, a donkey or a dog passed in front of him while he prayed, etc.

Tell me, do you REALLY think an ideology that contains these sorts of doctrines is or can ever be made egalitarian? Wake up! Instead of attempting to reform this hopelessly misogynistic creed, LEAVE IT. Take that step for yourselves and your daughters. Women deserve far better than Islam offers them.

They can always return to their own countries that practice their religion. America is a Judeo-Christian Nation, and always has been since it was founded~ no matter who changes or tries to change our history books!

Go complain about it to the Kabba keeper in S.A. Better yet, write a letter to your president about his tacit acceptance of Islamic "misogyny." Oops!...yeah, that's right.....no such thing when it comes Islam in the West. I forgot about those maruna stripes and how Islam is all kumbaya with the left.

Can some one tell me?

Where did Michelle sit for the service?

PROTEST TO THE RIGHT PERSON

It hasn't always been cookies and creme for women here. We had to fight for our rights also. In the beginning, we protested. Women gathered in the hundreds. The problem is they are protesting to our president. Wrong person to protest to. They should be protesting to their husbands and their religious leaders. Like we had to do, quit putting dinner on the table, stop picking up after their men and do it as a group not as one.