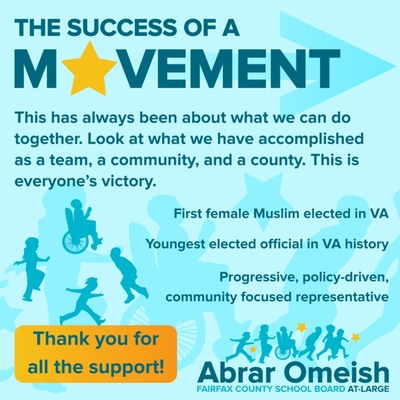 The daughter of one of America's most prominent Islamist leaders became the youngest woman and one of the first Muslim women elected to office in Virginia on Tuesday. Abrar Omeish, 24, won an at-large seat on the Fairfax County school board as part of a Democratic wave that also gave the party control of both houses of Virginia's General Assembly.

"This campaign represents a local movement to set a new standard of public service -- to provide accessible and inclusive leadership that elevates and empowers all people to participate," Omeish said in a statement. "Education is the starting point for all members of our community to access opportunity to meet their potential and we must fight to ensure that every child can succeed here."

Omeish had to resign from a state immigration board in 2006 after the Investigative Project on Terrorism (IPT) released video of him endorsing violent jihad at a 2000 rally. He lauded Palestinians for learning the "jihad way" to achieve liberation. In 2016, he claimed that few Muslims had the same adherence to duty and morals as the Muslim Brotherhood. In 2011, he admitted that he used to belong to the Brotherhood . He's also a longtime board member at the Dar al-Hijrah Islamic Center in Falls Church, which has a history of supporting Brotherhood causes.

While a student at Yale in 2014, Abrar Omeish led the Muslim Student Association's (MSA) effort to silence ex-Muslim and Islamist critic Ayaan Hirsi Ali. She claimed that Hirsi Ali "does not have the scholarly credentials to speak on Islam" and demanded that a planned event featuring Hirsi Ali "be limited to subjects she can speak on from her personal experiences."

Abrar Omeish supports the Muslim Brotherhood-linked International Institute for Islamic Thought (IIIT), which has long endorsed an Islamic supremacist vision of society. Thirty years ago, IIIT's then managing editor of its social science journal, Shareefa al-Khatib, advocated modifying curricula to proselytize. Al-Khatib played a key role in introducing Islam and the Arabic language into the Fairfax County Public Schools in the 1990s.

Omeish discussed her campaign during a February IIIT podcast. She said her religious background would guide her actions should she be elected.

"Just thinking of the ways that Allah SWT's blessings don't come out of nowhere or just because, right? How do we, how do I maximize those opportunities in ways that serve the community and that answer again to being that witness? Ultimately, we will have to answer one day for what we were given, for what we saw, and what we did. So this was one of those very obvious trajectories in my mind that leads to a life of public service, within politics. Again, and again, I come back to wow, I'm really grateful to have a core moral guideline or core moral framework because this game is messy, and can turn into...it's very easy to turn into...to be self-centered, to have an ego, to waver on integrity when it comes to the decisions one makes politically and strategically," Omeish said.

The Council on American Islamic Relations (CAIR) heralded Omeish's win by tweeting out an article saying that she could make history. She spoke last year at CAIR's leadership conference in Arlington, Va. 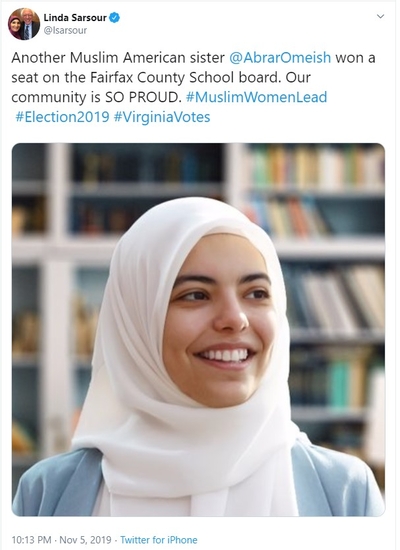 "Muslim American women continue to make our community and country proud. Abrar Omeish won a seat on the Fairfax County School board making her the youngest to ever serve in elected office in VA and one of two first Muslim American women," Sarsour wrote.

"Congratulations mashallah God bless you," wrote Ghassan Hitto, the Syrian opposition's former Muslim Brotherhood prime minister. "I ask God blessed that his achievements be great for all the inhabitants of the state. So proud."

Radwan Masmoudi, president of the Center for the Study of Islam and Democracy (CSID) and member of Tunisia's Brotherhood-linked Ennahda Party, also celebrated.

Abrar Omeish did make history in Virginia Tuesday. Her Islamist ties and statements about religion guiding her priorities in office will merit observation.